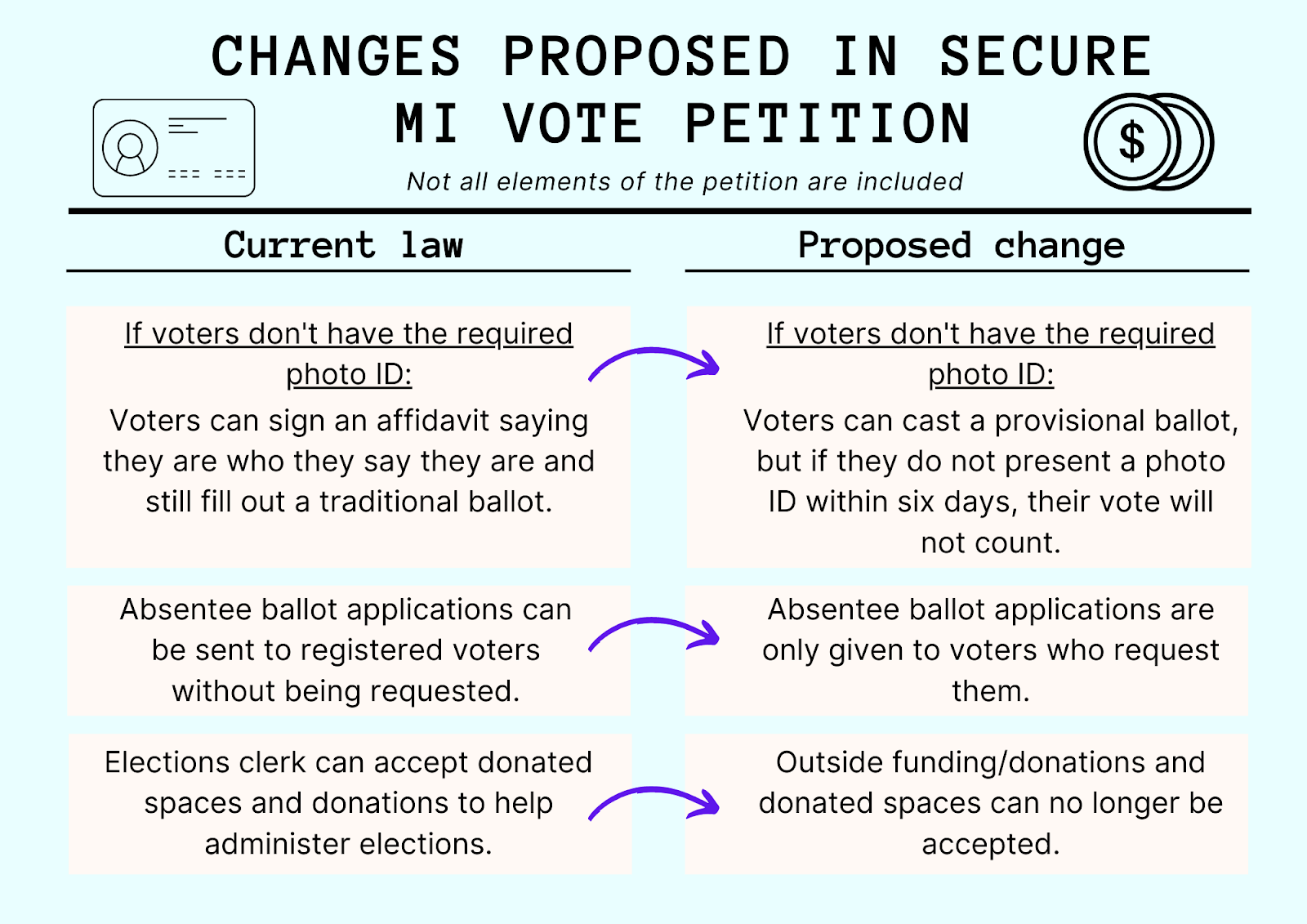 The “Secure MI Vote” petition is making its way around Michigan communities. The petition is designed to change election laws in Michigan, including a requirement for in-person voters to present a partial Social Security number and photo ID. It would also require absentee voters to provide either of these on absentee ballot applications. Any individual who is unable to provide a photo ID would be required to present one in person within six days if their vote is to be counted.

Members of the group circulating the petition say they are a citizen-led organization, but there is no information about their leadership on their website. Various businesses across Michigan have become “hubs” where supporters can sign petitions, pick up petitions, or drop off signed petitions.

Another change this petition would bring to Michigan election laws is the removal of the affidavit option for voters. Under current law, any voter who does not have a photo ID at the polls is required to sign an affidavit swearing their identity under penalty of perjury. With this option removed, voters will have to make an additional trip to the clerk’s office within six days to provide their ID.

Ingham County Clerk Barb Byrum has denounced the petition, saying it will make voting access in Michigan harder for those who are already disenfranchised.

Byrum said Michigan already has some of the most secure elections in the country. She said the petition would not enhance the safety measures already in place, but would instead throw in roadblocks to voting access.

Voting rights groups such as Voters Not Politicians have worked to spread awareness about the petition and the harmful effects it will have on voting access.

“Right now, our focus is on educating the public,” said Hannah Lupi of Voters Not Politicians. “The ‘Secure MI Vote’ petition will make voting harder and will give politicians the power to interfere with our vote and the will of the people.”

Jamie Roe, a spokesperson for the “Secure MI Vote” petition, said the goal of the petition is to reinstate confidence in Michigan’s elections. Roe has worked with Republican campaigns in the state of Michigan since 1990. He worked for Republican John Engler’s campaign for governor in 1990. Roe said he thinks opposition to the bill is unwarranted

“The past two elections we had voters from both sides questioning the election results,” said Roe. He said voters from one side questioned the results in 2016 with questions about Russian interference. Voters from the other side questioned the 2020 result over claims of voter fraud. Roe said this petition will expand voting access with the implementation of the Voter Access Fund which would help supply IDs to those who cannot afford them.

Mark Grebner, Democratic Ingham County Commissioner for District 8 said, “This set of restrictions is not like walls or fences, it’s like uneven parts of the sidewalk. They will trip a few people, but won’t stop people from voting.”

Grebner was elected as Ingham County Commissioner for district 8 in 2017 and has 30+ years of experience in the political sector.

According to the Michigan’s Legislature, petitions must have signatures equal to 8%  of the total votes cast in the prior gubernatorial election to get on the ballot. This would mean that the “Secure MI Vote” petition needs valid 347,307 signatures. Before it makes the ballot, however, legislators have a chance to adopt a plan of their own.

East Lansing Clerk Jennifer Shuster said the most important thing she wants citizens to know before signing the petition is that they are not signing to put these measures before the voters, but sending them to the Legislature. If the petition acquires  enough signatures, it first goes to the Legislature, which can approve the language or create and adopt its own version. That decision is final. It does not go to the governor. Michigan has a Democratic governor and a Republican Legislature.

If passed, the “Secure MI Vote” petition will become law within 90 days of the Michigan House and Senate approving it. With the Republican Party controlling both chambers of the Legislature, the Republican-led petition in Michigan has a good chance at passing.

“It will impact MSU/Ingham county heavily because the majority of students that attend MSU and live in Ingham County cast absentee ballots for their local elections back home, this petition will limit young voters’ ability to efficiently request and receive an absentee ballot.”

My name is Erin Bowling and I'm a junior at MSU majoring in journalism with a concentration in broadcasting.

I am studying journalism at Michigan State University with the intention of covering the NBA. I am a contributing writer for FanSided's Detroit Pistons website. I am a member of the Spartan Sports Report. I expect to graduate in the fall of 2022.

I am a dual-degree student at Michigan State University, studying both journalism and astrophysics. In the future, I hope to be a scientific journalist or write for space institutions, such as NASA. I am strongest in the creative aspect of writing and love to take complicated issues and put them into contexts that are applicable to everyone.

I’m a journalist in Michigan State University’s College of Communication Arts and Sciences expecting to graduate in spring 2023. I’m studying journalism with a minor in public relations and am passionate about communicating with others. I’m working with VIM Magazine as a content creator, stylist and idea pitcher. I want my creative skills to transfer into the business field as I continue to learn and gather a well-rounded skillset.