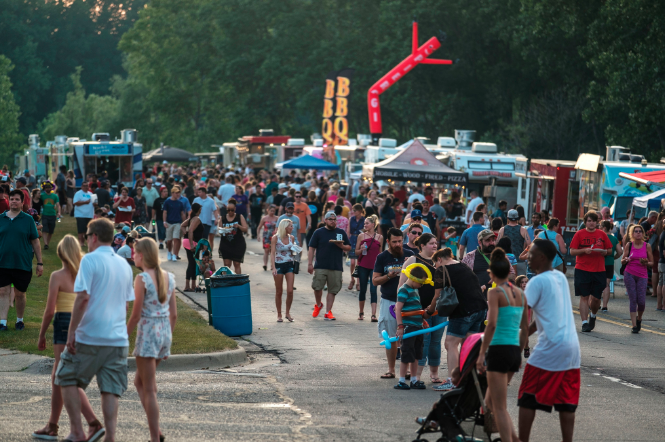 Residents, and local businesses and organizations, raised over $67,000 for the Patronicity Crowdfunding Campaign for the Marketplace on the Green Project. Donors that gave to the project outside of the Patronicity Campaign raised $213,000, totaling more than $280,000 from 156 donors.

Back in Dec. 2018, the Meridian Township Parks and Recreation Department started a $50,000 campaign for the Marketplace. Today, the department has over $280,000 for the project.

The program intends to transform the former market into a new, lively, community-centered marketplace located at the north side of the Meridian Mall, 1982 W. Grand River Ave.

A large pavilion is designed, and the existing parking lot and grass will accompany the new layout.

Local businesses and organizations rallied together to support their community.

The Rotary Club of Haslett-Okemos donated an initial $10,000 to the project.

“We have been wanting to make larger donations to our community for quite some time, and the Marketplace on the Green was a terrific opportunity to do so,” said Michael Nordmann, the iPast president of the club. “This $10,000 donation is a part of our total $25,000 commitment to this project for creating a playground space at the new farmer’s market,” he said.

The club made the first payment for the commitment to get the matching funds from the Meridian Economic Development Corporation. The Meridian EDC agreed to provide a matching grant if the project’s funds reached $50,000 by Feb. 8.

“We are really thankful the township approached us to partner with them, and the Meridian EDC, to really accelerate that giving,” Nordmann said.

“Much of that goes to various projects throughout our community,” Nordmann said. “Our president, John Brewster, is in Uganda spreading some of that money as well, but most of it stays local, and occasionally we take on larger projects, such as this $25,000 total donation to Meridian Township.”

Advanced Rheumatology, PC, a local business, donated to the project as well.

“We really value the farmer’s market,” said Jay Aldrich, clinical research coordinator for Advanced Rheumatology, PC. “We have a lot of patients who are local farmers. We always thought that was a nice way for people who farm in the local community to give their goods to local people.”

Aldrich and the head doctor, Dr. Monika Mohan, are both residents of Meridian Township.

Aldrich said the funds came directly from the business.

“It’s been a rough few years because insurance companies are making a lot of cuts for reimbursements for doctors,” Aldrich said.

Despite financial changes, Aldrich said the business wants to continue to help the community, and keep a focus on healthier lifestyles. He said the new farmer’s market will encourage the community to get outside, and get exercise.

“We were excited for the additional entertainment opportunities this kind of pavilion could bring,” Aldrich said. “We really hope to see a continued value placed on fresh, local produce that comes from our community. Our patient base is the community here so we like helping (them) and giving back.”

Aldrich said he looks forward to what will come from the Marketplace on the Green Project.

“We want to thank everyone who contributed to smashing our goal of $50,000 for the Marketplace on the Green Project,” said LuAnn Maisner, director of parks and recreation for Meridian Township.