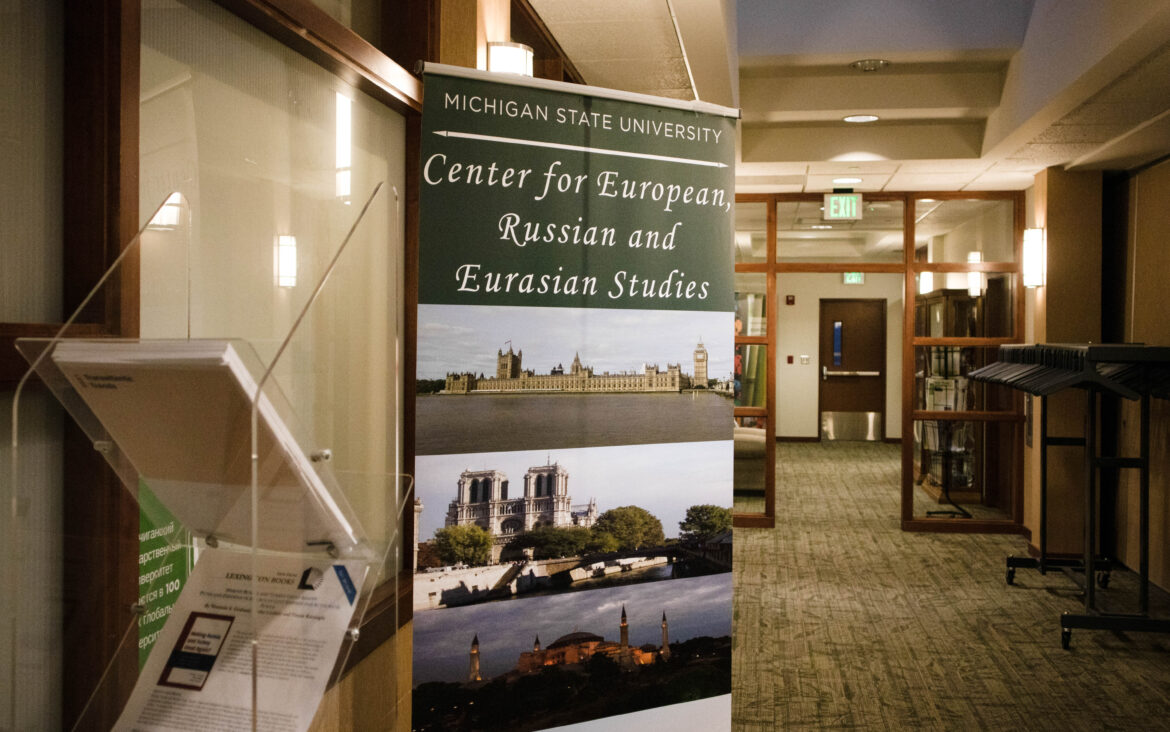 The office of the Center for European, Russian and Eurasian Studies at Michigan State University has been hosting a series of events to help raise awareness about what is happening in Ukraine since Russia’s full-scale invasion on Feb. 24. Discussion about Ukraine at American universities has been on the rise due the war.

Nearly a year after Russia’s full-scale invasion of Ukraine, Michigan State University and other American universities continue to raise awareness about the war.

MSU’s Center for European, Russian and Eurasian Studies has hosted more than 17 teach-in lectures, fundraisers, town hall meetings and other events to explore what is happening in Ukraine and the surrounding region.

Ukraine has rapidly appeared on the curricula of many U.S. universities in the past year, according to Times Higher Education, including University of Nevada, Las Vegas, Indiana University and Vermont’s Bennington College. Timothy Snyder, a leading public intellectual on the issues of Ukraine and a professor of history at Yale University, has made some of his lectures about modern Ukraine available free on Yale’s YouTube channel.

Russia launched a large-scale military invasion of Ukraine on Feb. 24. Although Ukrainian forces pushed Russian troops back from the capital of Kiev, fighting continues throughout western Ukraine and cities throughout the nation continue to be hit by Russian missiles.

At MSU, Volodymyr V. Tarabara, director of the Center for European, Russian and Eurasian Studies, said the center had to react to the invasion and focus its work on Ukraine.

“It was just something that happened in the middle of our region, something of that magnitude, the largest international conflict where our sovereignty is violated, overtly and in such a dramatic way,” Tarabara said. “This is the first event of this kind since World War II.”

Last month, the center hosted a talk with security consultant Natalie Melnyczuk, who formerly worked for NATO in Ukraine..

Tarabara said the center’s lectures have drawn attendees from across the state, although many are members of the Ukrainian diaspora in Michigan.

Michigan State’s Matthew Pauly, an associate professor of history focuses his research on Ukraine, Eastern Europe and Russia, has been doing teach-ins on Ukraine-related topics since the early days of the war.

However, Pauly said public interest in Ukraine is declining.

“There was very heightened interest, obviously, in February, March, April. And I think that interest to some degree has tapered off,” Pauly said. “I’m not seeing nearly as many announcements of such events.”

Michigan State graduate student Dmytro Shynkaruk, who is from Ukraine, attended some of the events organized by the Center for European, Russian and Eurasian Studies. He said these events show that Ukraine is on the agenda at Michigan State, but he wishes the university did more.

“I would like the university to pay more attention to what is going on in Ukraine, in Iran and in other countries,” said Shynkaruk. “Because we are all related. People thought Ukraine is far and, like, ‘Let the war be, it won’t touch me,’ but somehow they found out that some countries will be starving without Ukrainian grain. It’s all connected, we’re not isolated, no man is an island.”

Tarabara said that it is important to think about what academics and universities can do in the wake of these traumatic events.

“We have a democracy, right? And ideally, political decisions are made by responsible citizens,” Tarabara said. “Our people live their lives, go about their business, and yet they participate in a democratic society. They participate in political life. After all, that’s what the purpose of education is at large. To educate responsible citizens, who can make decisions in a way that’s informed.”