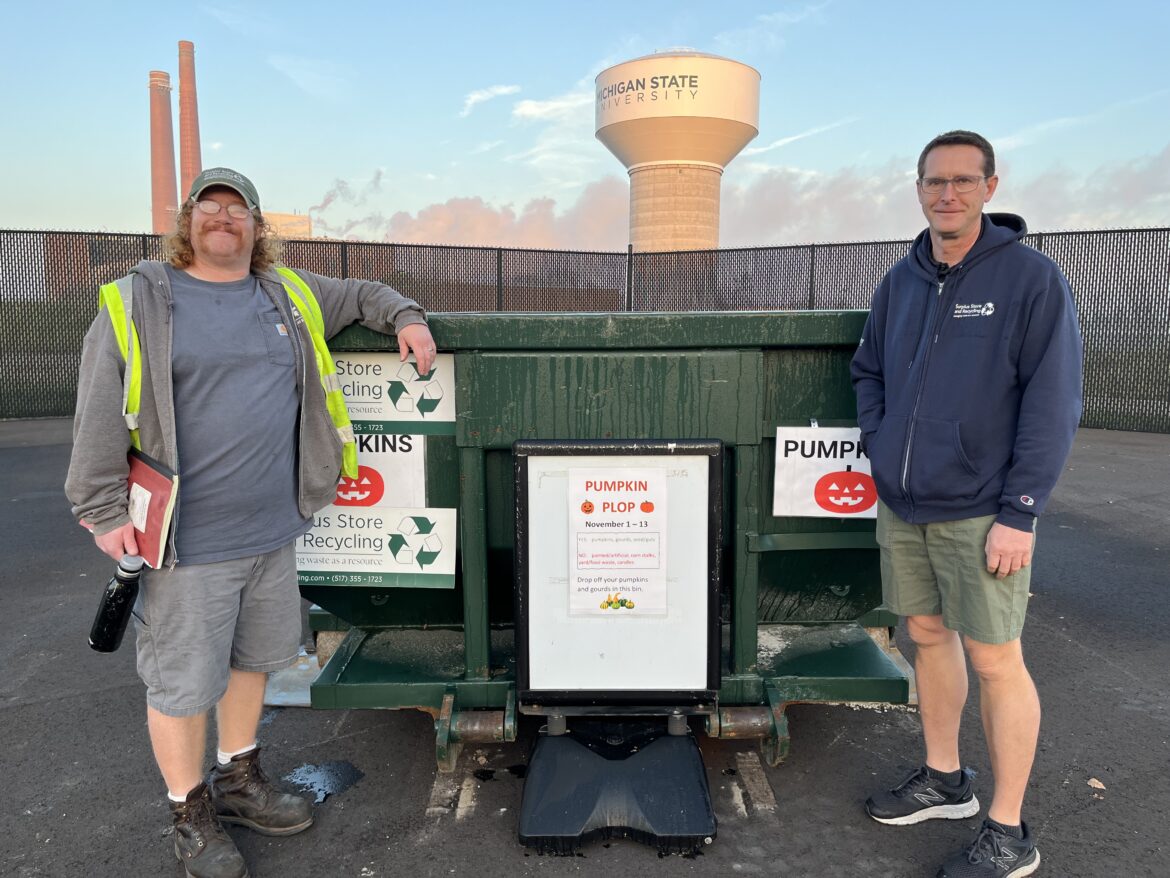 Across the street from the MSU Surplus Store and Recycling Center sits a large, open dumpster with a pile of discarded pumpkins and squash inside. Some are carved, some are crumbling, and others have broken into pieces. The dumpster will be filled to the brim at least once before it is dragged away and its contents are dumped out to be used as compost.

This is the basis of the Recycling Center’s 2022 Pumpkin Plop, an initiative that invites East Lansing community members to dispose of their old pumpkins and squash from the Halloween season in an environmentally friendly fashion.

“Pumpkins are a good organic material that could be diverted from the landfill,” said MSU Recycling Center operations supervisor Sean Barton. “The community didn’t seem to have many outlets for pumpkins, and they’re something that has minimal contamination, pretty easy to divert from the landfill.”

The Pumpkin Plop offers an alternative to throwing pumpkins away, allowing them to decay on a front porch, or smashing them in the street.

“The sound is great of a smash, but you can get a similar sound throwing it into our bin,” Barton said. “That’s why our bin exists as an alternative to the street littering of pumpkin.”

Recycling coordinator Dave Smith said the Pumpkin Plop is particularly beneficial for students, who may not have a proper way to dispose of their pumpkins once they start to decay.

“We have a lot of students that live in the dorm, or they live in apartments,” Smith said. “Most of them have a pumpkin, they go to a local cider mill or something around here, they get it, it’s sitting in their dorm room or on their patio at their apartment complex, but they don’t have curbside yard waste disposal like some of the residents do in the area. So this is a great program for them to be able to bring that material here and make sure it gets recycled.”

When the bin is full it will be wheeled back behind the Recycling Center, where the composting process will produce nutrient-rich soil. The first step? Crush the pumpkins to speed up the process of decay.

“You have to crush them with a Bobcat bucket, smack them or hit them with a rake,” said Julia Haidler, a vermicompost operator at the Recycling Center. Without this step, the pumpkins would take much longer to decompose.

The pumpkins are added to a compost pile of leaves and food waste from MSU dining halls. Microbes in the pile give off heat as they break down organic matter, which enriches the soil and helps decomposition happen faster. A large thermometer is stabbed into the pile and left there to monitor heat. The pile is currently at 90 degrees Fahrenheit, Barton said, but will likely reach 160 degrees Fahrenheit the next time the pile is turned over. Composting is a long process – after around six to eight months and a screening process to remove rocks and other objects, the resulting soil will be full of nutrients and ready for use. Much of it will be sold at the Surplus Store, Haidler said.

Smith said some of the soil is also donated for use on campus. In the past, the Recycling Center has donated soil for use around the Sparty Statue and in the W.J. Beal Botanical Garden.

The Recycling Center, at 468 Green Way, will be accepting pumpkin dumps through Nov. 13. Smith said pumpkins can also be composted at home, but the Pumpkin Plop offers an easy alternative to those without home composters who  want to dispose of their pumpkins in an eco-friendly way.

“It’s pretty much like when you’re growing up and you roll the pumpkins down the hill, and that’s how they decompose, it’s harnessing that and recycling that in a facilitated process instead of sending all of that to a landfill,” Haidler said. “We’re gonna get a full bin and be able to recycle all of it.”

Jack Armstrong is a journalism student from Detroit. He works for The State News as senior culture reporter and as a reporter at Great Lakes Echo. Jack has an interest in nature and environmental journalism.