In recent weeks, Americans have felt the consequences of the Russian invasion of Ukraine and other dynamics at the fuel pump. According to AAA gas price data, Lansing residents can expect to pay an average of $3.81 per gallon of regular unleaded fuel, down from last month’s average of $4.14 but far above last year’s average of $2.82.

THE PROBLEM WITH GAS

A lack of commute options forces many into costly alternatives. When gas prices go up, it ultimately reduces how much workers are taking home.

“I drive from my apartment to campus three days a week there and back, and also work Mondays and Fridays,” said Delongchamp, “I feel like I don’t make as much profit from my work anymore because I have to budget more for the insane gas prices in Lansing.”

Scott Stewart, an East Lansing DoorDash driver has been forced to adjust to higher gas prices.

“I have to be a lot more picky with the orders I take, making sure that the pay per mile is high [enough] so I can actually make money on it,” Stewart said. “So I end up taking fewer orders, making less money per day. I still make money, I just have to work longer hours or more days.”

“We have seen an increase in interest over the past 2-3 years,” Calnin said. “While I’m not sure if recent business can be directly attributed to the Ukraine situation, the biggest fear around rising gas prices is whether or not it’s permanent. In 2008, during the recession, we saw gas prices rise, then they stayed high.”

According to the 2020 U.S. Census, 38% of Lansing residents are at or below the federal poverty line – considerably higher than the 11% national average. This large population is vulnerable to the 35% increase in fuel prices occurring in the past several weeks.

Also unique to Lansing are the various ways residents commute. The City of East Lansing reports 37% of residents don’t drive to work. Breaking the numbers down further, 22% walk, 9% bike and 6% utilize public transit such as CATA buses. In comparison, the U.S.  Census Bureau says 86% of Americans primarily commute via car. 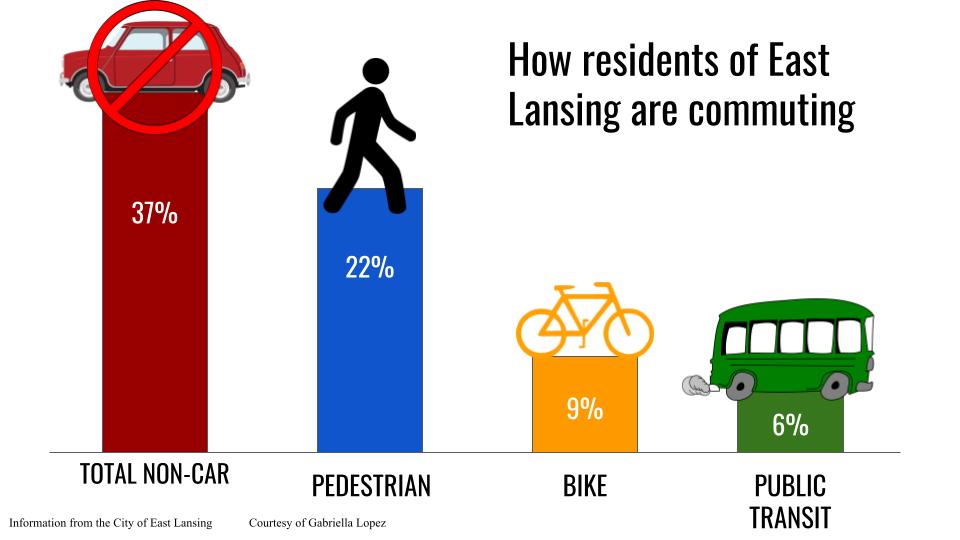 With an existing culture of non-car commuting and rising gas prices, East Lansing seems primed to move away from car transport.

“It is hard to say if the gas prices contributed to the increase in ridership, but it is definitely a possibility. The ridership on our buses has trended upward since the beginning of the current semester,” Robison said.

MSU freshman Sophie Scureman-Stoops said she likes taking the bus to get around East Lansing.

“I have a car but I don’t use it that much, it’s a hassle, I have to take the bus to get to it anyway.” Scureman-Stoops said. “I could drive, but with gas being so high, I don’t want to pay all that money.”

CATA does provide a cost-effective mode of transportation to students and East Lansing residents, however gas prices have cut into the transit operator’s overhead.

While CATA staff have not announced any increases  in rider fares, such an increase in fuel prices presents a 32% increase in operating costs. While bus transportation is a cleaner, more efficient and more convenient option to cars the economy behind bus operation is still built around the cost of oil.

Electric vehicles are being added to almost every major car manufacturer’s product lineup. As the EV becomes more popular, municipalities must construct the infrastructure required to allow citizens this option.

Michigan Clean Cities supports a creative way EVs can be used that reduces both carbon emissions and financial burdens on drivers: car sharing.

Car sharing is being offered by companies such as ZipCar where customers can rent cars or specialty vehicles for short periods of time to run errands or haul large items.

“We look at a lot of businesses,” Calnin said. “When people go shopping, go to work or run errands, they’re parking their cars for two, three or more hours. It’s a prime opportunity to charge your vehicle.”

The City of East Lansing has a bronze rating in bike-friendliness by the League of American Bicyclists. East Lansing’s most recent report card from the LAB suggests Bronze-award standards don’t necessarily reflect truly a bicycle friendly community.

With a mere 15% of the city covered by the network, no advisory committee, and biking regulations rated as “acceptable,” it seems a bronze rating simply reflects that a community has  some biking infrastructure.

Michigan State’s campus, independent of East Lansing, has a gold rating with more than 70% bike network coverage. A glance at a Michigan Department of Transportation bike-lane map shows that East Lansing’s only bike lane is a branch of the Lansing River Trail, a route better known for nature walks rather than daily commutes. This means that East Lansing residents, not attending MSU, have little to no access to municipal bike infrastructure.

“I bike mostly because it’s faster than walking and I don’t have a car at school with me,” Armstrong said. “I love biking because it is better for the environment, healthier for me and it’s usually more fun and more efficient than driving,”

MSU sophomore Alexis Mohney said, “People move over for you when you bike because there’s so many bikers here. And I feel bad that I drive my car so much to campus. Plus, the cost of driving constantly is getting to be too much. Biking is just my way of giving back to the environment while also saving some money.”

Two members of the East Lansing Planning Committee expressed no real plans for increasing bike infrastructure within the city.

Gabriella Lopez is from Norton Shores, Michigan and is a journalism major at Michigan State University. She is preparing to graduate in the spring of 2024. Her journalistic interests include public relations and fashion reporting. She hopes to become a public relations professional for a large-name fashion brand.

Cami Anderson is from Chicago and she is a journalism major at Michigan State University. Her journalistic interests include broadcast journalism, entertainment and fashion journalism, writing and public relations.

Journalism major at Michigan State University focusing on international broadcast reporting, with a minor in public relations. Always looking to expand my knowledge and seize the day!

Madison Norfleet was raised in Denver, Colorado. She came to Michigan State University 2019 to pursue a degree in journalism. Her interests include photography and environmental issues. Her work has appeared in the Spartan Newsroom and The State News.