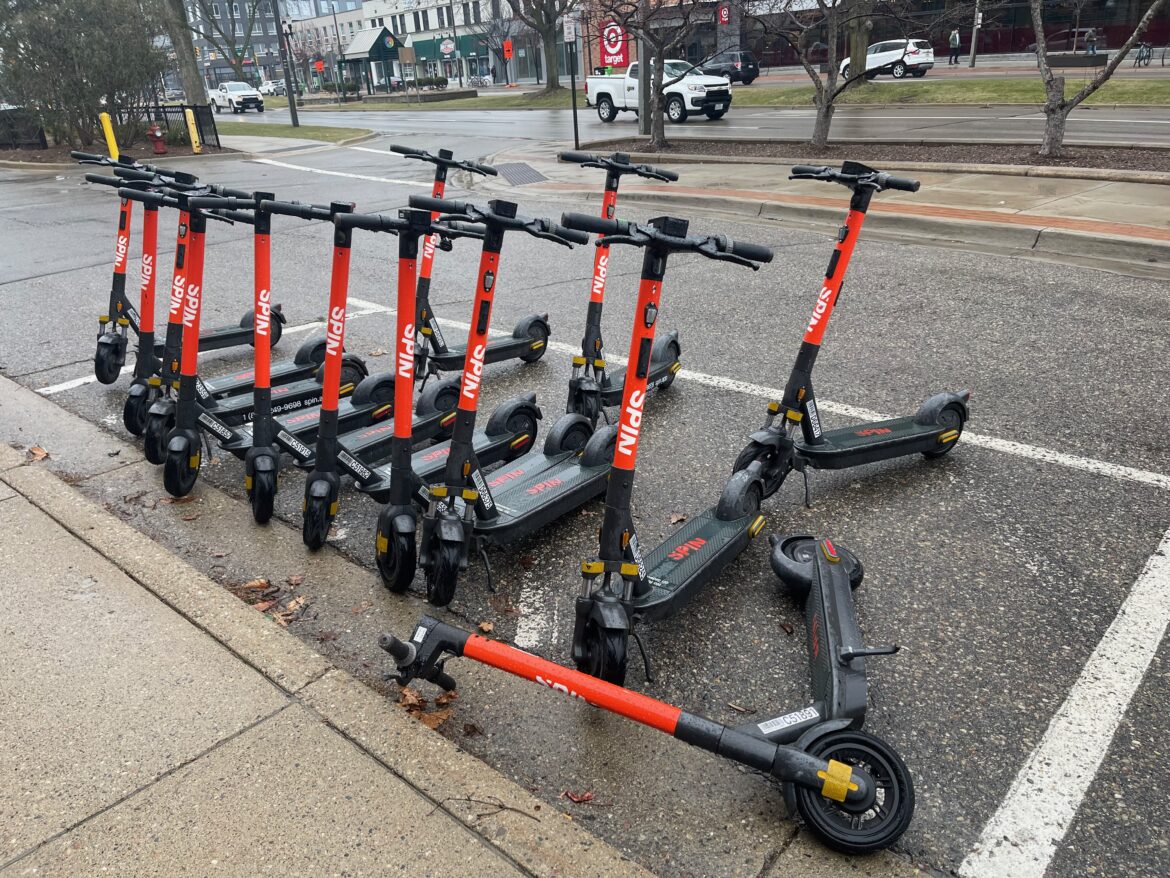 As frequent rain washed away the remaining mounds of snow along roadways, East Lansing residents may have noticed the not-so-subtle return of the many electric scooters once again lining (and often obstructing) sidewalks.

With a top speed of 15 mph, the Bird and Spin electric scooters littered across the city provide a convenient alternative to public transit and walking –  allowing users to take advantage of bike paths and similar infrastructure without the hassle or maintenance that comes with owning a bike or electric scooter yourself.

Despite their convenience and popularity, electric scooters present some safety concerns in a city so reliant on cars. MSU Police Department Sgt. Kimberly Parviainen explains, “[Drivers] aren’t expecting something faster than someone walking to suddenly jet out in front of them. I worked night shift for 10 years, when I started driving during the day again I almost hit someone on [a scooter] they just came out of nowhere.”

Pedestrians are worried as well, MSU freshman Shreya Chavva expressed concern over how fast scooter users travel on sidewalks, “it’s scary, you don’t hear them sometimes because you have headphones on and suddenly, whoosh.”

Even scooter users themselves aren’t safe, “My friend broke his arm on one.” said MSU freshman Laasya Koduri, “he just turned too fast and wiped out.”

As Spin and Bird were  founded in 2016 and 2017 respectively, legislation has  yet to catch up with them. “There are no specific ordinances regarding the use or parking of [electric scooters,]” said Sgt. Tom Wachowski of the East Lansing Police. “They’re technically not supposed to move faster than pedestrians, but neither are bikes and we don’t stop them. As long as you’re traveling at a safe speed, the police won’t bother you.”

Michigan State however, does have an official ordinance regarding electric scooters. It lays out guidelines regarding the use of electric mobility devices including the prohibition of riding with two people on a scooter made for one, a regular sight on campus.

Despite these safety concerns, neither MSUPD or ELPD reported any major incidents related to the use of electric scooters. Both departments recommend that users wear a helmet and exercise good judgment while riding electric scooters. MSUPD mentioned that Spin users can receive a free helmet from the company for filling out the safety quiz on Spin’s website.