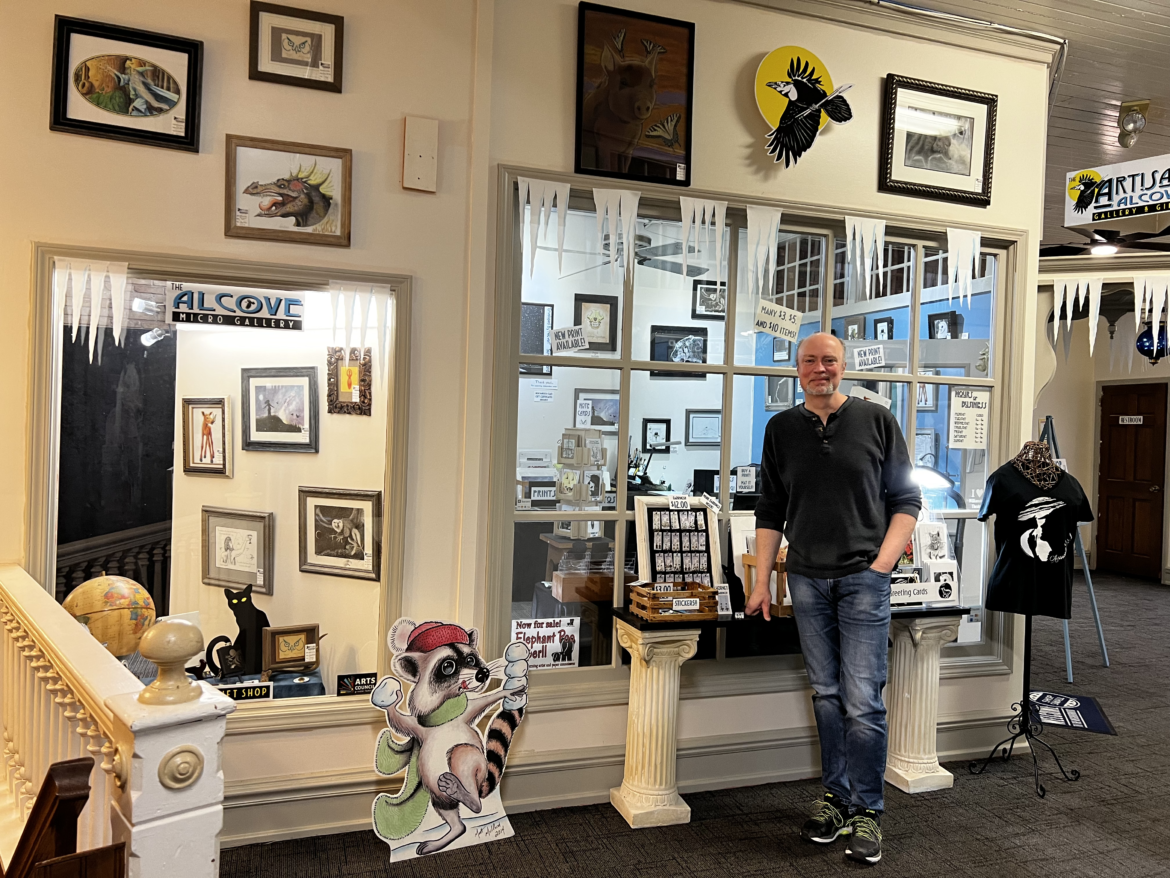 Owner of the Artisan Alcove poses in front of the path visitors pursue to access the studio’s entrance. This space hosts several of the communities artistic showcases.

Williamston residents and business owners boast about their walkable town that flexes its creative muscle even amid rebounding from COVID-19.

Galleries, farms, and unique gift shops support other’s effort to engage locals at events as they recover from pandemic-induced setbacks. Entrepreneurs of Williamston are working toward resetting the norm.

“Creativity, imagination, and inspiration are extremely important to me. No matter what it is you’re doing you have to be creative just to survive. I think people feed off that from the work that I do,” said Matt Mulford, a Lansing resident and owner of The Artisan Alcove Gallery and Gifts.

Going on seven and half years, Mulford dedicated his efforts toward conducting the promotion for events like the Williamston Pop Up Arts and Craft Show. His hope is to do more themed art shows similar to a past festival presenting art of birds native to Michigan.

Mulford recalls that “People come in and act kind of surprised, and they’ll ask if it was more than one artist besides just me.”

Mulford’s versatile style in the form of multiple mediums covers several genres. Some of his best sellers range from cute animals to realistic wildlife to fantasy art.

His gallery doubles as a teaching space where he guides about four young artists in lessons weekly. Mulford hopes to continue offering group art classes but is conducting 1-on-1 courses in adjustment to COVID.

“I always ask if there are things they’re struggling with or things they want to focus on for the classes…anything from anime art to cartoon art. But I do try to introduce the kids to other styles to help them branch out into other interests,” Mulford said.

“We’re really trying to work on Williamston, we’re trying to build it up as far as the creative side of things. It’ll be really booming for a couple of years, and then it’ll drop off again and kind of come back up,” said Mulford.

A farm for friends

Kate Campbell, on top of being a nurse, runs the Williamston Alpaca farm, located at Circle 6, hosting a total of 23 alpacas.

“Most people don’t have a store off the farm, usually they just have a store on the farm that’s open seasonally, while we’re open everyday of the week, all year long,” said Campbell.

Campbell’s booth shares the space of multiple vendors across the antique and gift spectrum.

“I add to their traffic and they add to mine,” said Campbell.

She attends community events like parades or Art in the Park to feature her ponies and alpacas, or as she calls them “farm ambassadors”.

The soft, thick wool her alpacas yield allows her to sell goods like clothing, yarn, roving wool, stuffed animals, and alpacas themselves. Campbell urges that “Alpaca socks are to die for.”

Business for Campbell experienced positive growth due to the support of Williamston that she said has a nurturing culture for small businesses.

She recounts a time when the movie theater was closed and her family would buy popcorn to continue supporting during low points of the pandemic.

“The other vendors have let me use tables and things like that especially when I was new and getting started. I love it and it’s really cool. I try to support other farmers,” said Campbell.

Will Long the chair of the Downtown Development Authority board and Vice of Chamber opened up the Studio Shop in 2015.

Long said he started as a photographer with a skill set in graphic design but found a niche his audience and community would be more receptive to: man-made designs.

He noticed a pride Michigan natives had for their origins. In 2018, the Studio Shop transitioned into selling Michigan-made merchandise.

The shop for gifts unique to Michigan enthusiasts now has machinery capable of executing customization such as laser engraved designs.

Over 70% of merchandise sold by the Studio Shop is made by the business itself.

Long believes people are more willing to buy things that represent where they’re from.

The 39-year-old says his hopes are high for the future of Williamston particularly under the leadership of their new city manager, John Hanifan. He acknowledges the empty storefronts within the downtown area and expresses he would like creatives to make their way into Williamston to aid in their strides toward expansion

Long says the DDA is supportive of businesses curating community gatherings similar to those Campbell and Mulford participate in.

Williamston looks forward to a summer event called the Red Cedar Jubilee. The DDA will launch their initiative called First Weekends featuring a town event for the first weekend of every month.