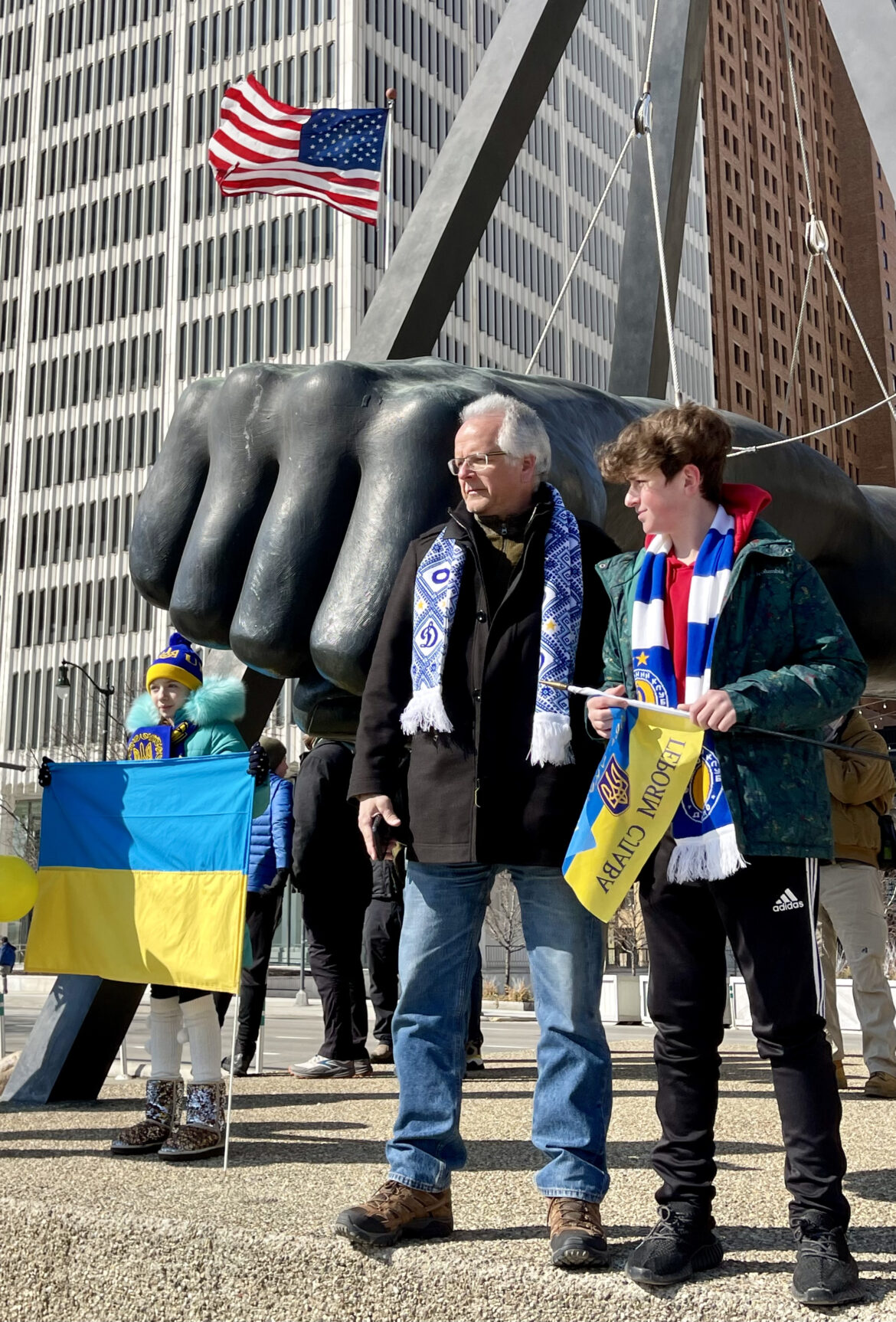 Detroit’s Hart Plaza was filled with Ukrainian  blue and yellow Sunday as more than 1,000 people took to the streets to protest Russia’s invasion.

Since the invasion began Feb. 24, there have been widespread calls for peace and an outcry against the Russian aggressors. In Detroit, people raised their voices, filled the sidewalks and marched from Hart Plaza through Campus Martius and back.

The crowd often broke into song and exchanged cheers of “slava Ukraini” (glory to Ukraine) and its common response, “heroiam slava” (glory to the heroes). People in the crowd carried flags, balloons and signs. Many signs showed support for Ukraine and its troops. Others threw insults toward Russian President Vladimir Putin. and several signs demanded that the Ukrainian sky be closed, as is being requested by the Ukrainian president, Volodymyr Zelensk.

Alexandra Klemesheva was one of many demonstrating in Detroit on Sunday. She said she has family not far from Ukraine’s capital of Kyiv. Klemesheva said she has already donated to help the Ukrainian cause and was thankful for this opportunity to show further support.

“It makes me feel like I am helping, even though I’m still far away in a safe place,” Klemesheva said.

Above the sound of the crowd, horns of passing vehicles honked. Dozens of semi-trucks, many decorated with Ukrainian flags, circled for more than an hour, honking their support.

“There are a lot of Ukrainian truck drivers in this country,” said Anya Nona, who helped coordinate the demonstration.

Nona said many of the trucks were in Chicago for another protest the day before and stopped in Detroit on their way to another event in Washington, D.C., on Monday.

“They are a force to be reckoned with,” Nona said of the group of drivers.

The turnout, truckers and demonstrators alike, was more than the organizers had anticipated.

“It is incredible,” Nona said. “I knew there was a huge [Ukrainian] community in Michigan… I really was not expecting this amount of people today, and it’s moving.”

Bohdan Pryjma is a first-generation Ukrainian American who has been learning about Ukrainian culture his whole life while living in America. He is part of a historic Ukrainian choir who he toured Ukraine with in 2018.

He described the Detroit demonstration as “probably one of the best moments of my life,” Pryjma said. “To see the support is amazing.”

I am a Michigan State student in the class of 2024 pursuing a degree in Journalism with a concentration in Sports Reporting and a minor in Photography. I have a strong affinity for both print and visual media and I am looking forward to furthering my expertise in both as I continue my education! In the future I could see myself writing about or working for a professional sports organization.