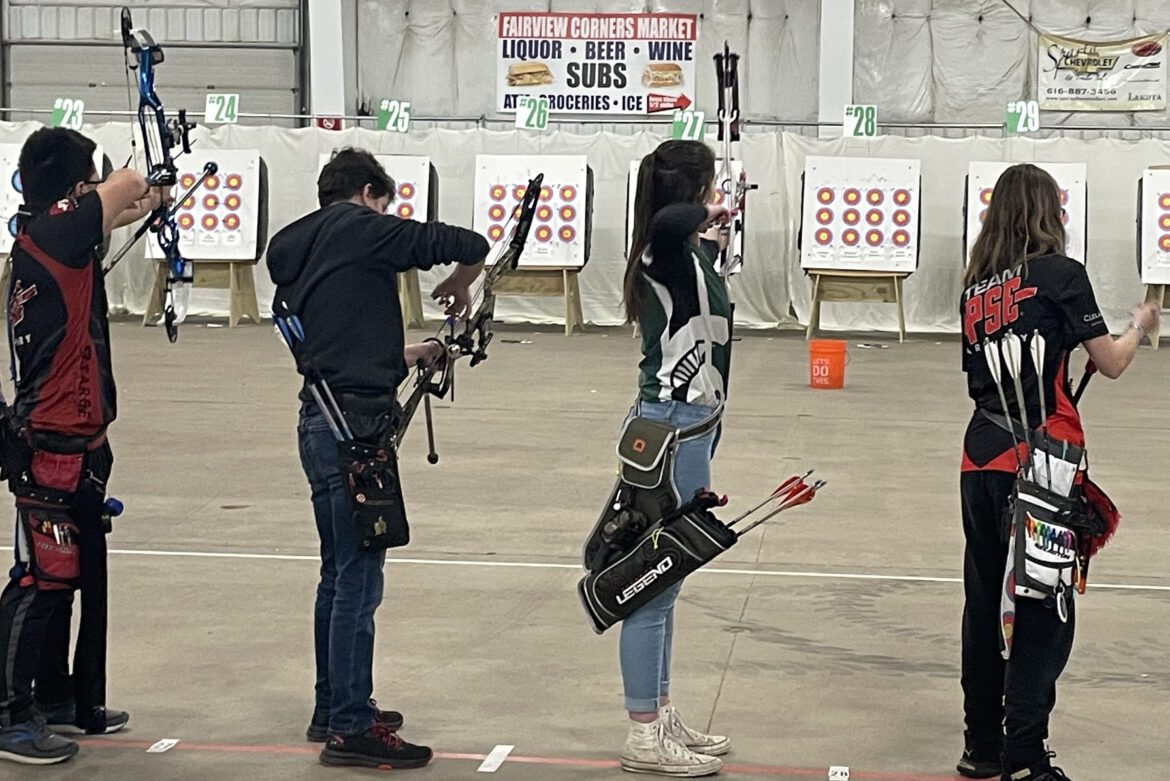 Tripp focuses on the bullseye as she gears up to take her shot. She has been practicing archery since she was a young girl.

The sound of arrows clacking sounded out as archers prepared to shoot. People of all  ages positioned themselves in a horizontal line, bowstrings pulled back as they focused on the bullseye. For many archers, it was their time to shine.

On Feb. 25-27 archers competed at the JOAD Junior Olympic Archery Development Indoor Nationals and the 53rd National Indoor Championship at the Ingham County fairgrounds hosted by the MSU archery team and the Greater Lansing Sports Authority. “This event is a national event for USA Archery,” said Eric Beaudry, 31, onsite tournament director. “We are one of 13 locations across the nation that’ll be combined at the conclusion of this event to crown national champions.”

“JOAD is the junior olympic archery development. So it’s the youth program that allows archers to get a taste of the national event with only shooting half of the rounds. So nationals is a 120-arrow round whereas JOAD is only 60 arrows,” said Beaudry.

Annaleise Tripp, 21, president of the MSU Archery Club, has been shooting since she was 6 and has been competing since she was a sophomore in high school. “I’m pretty happy with how I’m shooting right now,” said Tripp. “After this you get put into national rankings and I think for college if we are in top 10 or top eight we can shoot an extra part in the NFAA indoor championship that’s in Louisville in a couple of weeks. I am already going to that shoot.”

Multiple ages and genders participated in the competition. “Leagues are divided by age, gender, and division (based on the equipment used). As well as paralympic divisions offered,” said Beaudry. There were competitors aged  5 to 76, according to Beaudry.

Planning the event takes a long time. “I’m already planning for next year. It takes a lot of coordinated effort between the team, the Greater Lansing Sports Authority and the community, and USA Archery to provide a successful event,” said Beaudry.

Competing in archery on a national level is hard work. Tripp said she normally practices for around five hours a few times a week.

Jennifer Dawson, 48, is coach for the Ground Zero Archery team that competed in the event. Although this competition is an individual event, teams still came with individual members competing. Dawson said, “The team’s doing pretty good. We’ve got a lot of first-time archers so they’re experiencing the USA scene for the first time, doing really well, working mentally through their thought process, maintaining their shot cycle, and overall just having a really good time and excited about continuing.”

There is a small monetary prize for the winners of the competition. Many archers that put in hard work will be paid off at the end. Beaudry said, “The winners will be crowned national champions, and select divisions utilize ranking points from this event to combine with outdoor events which will determine the USA world team.”

Jaclyn Sellentine is a journalism major that transferred to Michigan State University in 2021. Her journalistic interests include environmental science, health, and political reporting.