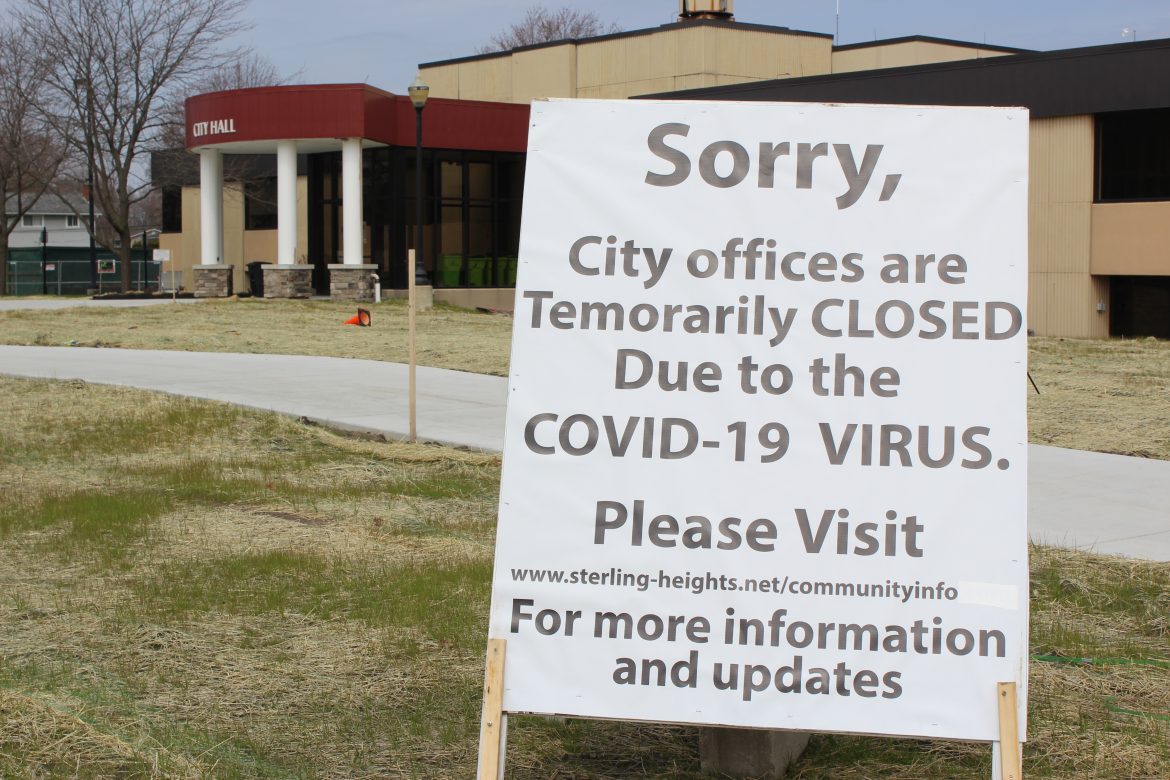 A sign posted outside of the Sterling Heights City Council building that reads, "Sorry, City offices are Temporarily CLOSED Due to the COVID-19 VIRUS. Please Visit www.sterling-heights.net/communityinfo For more information and updates.

In Michigan, all eyes are on Gov. Gretchen Whitmer to see how she responds to the COVID-19 outbreak. But when it comes to searching for an end to the pandemic, it’s local governments that are on the front lines, said Mason Mayor Russell Whipple.

As of April 25, Michigan has the seventh most confirmed cases in the United States with 36,627, according to the Centers for Disease Control and Prevention. As of April 8, Michigan was third behind New York and New Jersey.

Michigan municipalities are navigating Whitmer’s stay-at-home order by transitioning whatever work they can to online platforms, including using Zoom for meetings.

This is true of the city of Mason, Whipple said. Currently, people visit city hall only for mail runs and other essential  business, all with strict protocols.

The 32-member paid-on-call fire department is working to reduce contact between department members by limiting time spent in the office. Additionally, only around half of the department is actively responding to any calls, all of which have been small so far.

The city has implemented expectations of social distancing for essential workers, like those at the city’s water treatment plant.

“It was a historical event, it has never happened before,” he said. “Nothing like this has even been contemplated.”

There were 16 to 18 people logged into the Zoom call who were not members of the government, an abnormally high number for the city, Whipple said.

As cities have worked to keep their employees safe while remaining accessible to residents, many have taken to video teleconferences.

This is true of Ann Arbor, which experienced its  first online council meeting April 6.

“In my view, these meetings have been effective and I think able to reach and enable the participation of residents who might not otherwise be able to attend a city council meeting,” he said. “There’s a benefit to meeting in person, but at the same time, there’s a limited set of people who have the economic, family, and transportation freedom to spend three, four, five, six, seven hours with us at city hall on Monday nights. And the expansion of the set of people who can participate, I think is an important one.”

The city responded to the pandemic by removing permits for group events, reducing services at city hall and eventually closing the whole building. As the crisis has persisted, all essential meetings are held via Zoom.

As the crisis persists, Taylor said it is important for local governments to plan and prepare for the different possibilities that COVID-19 may present.

As local governments have been tackling the tasks of transitioning to working remotely and trying to protect workers who can’t, they are still assisting their residents in whatever ways they can.

The “overwhelming majority” of staff members are working from home and are able to do all of their normal work, Davis said. The city is also engaging in daily departmental briefings where the city manager, assistant city manager and directors meet to make sure everybody is on the same page.

The city has also created a senior hotline to help elderly residents who are at a greater risk of fatality if they were to contract the virus. The volunteer-based program allows seniors to call if they need assistance with anything from grocery delivery to sharing internet sources. Seniors would be paired with volunteers.

As of March 25, there were over 60 volunteers and the numbers continued to grow. The hotline has been promoted via cable advertisements, social media and newspaper advertisements.

Under normal circumstances, the Sterling Heights Public Library required that residents would have to physically visit with proof of residency to get a library card. Now, residents can apply for library cards online and access online resources.

The City of East Lansing has been working to help the community through the COVID-19 crisis.

The city is working with the tri-county office on aging to share information about meal distribution for elderly residents, and their senior programs have been reaching out to community members, Communications Coordinator Mikell Frye said.

The city is also looking to help the business community. This began with a business resource page that provides information for businesses and how the city can support them.

The city has also worked on maintaining communication with the community, publishing a weekly COVID-19 newsletter.

“We’re trying to keep the community as informed as possible,” Frye said.

The community has been receptive, she said.

“I think at this point, the stay-at-home order is across the board. We’re all in this together,” she said. “This is something new and unprecedented, so there are things that we’ve had to adjust along the way, but I’d say for the most part people have been positive and receptive to what we’re doing. I think they understand this is for the common good and this is to save lives.”

The relationship residents have with the government and emergency response personnel has been helpful to maintaining a mutually beneficial relationship in Shelby Township as well, Community Relations Director Brad Bates said.

“When we need their help or they need our help, it’s just a very open two-way conversation and it’s just more of that as we go through here,” Bates said.

The township already had systems in place, such as a speaker system to share news, being a Meals on Wheels stop and being a hub for the Smart transit service.

“We’re very happy, I guess, with where this situation is showing where our service level is at, and we’re looking at maintaining that high level of service,” Bates said. “A we see new needs arise to whatever the new normal ends up being, we’re well positioned to address those better.”

Additionally, the township has been accommodating residents so business can go on while maintaining social distancing or allowing people to stay at home, Shelby Township’s Bates said.

“We’ve been adopting new practices and new tools and making it so we stay as available as we can,” he said.

Now that Whitmer’s stay-at-home order has been extended to May 15, local governments are maintaining critical infrastructure like electricity and water.

“When people talk to me about the pandemic, of course we focus on the loss — the loss of normalcy, the loss of economic benefits, and the loss of health and life,” Taylor said. “These are serious and weighty things to consider, but it’s also true that people like to find a bright side, and time and time again people have expressed to me their renewed commitment to community, their renewed appreciation for folks at city hall, folks in grocery stores, folks in hospitals who come to work every day and never imagined that they’d be on the front lines but nevertheless are committed to service.”

Karly Graham is a journalism student at Michigan State University expecting to graduate in 2022. Along with a BA in journalism, she is earning a minor in Public Relations and a minor in Leadership and Integrated Learning through MSU's Bailey Scholars Program. She has worked as the academics reporter, administration reporter, city general assignment reporter and staff reporter for Michigan State University's independent newspaper The State News. She has also served as a marketing intern for Amerisure Insurance and as a creative writing intern for Piximotion Digital Marketing company.