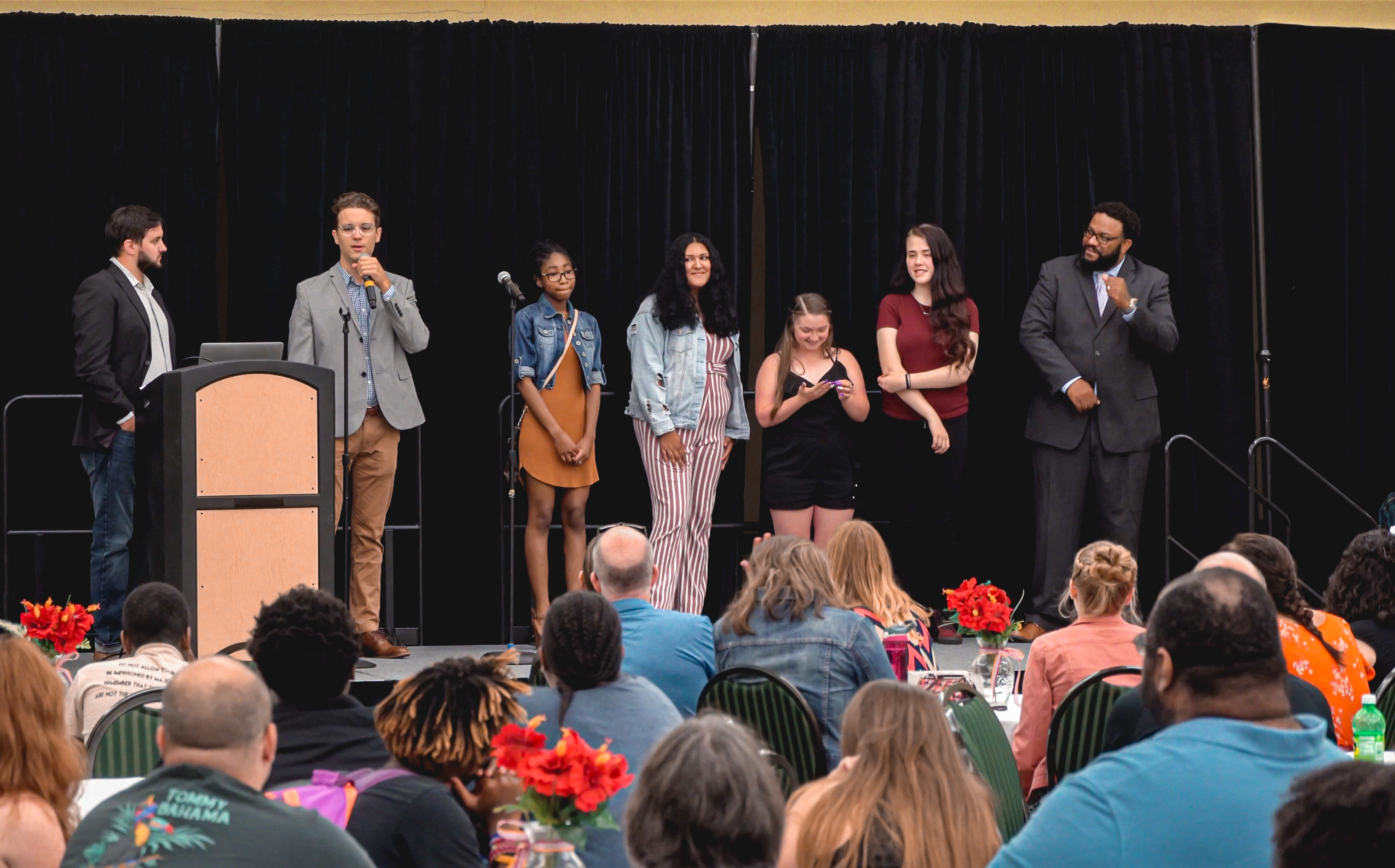 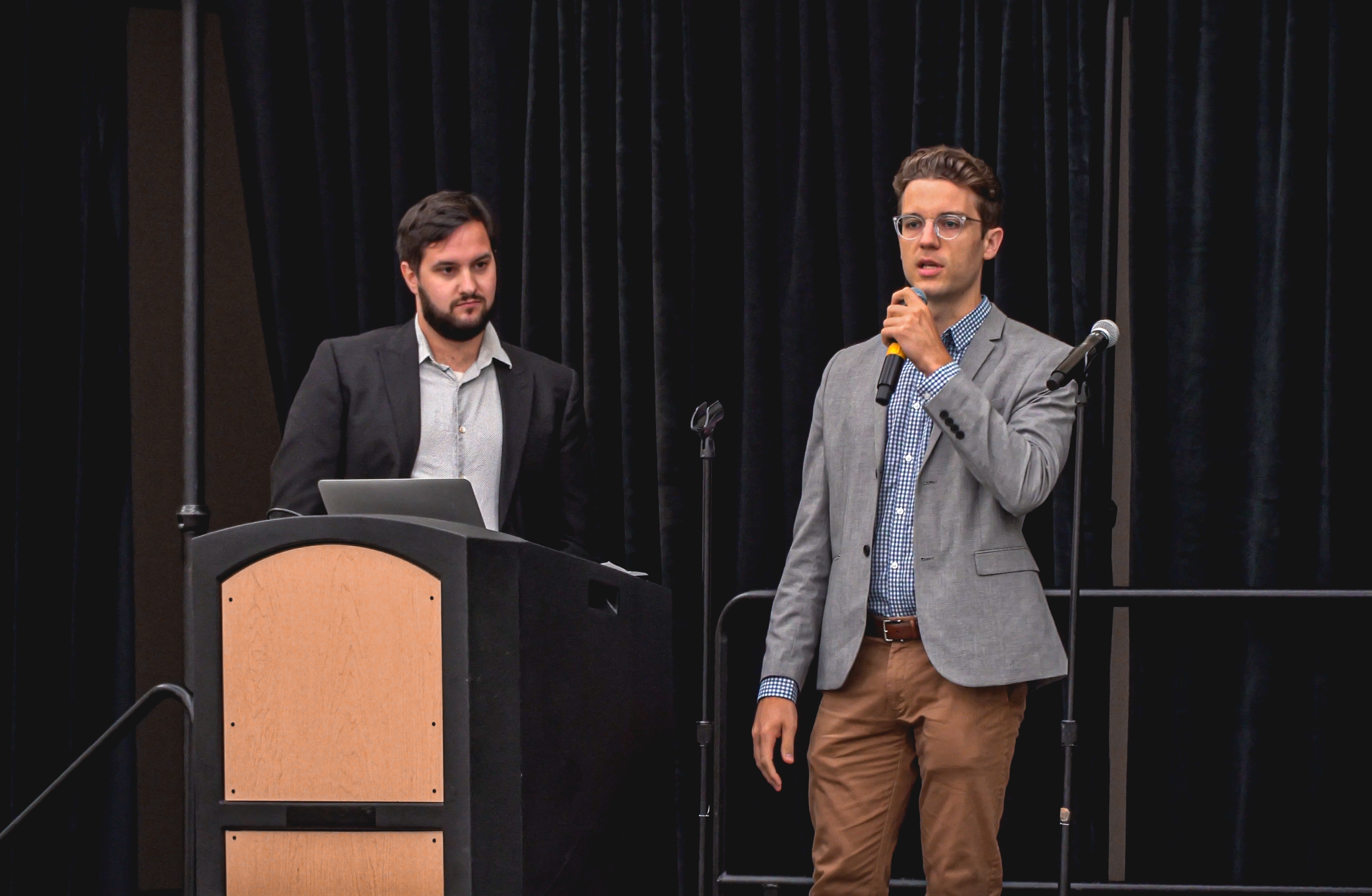 Patrick Dunn speaks about the importance of recognizing the professionalism of the young writers who participated in his essay challenge. 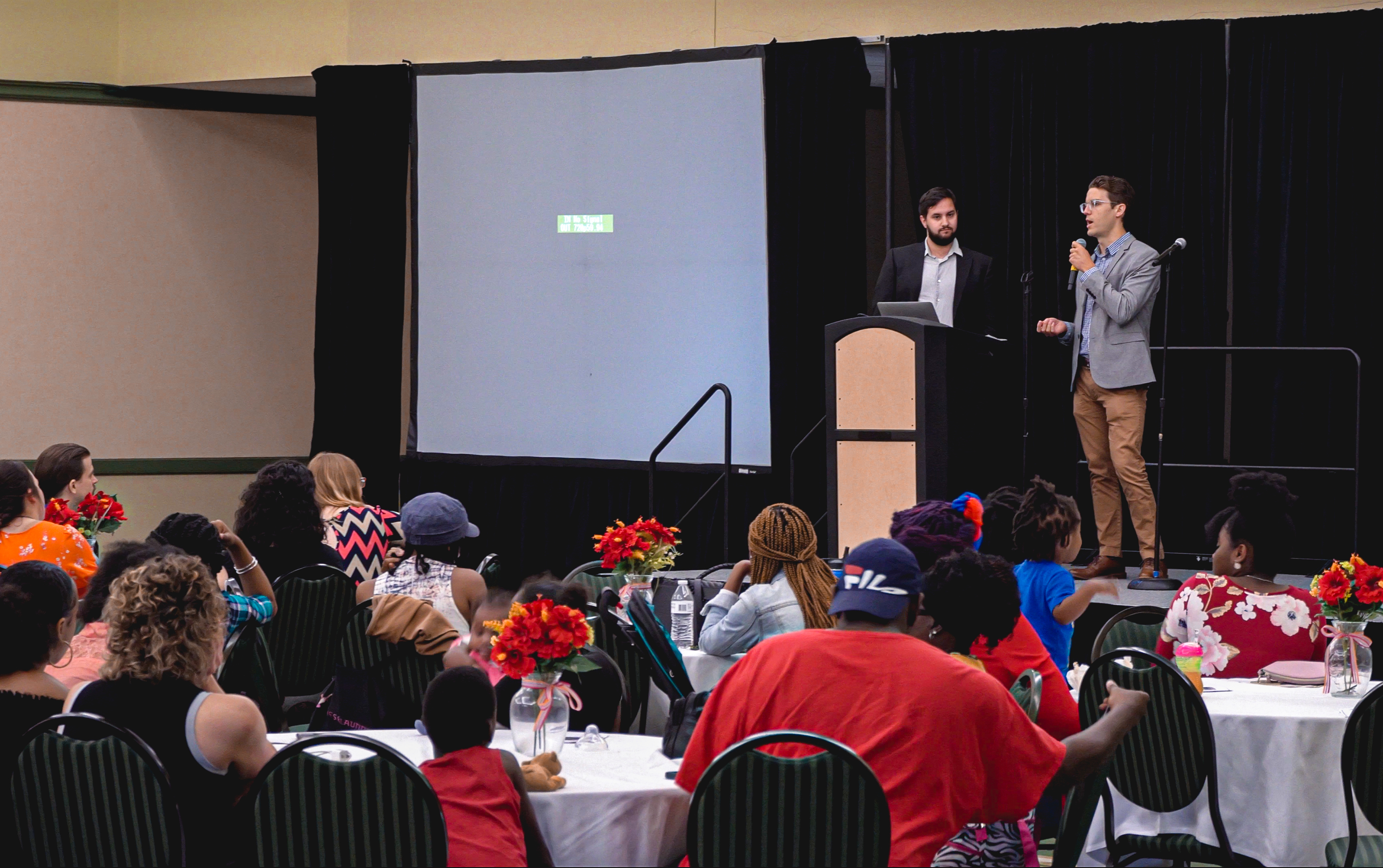 Patrick Dunn speaks about the importance of recognizing the professionalism of the young writers who participated in his essay challenge at an awards ceremony held at Eastern Michigan University, July 25. 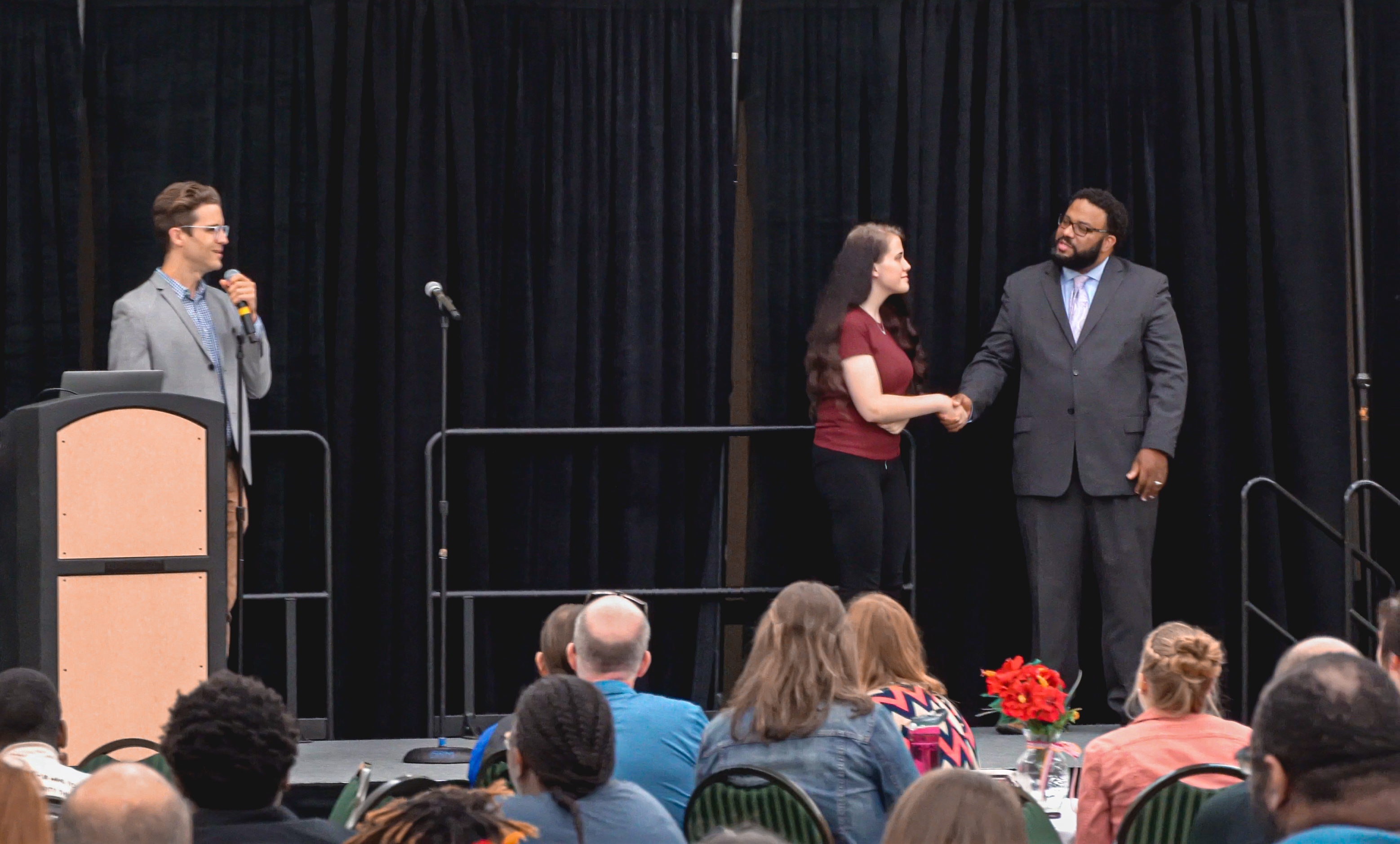 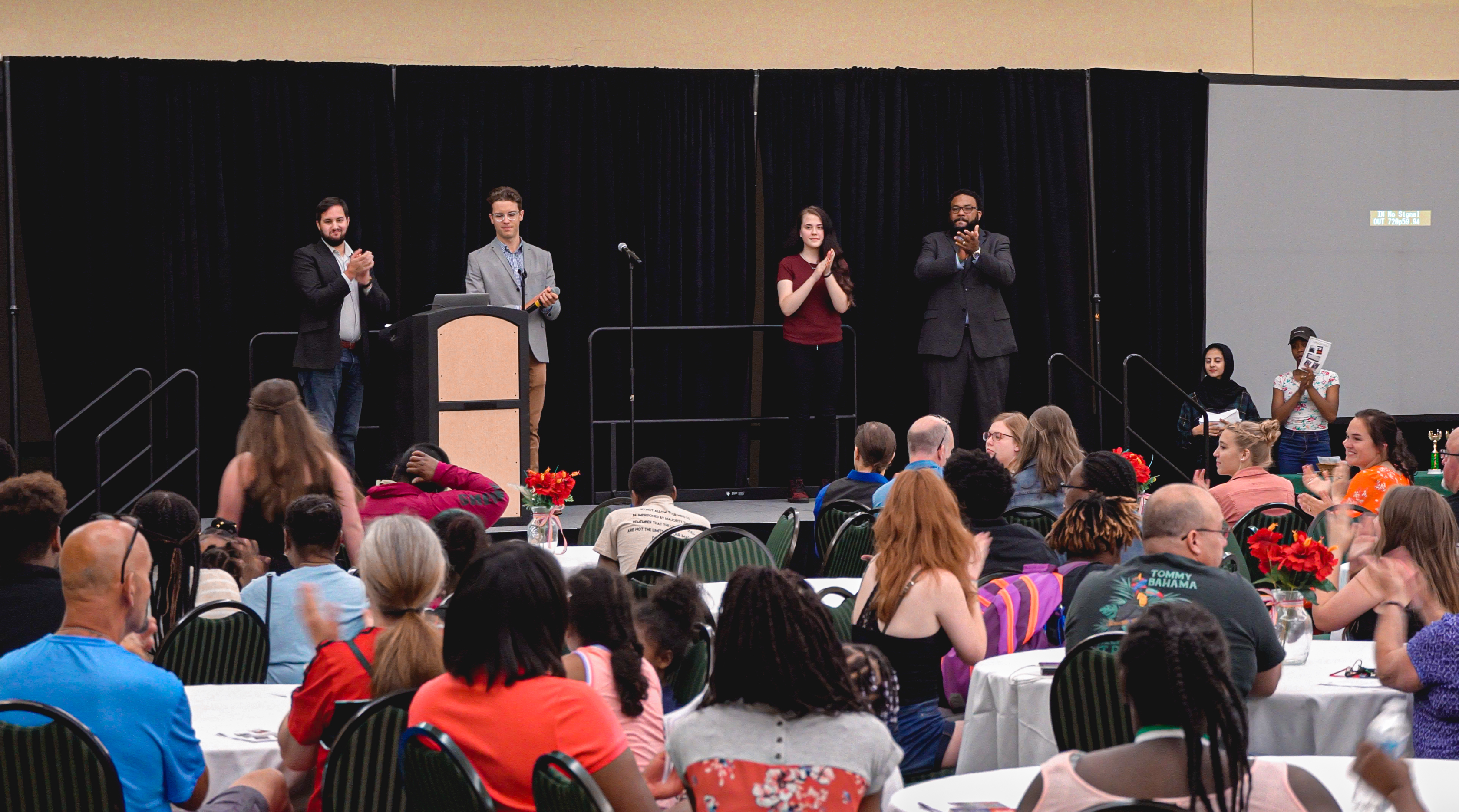 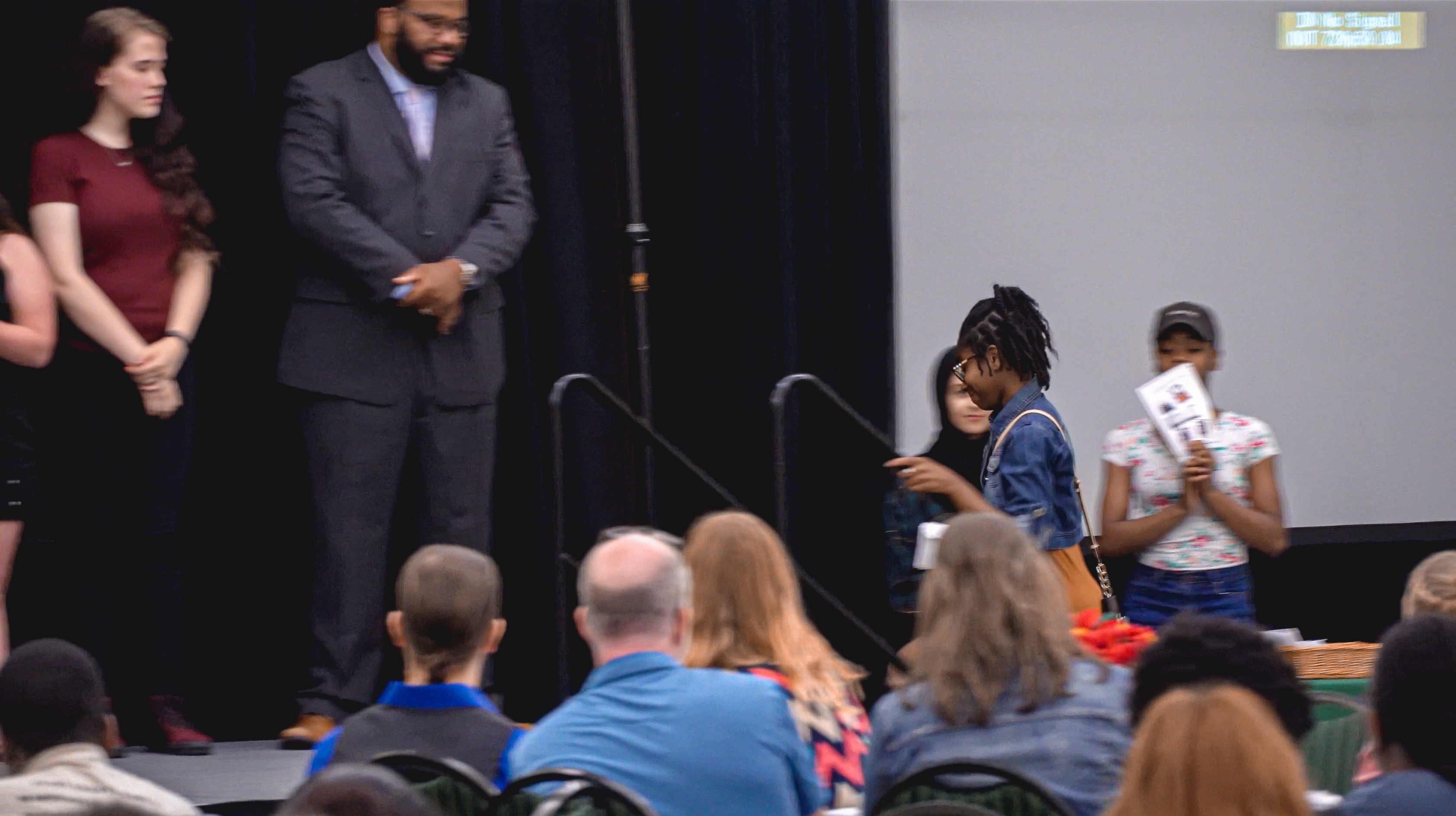 The final of the five winners announced, Marie Garrett, takes the stage. 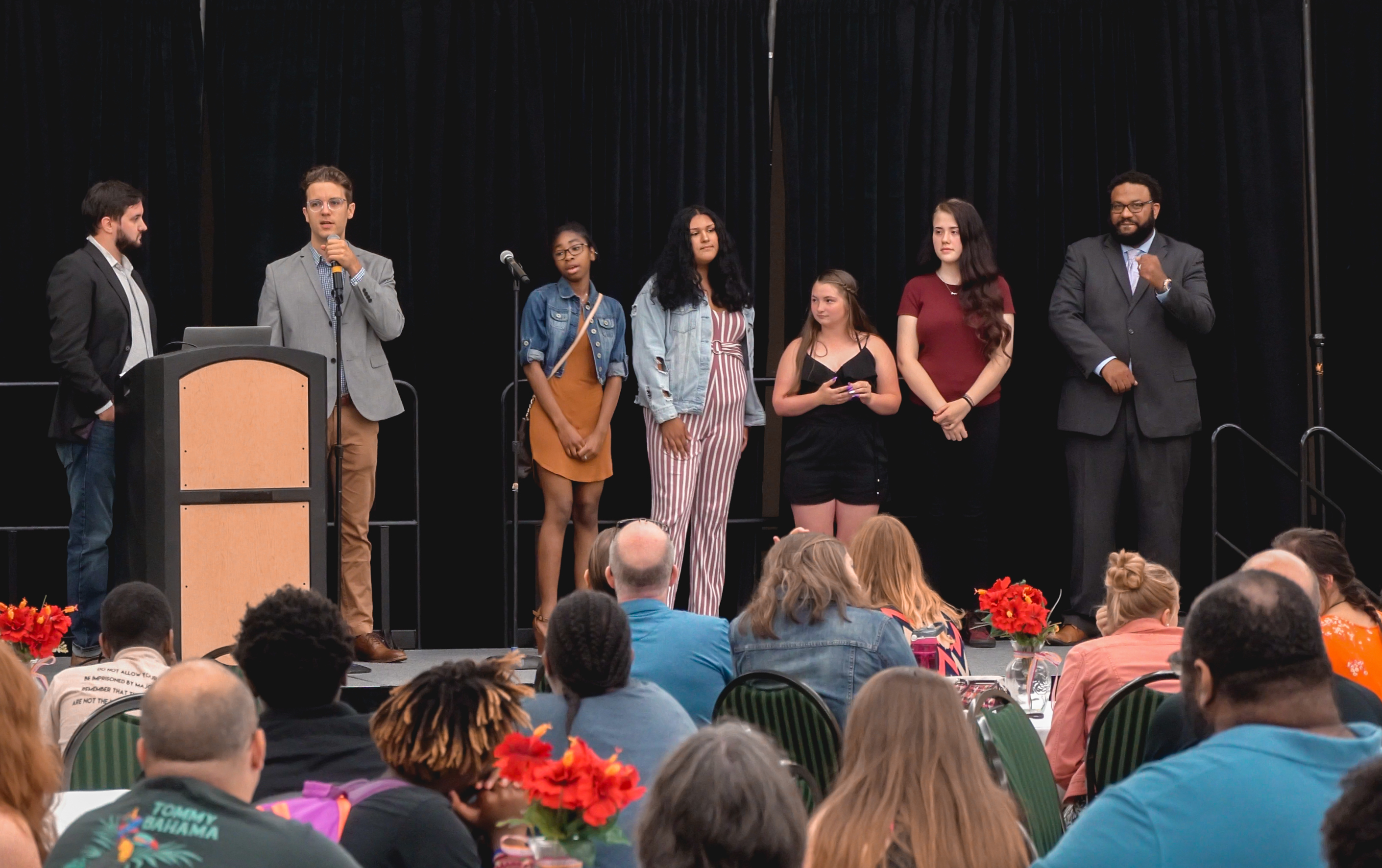 The challenge was born out of a partnership between Upward Bound and Washtenaw County news outlet, Concentrate, as part of its reporting program called “On the Ground Ypsi.”

Dunn’s essay prompt challenged students with answering how they would solve their community’s greatest challenge. Students spent the weeks of July drafting and revising their essays ahead of the Summer Academy Closing Ceremony on July 25, where five winners were announced.

Winners of the challenge will be paid a stipend of $50 for their writing piece, which will be published in Concentrate.

The reward was called stipend instead of a prize to make clear the competition was a professional writing opportunity, Dunn said, and for some of contestants, perhaps the first of many.

“Too often in today’s journalism world, young writers are expected to write for free,” Dunn said. “I wanted to set a precedent that work worth publishing is work worth paying for.”

The Upward Bound program is all about preparing students for the reality of college, Dunn said, and he and Upward Bound’s director, Rod Wallace, wanted to make clear to the students that this competition wasn’t just for fun.

“I believe that although the contest is competitive, its biggest benefit for the students is that it requires all of them to think critically about their environment and their ability to positively affect it,” he said. “They’ll be responsible for mending our errors and solving problems we haven’t even encountered yet someday.”

In addition to helping with the summer program’s writing challenge, On the Ground Ypsi writer Sarah Rigg was visited with Upward Bound kids to talk about her career path and how she navigated her own youth, Wallace said, and “there’s value in those experiences for our kids.”

“I think any time you have to write about something, it makes you have to organize your thoughts in a way that can be really useful and bring new insights,” Rigg said. “I hope this writing contest will challenge young people to think about problems in the community in new ways and come up with innovative ideas to address them.”

Rigg was in the Ypsi community while reporting and making connections, she said, and ran into Wallace, who asked her about writing opportunities for his students.

Concentrate is entrenched in the Ypsi community, Wallace said, and believes the outlet is helping to tell its untold stories.

“The more they believe in being solution-based about Ypsi and not fall into negative thinking about their community, the better,” he said.

The entire focal point of this partnership was on what was good for the kids and what would get them engaged in their neighborhoods, he said.

Rigg told Wallace about On the Ground’s “community contributor” program that offers quick bootcamp-style lesson in journalism for people who aren’t professional writers or journalists but who are passionate about an issue affecting their community, she said.

Beginning in 2013, Concentrate’s Detroit-based parent company, Issue Media Group, conducts On the Ground embedded reporting projects in over a dozen communities nationwide. which seeks to create “solutions-oriented” media coverage , with a focus on community engagement in hopes to encourage investments which contribute to Ypsi’s “vitality and prosperity.”