With a decade-long career on her behalf, this 34-year-old DJ and producer went from mixing for an empty crowd in a local Detroit bar to open Tresor with a 3-hours long set. For Rebecca Goldberg –313 Acid Queen on her last two albums– it’s all about committing, collaborating and creating.

As Rebecca Goldberg drives by the surroundings of Packard Plant trying to find a gap where to trespass, she suddenly slows down the car just beside a group of public workers. Half of the street is fully closed while two lorries and a Volvo bulldozer hold to take the old pavement of the way. The beats come from the ground: thousands of impacts per minute from an industrial drilling machine cracks the concrete for minutes in a row. “This is techno”, she says, and takes her iPhone out to get it recorded. 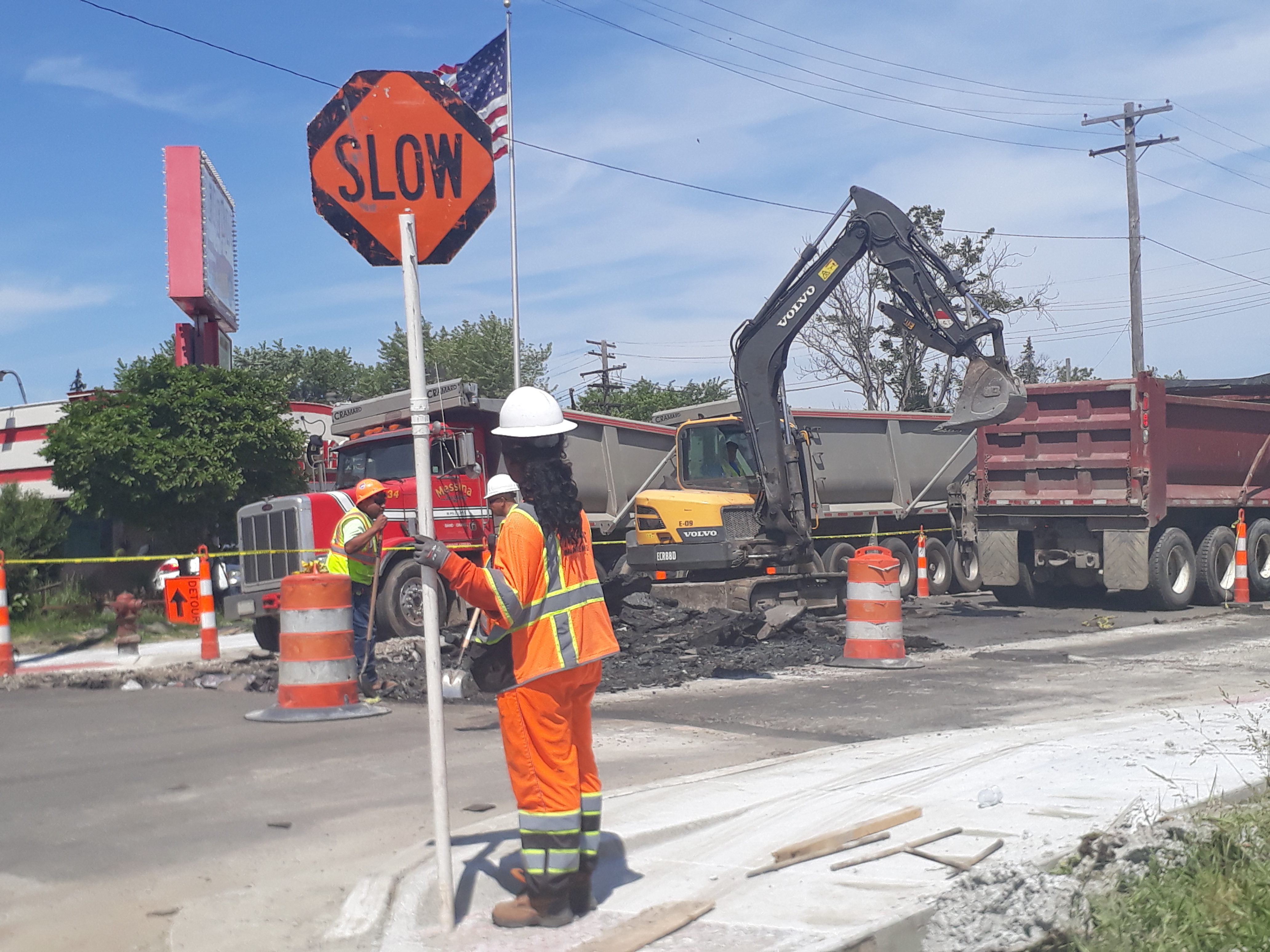 A road being repared just outside Packard Plant

Goldberg is a 34-year-old Detroit-based DJ who’s been active in the techno scene from 10 years now, but began getting interested in music as a little child. Her first taste of music came from what her parents were listening back in the day – Bee Gees, Genesis and Phill Collins, as she recalls – but independent radio stations drove her interest to the next level. There she found a space were programming was not that corporate and a place where to get a glimpse of the Detroit nightlife as some DJ’s broadcasted their gigs live.

“They would play live music and I’m just like: ‘I can´t wait until I can go to this place.’ I don’t know what it is, I don’t know where it is or who is involved, but I wanna hear that all the time,’” she said.

It took almost 10 years for Goldberg to make his move into DJing after a friend introduced another woman who was constantly performing around town. For another year she helped a friend carrying and setting up his gear just to watch and learn about the machines, until she found a bar that agreed to have her play every Thursday night.

“That is the most important part of my entire career. Knowing how to take care of everything by myself and be self-sufficient,” Goldberg said.

CASH4GOLD was her first solo project and then she took 313 Acid Queen as her main alias. In 2017 Detroit Underground published her homonym debut EP and Ω-3 Fatty Acids the next year. She also composed a more experimental soundtrack for Georges Méliès’s “A trip to the moon” in 2016 and is currently composing a track for the original Godzilla sponsorshiped by the Redbull Music Academy.

What Goldberg takes from Detroit, a city that has been pinpointed as the place where techno began under the eaves of Juan Atkins, Derrick May and Kevin Saunderson in the early 80’s, is the blending between raw human activity and nature, between the ruins of a city that was once an industrialized metropolis and the green and the grass that has now taken over.

In the same corner Goldberg will find the most tender bird singing its chest out, a singing cricket and the sound of the wind going through and old industrial fan hanging on a wall that may collapse in any time at the Fisher Body Plant.

These motives can be found in a track like Neighbourhood (Michigan Avenue Acid), the second one on her 313 Acid Queen EP. An intro of nearly 90 seconds of field recordings of birds, footsteps and a barking dog unravels four more minutes of intense acid beats generated mostly by Roland’s 303, 808 and 909 and an MPC drum machine. The birds and the dogs continues to mumble all throughout the track as if they are one with the bass line, the kick and the melodic line. 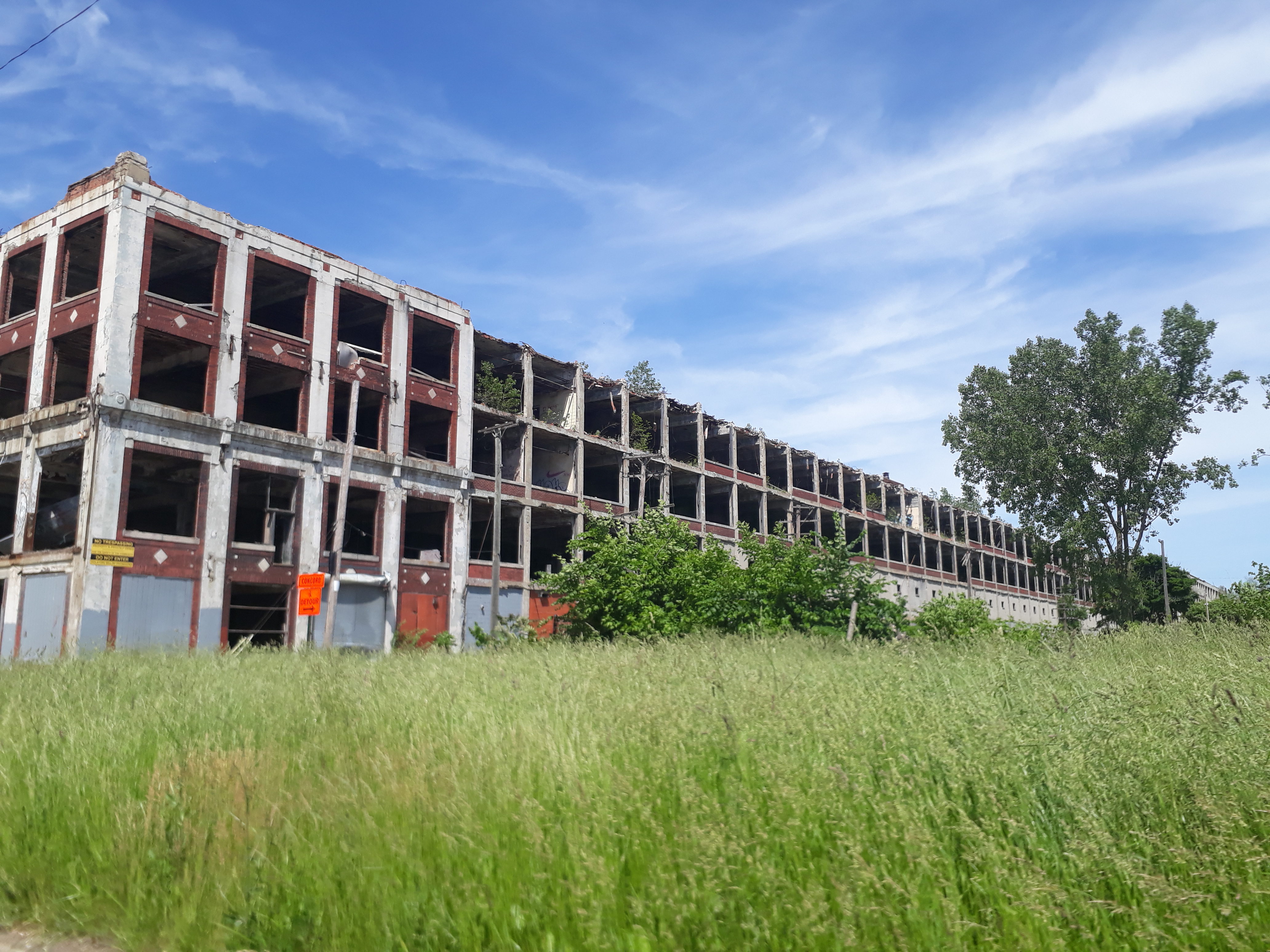 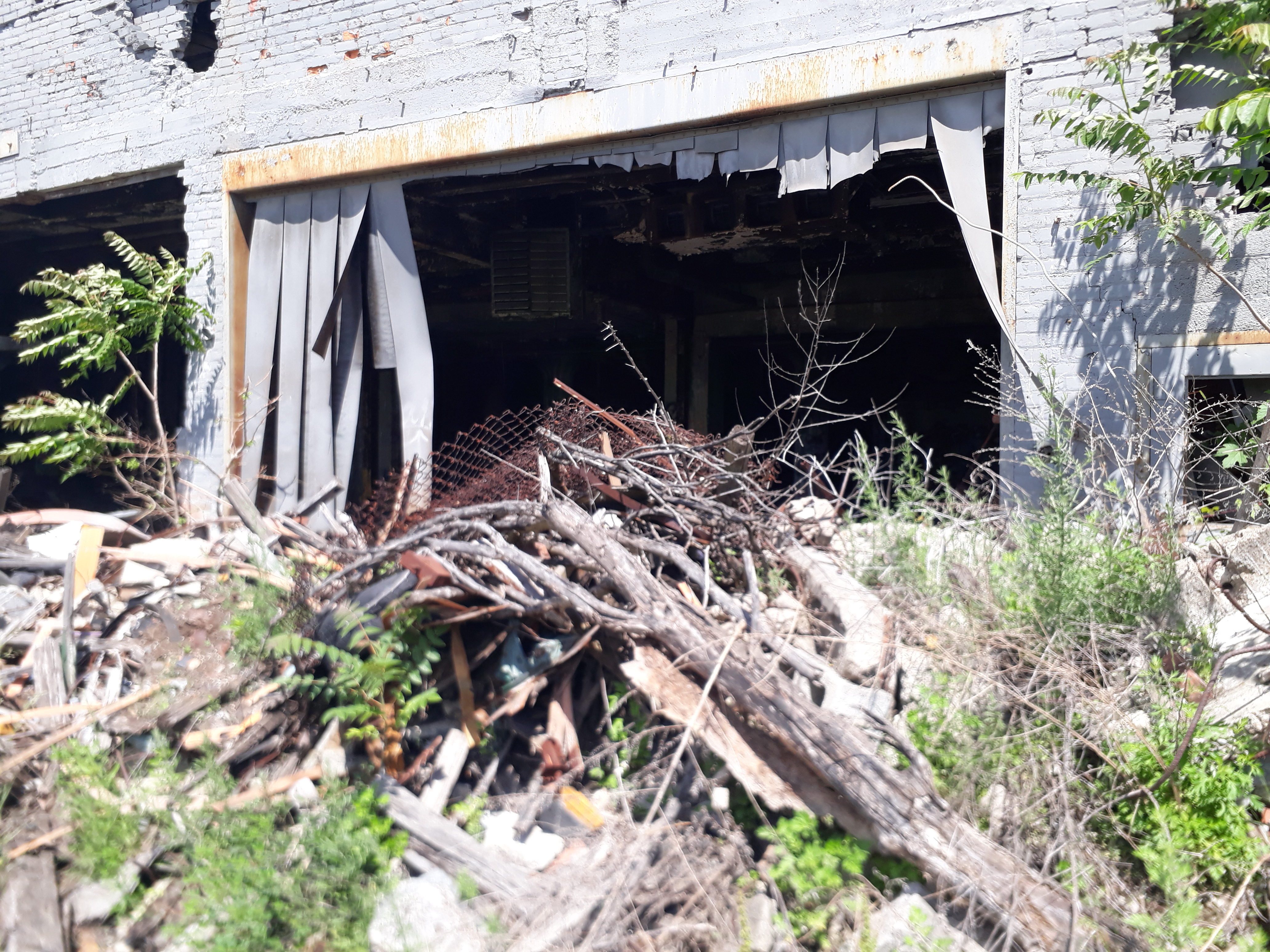 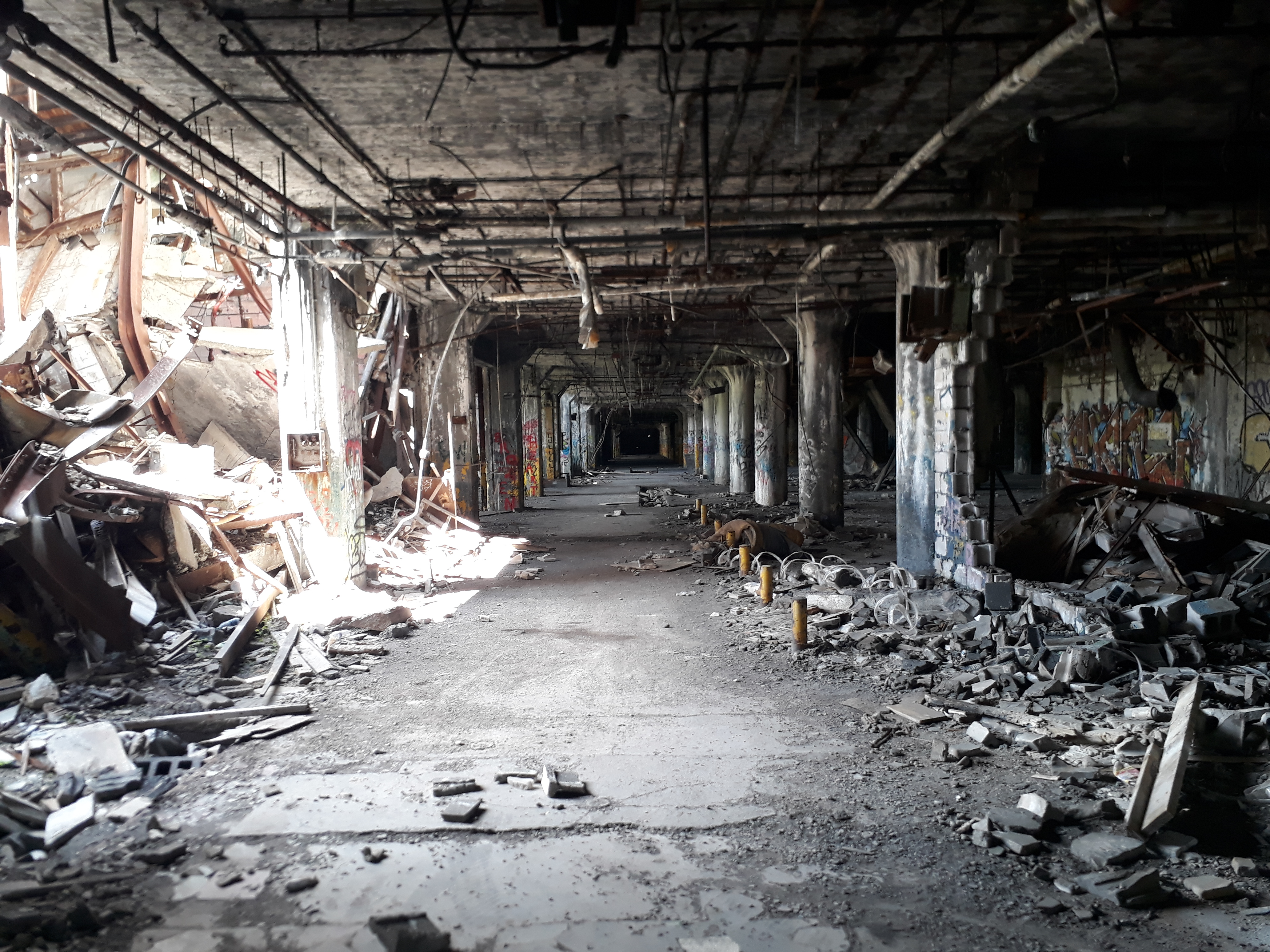 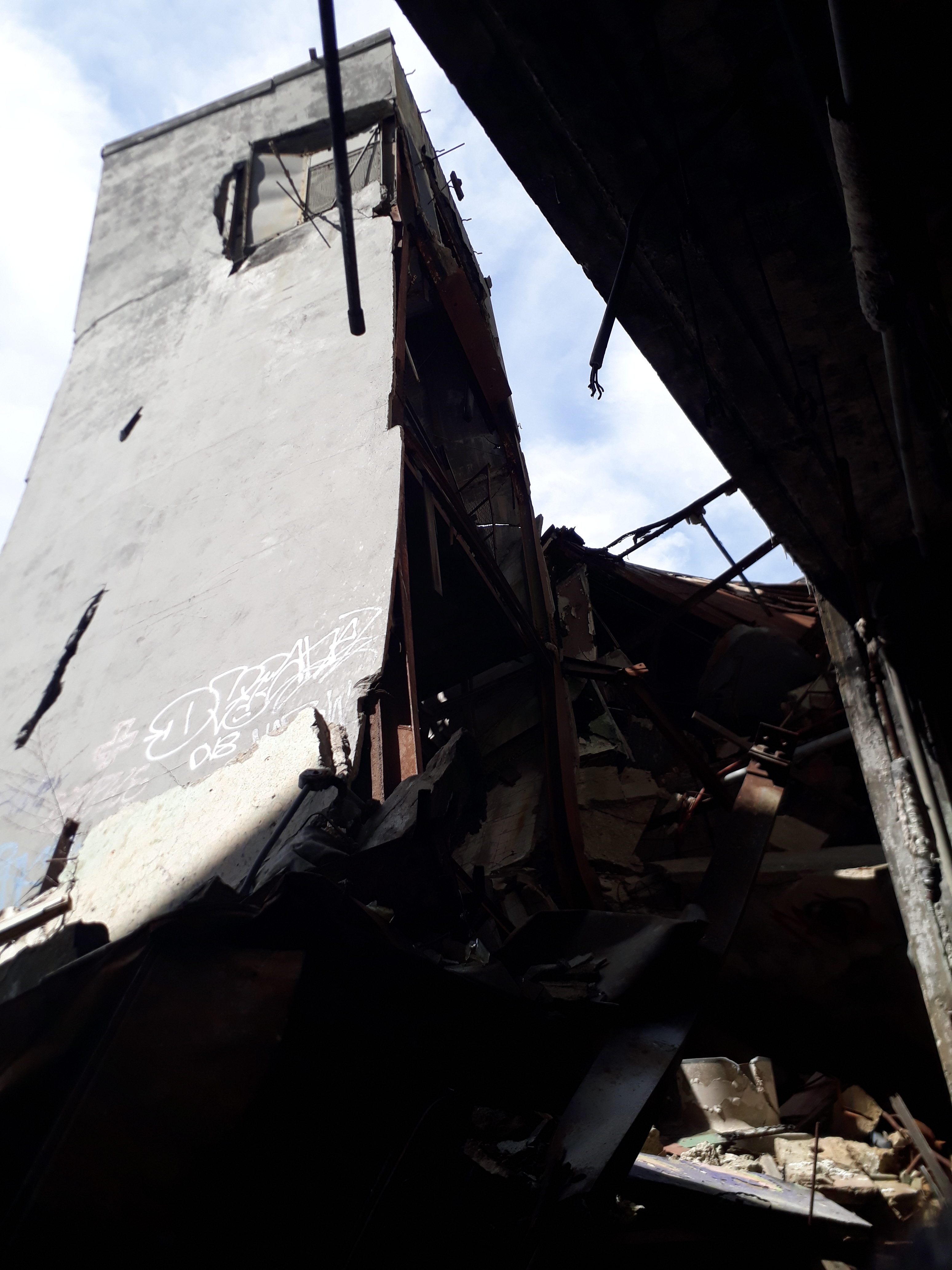 The Heidelberg Project is for Rebecca Goldberg another place where to keep returning. Like the music she thrives for, it never remains the same. And there she can cross ways with Tyree Guyton, the person behind the installations, and his way of conceiving art – always politically committed and ready to stand it’s ground.

“When you are on a battle line you can’t think about it, you gotta know. You gotta know how to fight. Use art as weapon, as a way to change the world and educate government,” Guyton said. “I’ve been doing this for 33 years and guess what: all this people and you are here, so it’s working. So government would be crazy to try to get rid of this, and we won’t let them.”

Health and diet are Goldberg’s main concerns when asked about what she’s engaged and committed with in the last months.

“What goes in is what makes you”, she claims, “and the best influence somebody is to do it yourself instead of force anyone to change.”

Ω-3 Fatty Acids, released this past November, was designed under this premises. It’s a record that explores the concept of good alimentation as her research lead her to the omega-3 molecule as one of the most suitable ways of replacing meet that comes from a perverse industry.

“Once you realize how the system works, it becomes so f— up. If you are sick, then you need to go to a hospital and pay a bunch of money for them to tell you to go get some pills because they are gonna fix you, not eating better,” she said. “Keep eating your s— food and then take some pills. And then the pills are gonna give you side effects, so you need another pill that corrects this other pill. So you are in this cycle and then you are 300 pounds and have diabetes.”

And just like Guyton’s conception of art, Goldberg uses arts and music to confront those rotten points she’s detected in the system. In a way, she said, arts may be the glasses which allows people to see the “real” truth behind the system, as she references John Carpenter’s 1998 film They Live.

As for the local scene of techno in Detroit, in which Goldberg has been immerse on this past ten years, she has found herself on a point where she is refusing most of the gigs she’s been offered because they want her to play a safe and sound set that takes an hour and no more. And she feels the same about some of the DJ’s in the city.

After the Movement Festival of 2018, Goldberg received an email of the booker of Tresor, one of the most important techno club in the world, to set up an opening show in Berlin for the first time.

“Don’t hold back. This is not Detroit. They want to hear hard, fast, authentic techno even if you’re opening at 12 o’clock,” was the advice of Erika, a Detroit-techno veteran, founder of Interdimensional Transmissions, said.

“That was the only gig where I didn’t have to change the program to make the audience happy. What made me happy made them happy for the first time. They loved what I’ve been studying for ten years,” Goldberg said. “If I play like that here, I would get in trouble.”

Once in Hamtramck, Goldberg parks his car a block away from Detroit  Threads, where she works in the record store that has been named as one of the must-go places if you are looking for the Detroit sounds. It’s a job that she now considers her dream job as she gets to know people’s taste on music, share opinions with them about, and meet the musicians that keep showing up.

But she’s off this day and, instead, she’ll join a group of 5 other woman DJ’s of Detroit for the very first ever meet up of Every Woman Music, a fresh-born collective that aims to build connections and facilitate tools for new musicians to get their projects closer to the community.

Some of them have never yet played a live gig, some of them are already members of electronic music organizations such as the Michigan Electronic Music Collective (MEMCO),  some of them have been performing for years now, but all of them are eager to create new spaces. Jenna Smith, the founder of the collective, shares with Goldberg her  opinion on the local music scene: a city where everyone is a musician in some strange form, but clicky.

“It’s like a popularity contest: this people only hang out with these people and that people with only that people. That’s the biggest hindrance of the Detroit music scene,” Smith said. “It feels like no one is willing to get out of their comfort zone and work with each other for a greater good and promote the Detroit music as a whole.”

Goldberg is the most experienced of them all, and doesn’t hesitate in sharing her insights and experience as an artist that has been making her own path for the past ten years. She’s tired of doing things by herself, she said, and has been waiting for this kind of network to re-engage with Detroit.

As the conversation goes, they discuss the position of womxn in the music business, the software they use and the gear they’ve worked with. One advice Goldberg gives is to use everything available on their hands to get music done  and not to worry about the quality of it, because everything out there can be transformed into music, as she brings John Cage, one of her beloved artists, to the table.

Later they’ll come up with plans for techno-only afterparties, monthly sessions of practice and a ladies-shopping night every Tuesday at Detroit Threads, as they crave for a place where they don’t feel themselves bounded to an old-established scene. First ever Every Women Music meeting