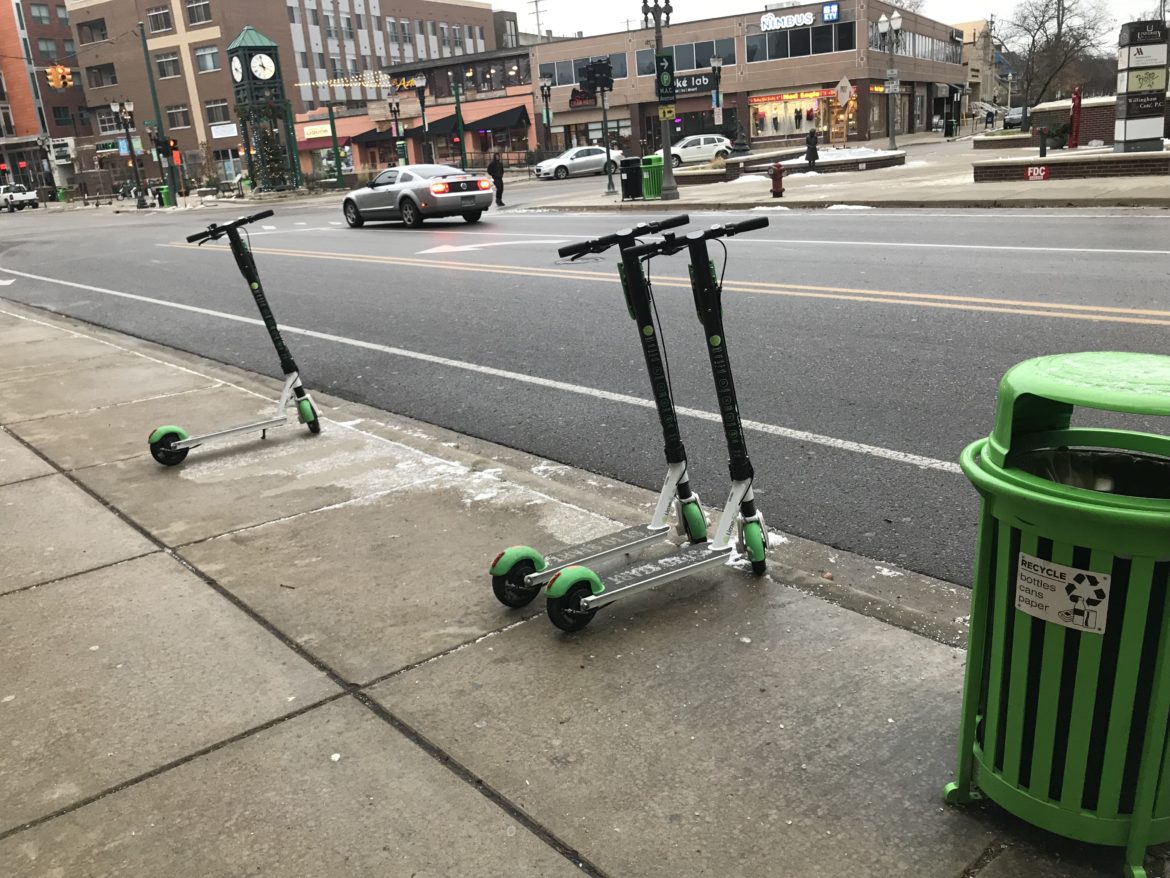 In the fall of 2018, Bird and Lime scooters mysteriously appeared on Michigan State University’s campus and in East Lansing.

“I think they were dropped by UFO and one morning they were just there,” East Lansing Mayor Mark Meadows said. “I don’t remember the exact date but in the fall they dropped them off in the city and on campus.”

Where did they come from?

Bird Scooters were dropped off by Bird Rides Inc., which is an electric-scooter sharing service which allows residents with an alternative mode of transportation. To use the scooters, riders first have to sign up using the Bird app through their smartphones. Once the app is downloaded, users can unlock the scooter with the app and rent them by the minute. Bird scooters start at $1 to use and then it’s 15 cents per minute.

In order to use the scooters, you must be at least 18 years old, have a credit card and have a valid driver’s license.

Birds are usually out between the ours of 5 a.m. and 8 p.m. During the night hours, the companies hire individuals who go out and pick these scooters up and recharge them. Chargers can make anywhere from $5 to $20 for each scooter that they charge, after charging the scooter they return them to the streets.

Bird Rides was launched in Santa Monica, California. Soon after launching, the company placed their scooters across the country.

According to the Lansing State Journal, Detroit was the first city in Michigan to receive the scooters, showing up around July.

Lime Scooters seemed to just appear much like the Bird Scooters, shortly after their arrival. According to data received through MSU’s Freedom of Information Act Office, bicycle permits are almost neck and neck with parking permits on campus, with mopeds in last place. The scooters coming to East Lansing and MSU’s campus creates another form of transportation for college students that may really need it.

“It’s a lot easier to get on a scooter to get to class than it is to walk to class,” Meadows said.

Response to the Scooters

There have been many mixed responses and concerns regarding the scooters coming from residents of East Lansing as well as East Lansing city officials.

Although the scooters have been taking over East Lansing, many have been impounded due to being in violation of parking regulations.

Many residents are concerned with the idea of the scooters due to the lack of safety regulations.

“Most of the emails we’ve received have come from older residents and they are very much intimidated by the fact that these things are zooming by,” Meadows said.

According to Meadows, many residents send it suggestions regarding how the city should regulate the scooters and make them safer for everyone.

East Lansing resident Nancy Thompson called the scooters a “great concept. I just think there is a misunderstanding of how they should and are supposed to be used.”

The electric scooters cannot be ridden in the bike lane or on the sidewalk. Scooters should also be parked appropriately when riders are finished, but that doesn’t always happen.

As stated, both scooter companies came into the city pretty quietly.

Companies are also required to negotiate a franchise fee when operating on city owned property. Generally in East Lansing, 5 percent of their total sales would have been transmitted to the city  in order to use the public infrastructure.

“I think there are two different business models here. One of the companies here and I can’t remember which one, has been very cooperative with us. The other one has been a little hard to get a hold of,” Meadows said.

According to Meadows, one company has the business model which allows them to cooperate as broadly as it can. The other business model is to stay quiet and not interact with the government.

The city of East Lansing and the scooter companies are currently working to make an agreement in order for both companies to continue operating in East Lansing, Meadows said.

What’s next for the scooters? According to Mayor Meadows, in the upcoming winter months and breaks from school, both companies will be removed from the city since neither company has a license to operate in the city.

For the winter months, the city of East Lansing will be removing the scooters from the streets as they negotiate with the two companies regarding the franchise fees, licenses and deals, Meadows said.

Both businesses will be allowed to return and continue business in East Lansing once business agreements have been reached, he said. If there is no agreement reached, unfortunately the two companies will not be able to return.

There has been no word on whether or not the scooters will be removed to Michigan State University’s campus as well.

Both companies were contacted for commented but failed to get back to us.

Chelsea Henry is currently a senior journalism major with a concentration in electronic news. Chelsea is apart of National Association of Black Journalists as well as a former reporting intern for HOMTV in Meridian Township. Chelsea wants to one day become an entertainment correspondent and someday have her very own talk show.