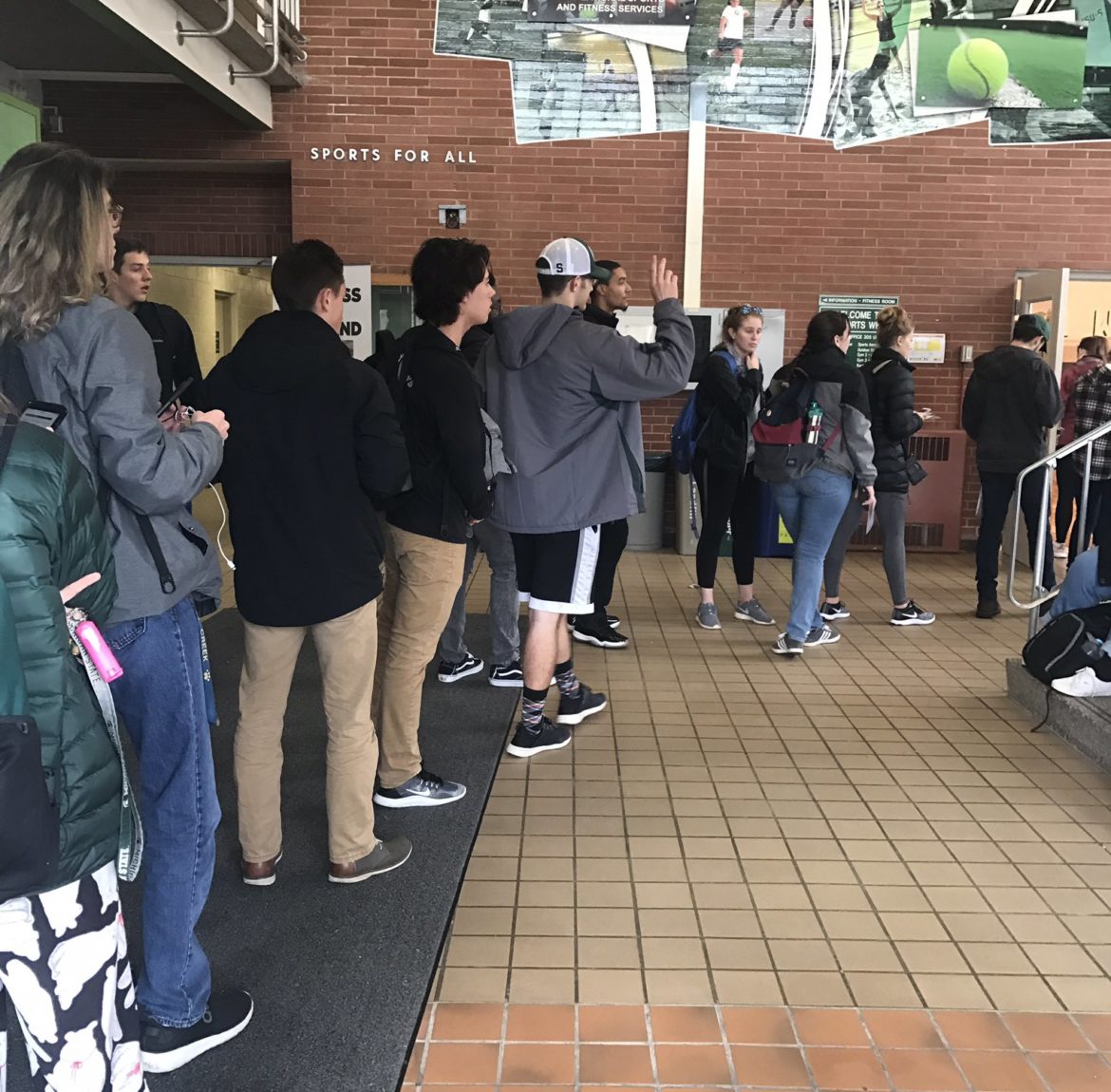 line out the door at IM west. Students waiting to vote.

The line at 11 a.m was out the door at IM West on Tuesday morning as students waited to cast their vote. Many talked about who they were going to vote for while they waited.

For some students, this is the first time they have come out to vote. Pauleana Stevanovski, a sophomore at MSU, said this was her first time voting.

“I decided to come out and vote because there are a lot of topics being voted on,” Stevanovski said. “In the past I haven’t found anything that important to me, but this year there’s multiple topics I am passionate about.

“Legalizing marijuana is important because it could bring in a lot of money for the state and it helps with illnesses, therefore I see no reason why it shouldn’t be legalized.”

Stevanovski said certain measures need to be taken to make sure marijuana isn’t abused, if it becomes legalized.

“I don’t think people should be sitting in jail for 10 years for having marijuana on them while people who have murdered people can get out of jail earlier,” she said.

Melissa Linden, a senior at MSU, said she couldn’t wait to submit her ballot. She felt this election was one of the most important elections in which she’s voted.

“Legalizing marijuana would be huge for the country,” she said. “It has been proven it provides numerous benefits. Marijuana would help the illness my mom has been battling for years now.”

“The local races never get as many votes, and I think there’s important topics being voted on,” she said. East Lansing resident Karen Honey said this may be the most important elections in her lifetime because there are so many important topics being voted on.

East Lansing resident Karen Honey said this may be the most important elections in her lifetime because there are so many important topics being voted on.

Honey, who was handing out flyers about candidates to voters outside IM West, said she has been voting since she was 18 years old. Honey said she hasn’t missed any elections because electing the best representative is important to her.

“The Proposal 2 regarding gerrymandering is huge to me,” she said, referring to the ballot proposal to create an independent commission to draw elected officials’ districts. “I don’t think what’s going on regarding that is fair. The governor is another important race to me because it has so much power within the state.”

Honey said she has an 18-year-old son who is voting for the first time today. She said she wants her son to know his vote is significant.

“It’s really hard to have your vote count when your vote counts for a district near Detroit and you live in East Lansing,” Honey said. “I also hope as many students come out and vote today. The turnout rate for college kids is always extremely low and I hope that changes.”

Catherine McEvoy is a Journalism major focusing on sports broadcasting. Sports she enjoys following are golf and basketball. Golf has been in her life since she was young and currently she plays on the Michigan State Women's golf team. She hopes to become a reporter for the Golf Channel one day.