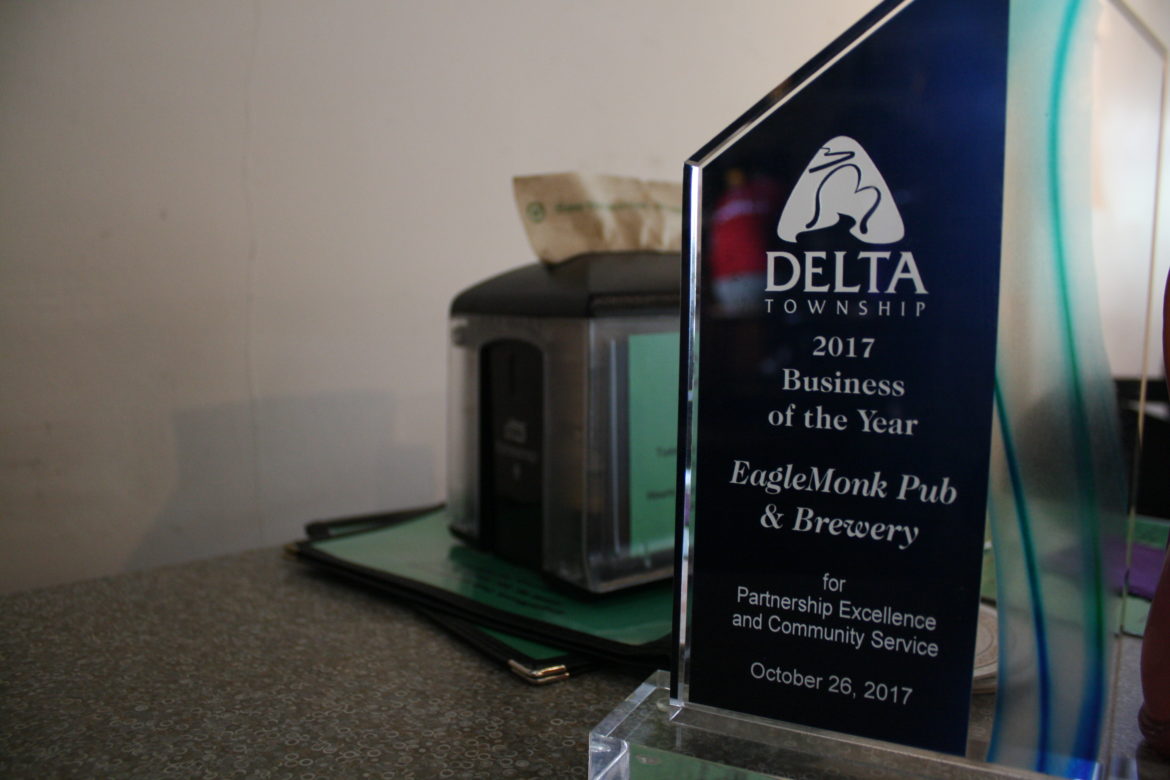 EagleMonk Pub and Brewery was honored in 2017 by the Delta Township Community Awards Committee. Winners of 2018 awards will be recognized on Thursday.

“It helped spur pride in Delta Township,” he said.

Fletcher began his time as township supervisor in 2008, and is serving his third term.

“I enjoy recognizing the great work being done in the community,” Fletcher said. “It’s great to get together to celebrate everything about Delta Township.”

The awards have been held every year since they started in 2006.

Mary Clark started on the citizens committee that helped create the event. She was appointed township clerk in 2011 and elected to the position in 2012.

“It’s a nice social event,” Clark said. “I think people enjoy the awards. We always get new people who come and say how they’ve never heard of it.”

One award given out at the event is the Young Person of the Year Award. In 2017, 10 high school seniors in Delta Township were nominated.

“It’s always encouraging to see all the students,” Clark said.

The winner receives a scholarship to help further their education. Charlie Mora was honored in 2017 as a senior at Lansing Catholic High School. Mora was a member of the varsity tennis team, volunteered as the school mascot during sporting events and volunteered with Habitat for Humanity.

“It’s nice to see so many young people involved in so many extracurricular activities,” Clark said. “It’s not all about the GPA.”

Another award that is presented is the Business of the Year Award. This award honors businesses, or business people, who support the community, work with other businesses and act as role models.

They have a mug club where customers choose a mug created by local potters. Those mugs hang from the ceiling of the pub where club members can grab their mug and use it.

“We wanted to involve the community to give local artists and musicians a place to show off their work,” Sonia Buonodono said. The mug club at EagleMonk Pub and Brewery allows members to have their own mug that hangs from the ceiling of the pub. Mugs are produced by local potters.

That is not all the business does.

“We donate items to other community fundraisers and local silent auctions,” Buonodono said.

One of these fundraisers is the Walk to Fight Suicide, which is held at Hawk Island County Park in Lansing.

EagleMonk Pub and Brewery is also involved in an organization called The Giving Tap. One dollar from each pour is donated to a charity of the pub’s choice. The charity changes every month.

Tickets can be purchased online, here.

“My favorite part of the awards is recognizing the everyday citizen, rewarding somebody who nobody knows,”  Clark said.