Williamston has all the markings of an American small town: historic buildings comprising its downtown section, local family owned restaurants, a bridal shop, a glass blowing studio and the local hardware store.

Nestled above the affairs of the main Williamston strip on Grand River is a somewhat unknown plaza that even local Williamston residents may pass by: Keller’s Plaza, home to “Williamston’s hidden gem” as nearly all of the Plaza’s shop owners called their little hideaway. Matt Mulford runs Peculiar Perspectives, a studio and art gallery at the top of the landing on the second floor of the plaza, along with Tony Steele.

Mulford and Steele’s friendship and passion for art goes back years Mulford says. Sharing a passion for art, the two friends came to Williamston to a store located below the second floor of Keller’s Plaza.

“They directed us up here, just to let us know that there was a space, a studio space,” Mulford said. “Cause we told them that we were out on an art day doing our drawings, that kind of thing. And I never really even thought about having a space together ever, until they mentioned these spots.”

The plaza was once a very popular spot for artists, Mulford said. When Mulford and Steele decided on taking the space in August 2014, the plaza’s traffic had begun settling down Mulford said.

“There were a lot of empty spots up here” Mulford said. “We kinda jumped on this one. It was within a couple of days that we decided we wanted to do it.”

The space Peculiar Perspectives occupies is a small but intimate space. Art lines nearly every inch of wall space inside and tables of are art displayed outside of the shop’s window in the plaza’s hallway. Mulford and Steele have their respective table at the rear of the shop space where they work on their own art.

All of the shops have their own items displayed within easy view upon climbing the stairs to the second floor, enticing perspective shoppers to come in and talk or buy something, exploring what the plaza has to offer.

Keller’s Plaza has grown in the four years Peculiar Perspectives has been there, Mulford said. A small community has formed within the heart of downtown Williamston.

The plaza’s shop owners will pop in on one another to say high and catch up. Mulford said that they all help to cross promote each other’s stores to help get people interested in visiting the other shops upstairs.

Mulford describes his gallery as a passion project more than strictly a business. Mulford said he’s done art for years and likes having an affordable venue in which to continue his art and be able to showcase it for others in Williamston. Angel Morse of Mud Country Candles said she operated her homemade candle business out of her home before moving to the plaza.

Newly crafted woodwork lined the walls and all-natural candles, that Morse prides herself and her husband for keeping local and “non-corporate” Morse says, stock the store’s shelves.

“We hand pour all of our candles.” Morse said.

She didn’t want something corporate and impersonal but something with a unique touch of her own, and her candle business fits right in with the quaint feeling, as Mulford described it, of downtown Williamston and Keller’s Plaza.

Williamston residents pride themselves on having a tight-nit sense of community and this extends within this small community in Keller’s Plaza.

Dave Jones, Keller’s Plaza’s actor, playwright and artist, as Mulford describes him, came into Morse’s store to chat and help Morse out with a tip he got from the kids attending the dance studio downstairs.

The kids were asking if Jones knew if the candle shop had any business cards that they could bring back to their parents and Jones suggested she put some in a tray on her window in the hall. Everyone upstairs looks out for one another like this.

Mulford, an active member of the art scene in the greater Lansing area, attends events and art fairs hosted around Lansing to get the word out about Peculiar Perspectives and Keller’s Plaza. Mulford is participating as a vendor this year in a popular local art show that attracts artists from all across the greater Lansing area: The Dark Arts of Michigan show.

Tiesha King runs The Dark Arts of Michigan show hosted at the Avenue Café in Lansing. It’s an art and music show that features dark or Halloween and horror styled art among other crafts from local artist.

King plays a large role in the Lansing area art scene by facilitating The Dark Arts of Michigan show. King says she’s had people come “all the way from Chicago” to come out to the annual Dark Arts Show in October.

King explained that the event is a great stepping stone for new and old artists alike to get their art out in the world for people to see.

“We had just this backstock of art, and I’m like ‘we’ve gotta do something with this its so cool’” King said. “I said well ‘Hey Colleen (Kelly), the owner of the Avenue, can we add artwork on the walls? ‘Cause we kinda want to have it themed for our event’, and then boom, we had an art show.”

In the five years since it began, the show has become very popular in the underground art scene of the greater Lansing area as word of mouth spread telling people about a new and highly attended art show in Lansing.

“I think my part in all of this is finding those people that are you know, good souls, that have dark art, that can work well within a community of like-minded people, and then we all lift each other up.”

King and Mulford both expressed the need to cross promote everyone else work. Be it a larger show of the kind that King puts on or in the day to day operations of Mulford’s shop.

The role of facilitating the importance of the arts in their local community and why people keep encouraging others to become engaged with art with these local business owners can be illustrated through how Jones got his start in Keller’s Plaza.

Jones said he was working with some really cheap art supplies and one day he receives a box of new art supplies from someone he knows that liked his work.

“This is a gift, and you must pay it forward” Jones said about the one condition he had by getting the box of supplies.

So, he helps pay it forward by letting people use the supplies and space he has upstairs in Keller’s Plaza to engage in their own discovery of the arts.

“I mean, with the Peculiar (Perspectives) art gallery, it’s just really cool that a lot of underground art is getting exposed” King said. 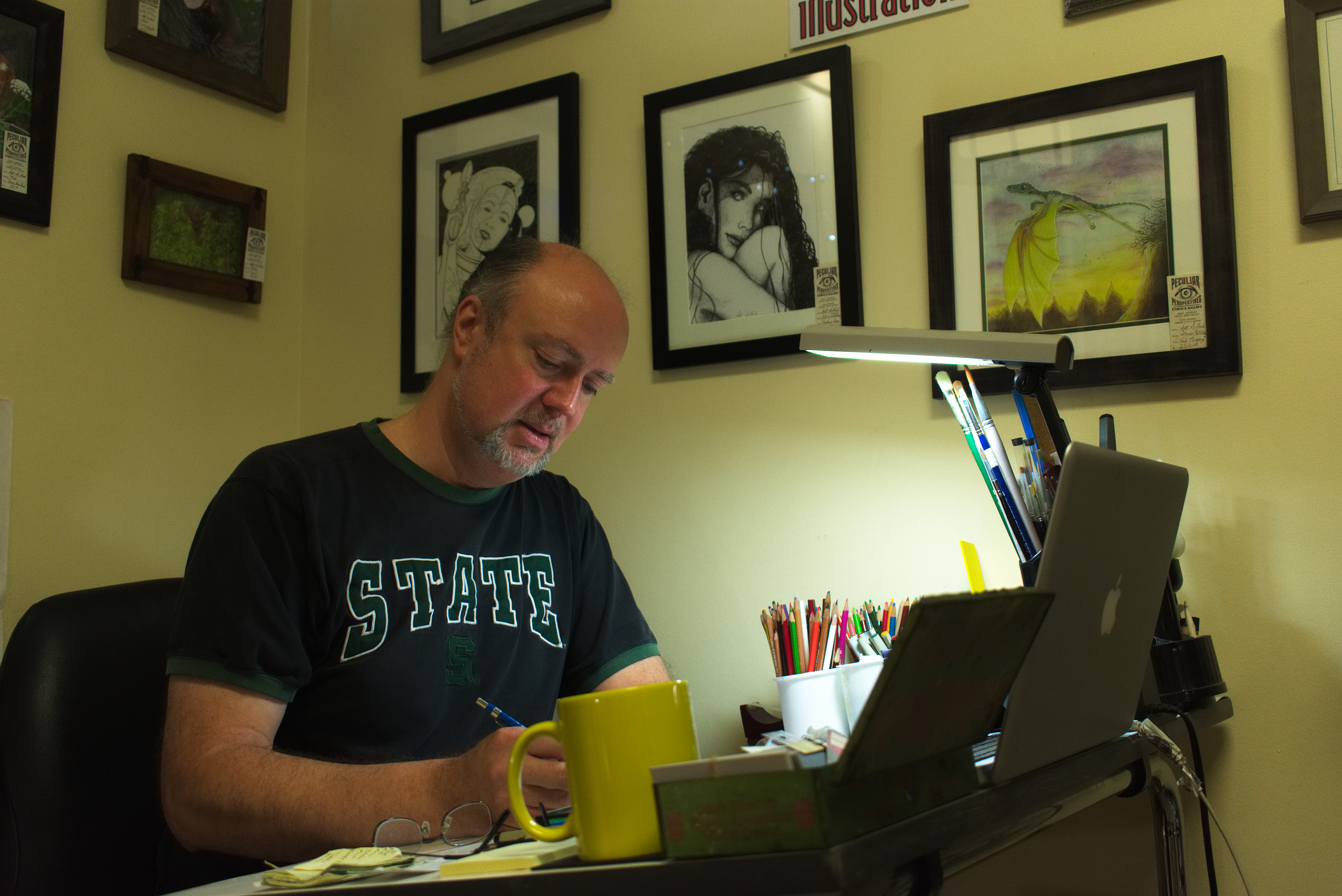 Matt Mulford drawing at his desk inside the studio space of Peculiar Perspectives Studio & Gallery in Keller's Plaza; Gallery. Photo by Nick Forgrave. 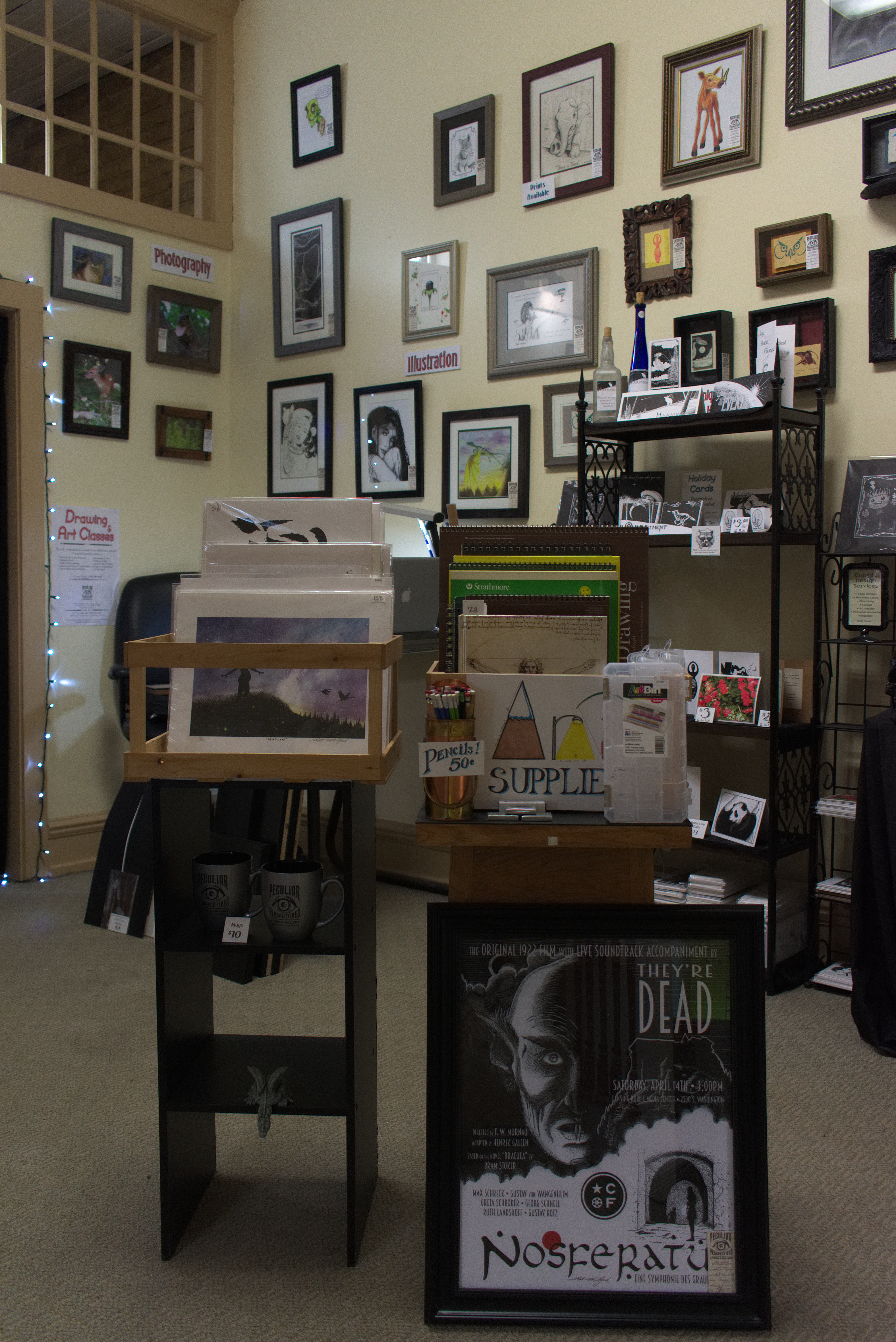 Peculiar Perspectives in Keller Plaza sells art supplies in the center of the store for patrons to buy. Photo by Nick Forgrave 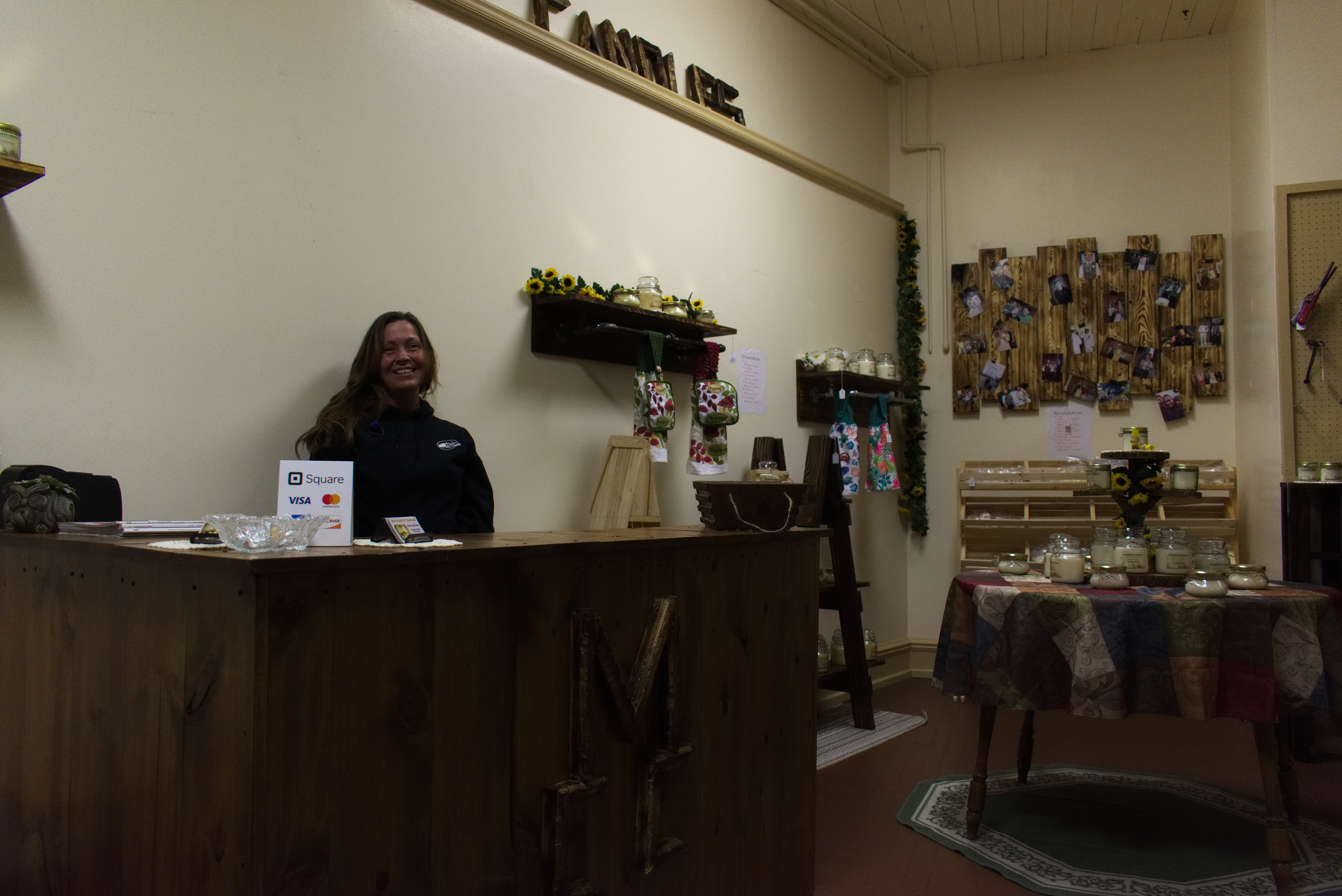 Angel Morse sitting behind the counter of her candle store Mud Country Candles in Keller's Plaza. Photo by Nick Forgrave 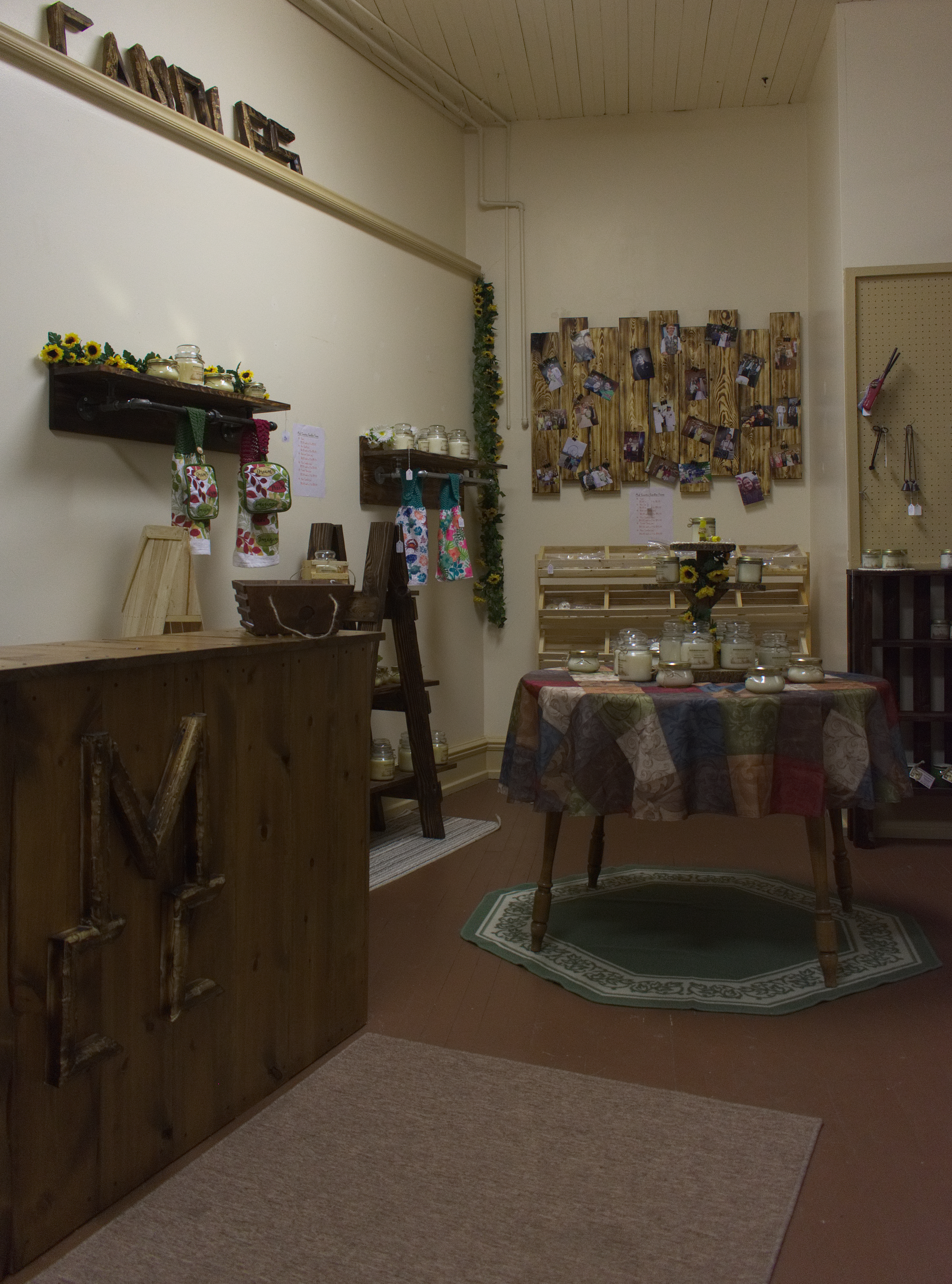 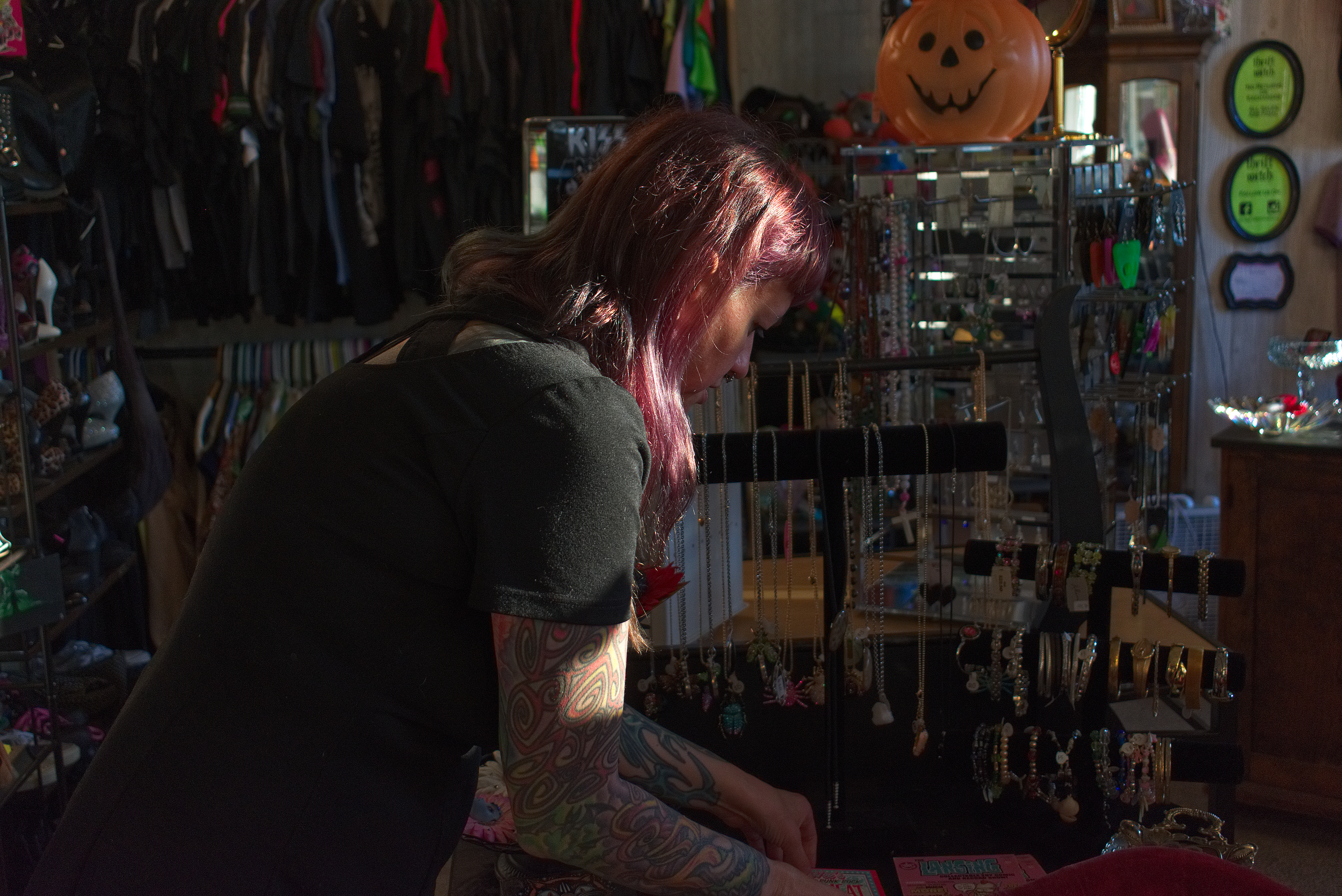 Tiesha King organizing a table of posters inside of Thrift Witch in REO Town Marketplace. Photo by Nick Forgrave. 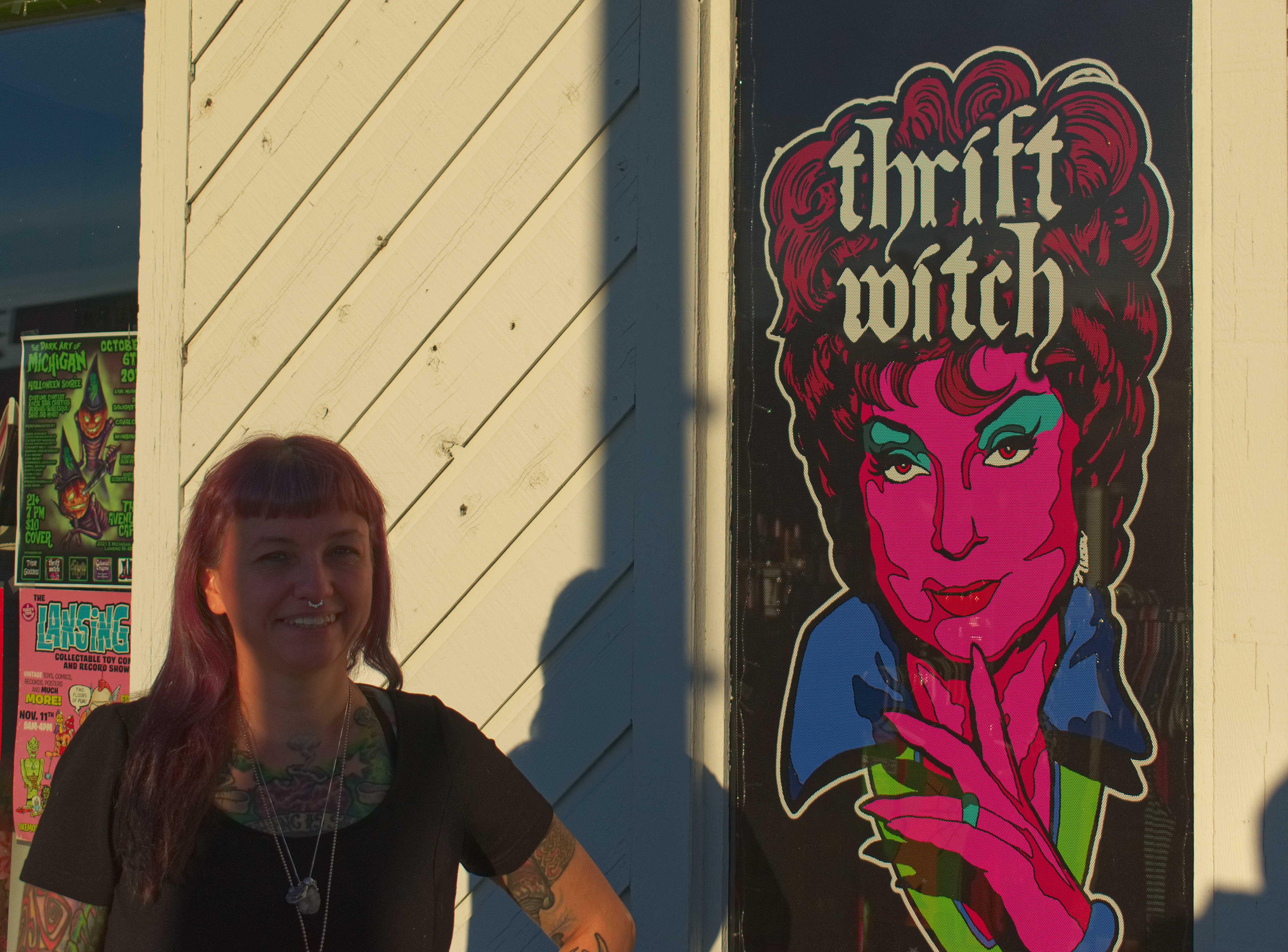 Tiesha King next to the window sign for Thrift Witch in REO Town Marketplace. Photo by Nick Forgrave