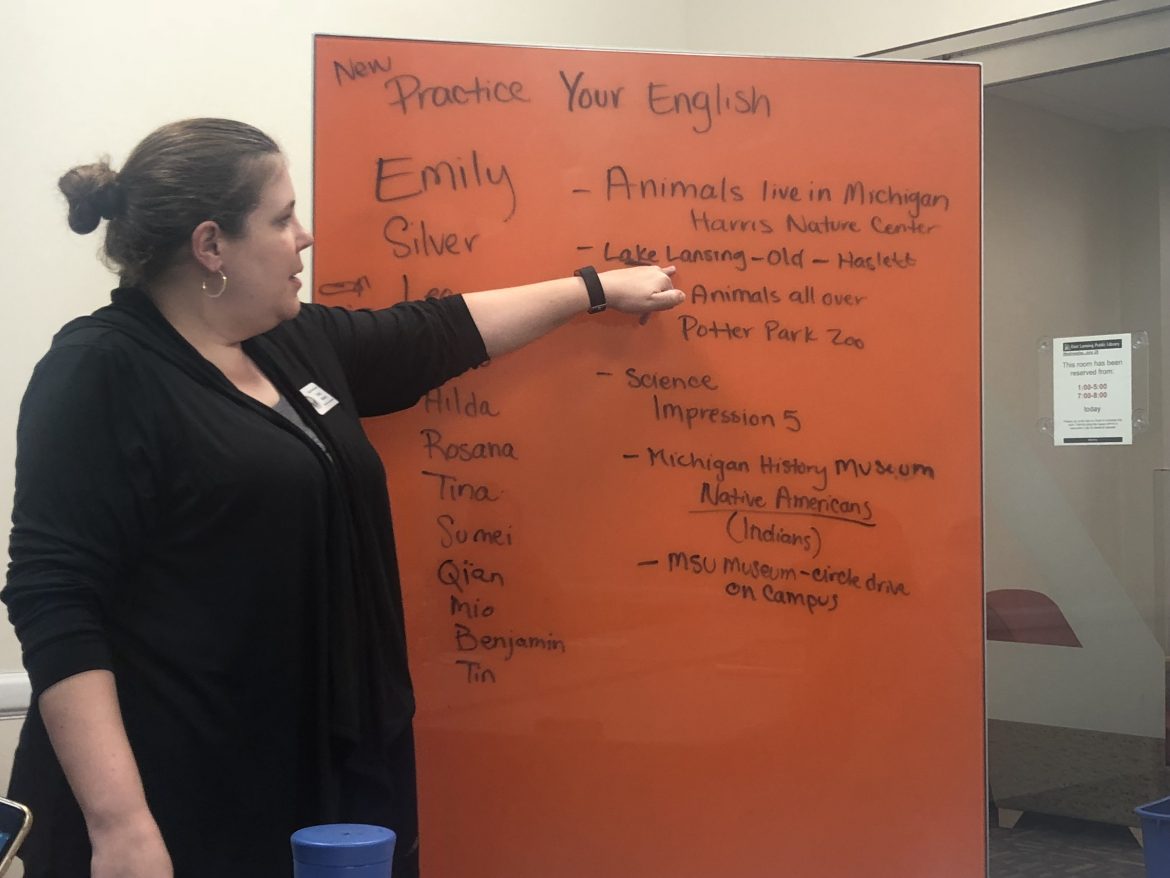 Emily Adams is recommending students where to visit in the class.

Rosana Souza was searching for a place to help her Brazilian sister-in-law to improve her English. Souza’s sister-in-law, Hilda Pamplona, moved here to visit and to communicate with more people. Pamplona is not alone.

According to a report from DATA USA, in 2015, 8,206 (16.9%) of East Lansing citizens are non-English speakers, which is lower than the national average of 21.1%. Such a small group is not ignored by the city. Instead, they get an opportunity to practice their English by learning American culture — one library is aiding in that cause.

East Lansing Public Library (ELPL) offers a Practice Your English class at the library every Wednesday from 7 p.m. to 8 p.m. The class started at least eight years ago and is open to anyone with English as their second language.

“It is open to everybody, really, in the whole mid-Michigan area,” said Emily Adams, the youth services specialist in the library, who has since taught the class for two years. “And they need to know just a little bit English to come, just a little bit.”

Pamplona had her first time in the class July 25. She said Adams explained things very well in the class.

“She writes on the board and talks to everybody,” Pamplona said.

Unlike Pamplona, who just got to East Lansing, Pamplona’s sister-in-law has lived in East Lansing for more than 30 years. She was looking for an English as second language class for Pamplona, and the program in ELPL is the only one she knows doing the summer.

“Because a lot of programs like this in the area do not have the summertime,” she said. “I appreciate it.” The class is held in a meeting room in the ELPL.

Adams said the library staff identified the class as a need for the community because East Lansing has a lot of people from all over the world. She said the people who created the program wanted to give a place to practice English and to learn about American culture.

“We are very close to students, so they come,” she said. “But also, we got a lot of husbands and wives of maybe professors. Maybe people who are doing, like, artists in residents or scholar programs; we get their family.”

Jeevan Reddy is a network engineer working at Michigan State University. He came from India to the U.S. and was searching for a place to help with speaking English.

Reddy said he wants to improve his communication because his work requires a lot of meetings, and he wants other people to understand him better when he presents.

“The class helps a little bit,” he said. “It’s more like a conversation. But I need a more professional class to explain the work I did before in the previous projects.”

Youxiang Cheng, 54, came to East Lansing from Beijing, China, to visit his son who studies at MSU, said the class is open and relaxing but a little bit easy for him.

“Because the lecture is about daily life,” he said. “Probably because I have been to the U.S. very often in recent years, what the class has been covered are not unfamiliar to me.”

The class starts with an introduction of everyone’s name and hometown, and then Adams asks the students if they have questions about American culture to begin the conversation. She said some questions are difficult and sensitive.

“One of the questions was how do I explain where do the Native Americans live,” she said. “I try to answer factually, like with facts, not my opinion but history of something. I just try to be honest.” Hilda Pamplona is reading her question from the box. Her question is: How would you name yourself if you can pick your own name?

Besides culture-related discussions, the class is designed to improve students’ English comprehension. Adams hands out grammar worksheets to students at the end of the class on Wednesday and expects them to study it to prepare for the next week. She said sometimes she prepares a little cup with different questions in it and students pull a question out and read the question then answer it.

“So then they have to read the English, understand it, and answer in English,” she said. “So it gives them an opportunity to read, answer and then we can have a conversation about that too.”

Since the class is drop in, no registration is needed. The number of students fluctuated between two to 15 with the average between six to eight students a week. Adams said the number was less than her expectation because students don’t know the library has this English conversation group.

Adams said the class was not intended to teach people English but learn about the cultures. Students with very little English would have difficulties understanding what’s going on.

“But some people come in, and they do learn English as they progress,” she said.

The class on July 25 covered the Fourth of July and methods to improve English by watching movies and shopping at Meijer. Adams suggested students watch movies in English with subtitles on and have kids ask questions to cashiers in Meijer. Pamplona said she understands everything in the class but has difficulty speaking because the classes she took before did not provide her speaking practice but writing instead. Learning English has become her dream.

“I like to hear when people are talking,” she said. “Because I think, if I listen so much, it helps me in speaking.”

Similar class like Practice Your English is not the only one offered in East Lansing, Cheng said he also takes class in Friendship House.

“I would love to try different kinds of classes,” he said.

Adams wants to take her students to the Potter Park Zoo, to Michigan museums, even to sledding. This past winter, she took a main group of students from the class who have never seen snow before sledding.

“That’s my first goal, is to try and figure out how to travel for them to see more things. Especially like a goal to the Fenner Nature Center and see the animals that live in Michigan. I think that would be fun, too,” she said.

Adams joined the class because she likes to talk with people. She said helping people makes her happy and the job is rewarding.

“It’s a little hard when they hear that maybe their friends might be sent home: they get worried,” she said.  “I worry about them. Things like that. So it’s been a crazy couple of years trying to help them through that stuff, too.”