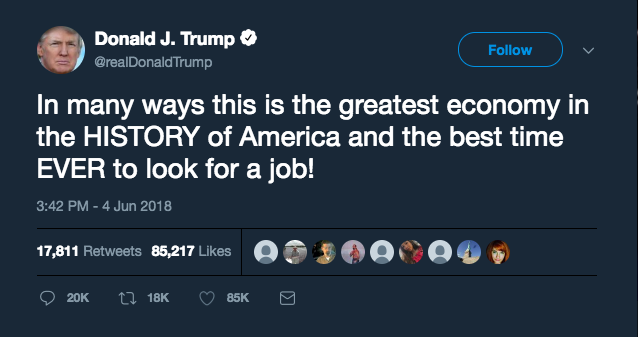 On June 4, 2018, President Trump tweeted that now is the “best time ever to look for a job,” and that this is “the greatest economy in the history of America”.

According to the Michigan Department of Technology, Management & Budget, this holds partially true. U.S. Jobless rates steadily declined in the last year, dropping from 4.4 to 3.9 percent from April 2017 to April 2018.

Jim Rhein, an economic analyst at the Detroit branch of the Michigan Department of Technology, Management & Budget, gave his insight on the labor markets in Michigan and how job markets are performing at this time in the economy.

Q: When it comes to the tweet that President Trump made, do you think that this holds true for Michigan specifically?

Jim Rhein: That’s a pretty broad question. I think as far as the labor market is concerned, currently it’s a very strong labor market. Right now, we are having fairly low [unemployment] rates. Not the lowest, but the labor markets are in pretty good shape and have been since about 2015 and it’s been improving since the recession. But like I said, it’s kind of a loaded question, because it depends on the job. It depends on what skills are available and what jobs are available, because that’s still a hurdle that people have to go over.

In Michigan specifically, when you go up north in the wintertime, jobless rates are very high, and that’s just the nature of some areas in Michigan. In the summertime when the tourism season hits, it’s a lot easier. With that said, it’s a fairly good time right now, relative to Michigan’s history, to get a job. The last time it was like this would have been the mid to late ’90s where the labor market was even stronger. So, when you consider that, and that we’ve had some periods of time when our jobless rates were high compared to a lot of states in the country, right now things are looking very good.

Q: As far as some job categories being stronger than others, what categories are doing well right now, and which are weaker?

Rhein: I guess it depends on what you have as your training. But right now, we can look at things from April. Right now, the strongest markets are in construction jobs, and there’s been some strong growth over the year. Professional business service is a job sector that’s widespread. There’s a lot of things involved in that, and that’s been particularly strong as of late, with growth over the year.  Also, education and health services. Health services is always strong and has been for decades. Leisure and hospitality services has been up as of late, so that’s a fairly strong category, and those are the main ones.

Ones that are relatively flat right now—meaning that there is no industry sector that is tanking right now—but other categories that have been flat and haven’t had a ton of hiring as of late are manufacturing. Manufacturing right now has been stable, and they are not hiring hand-over-foot, but they are not going down either. Another one that has been struggling is retail trade. Not that there has been huge decline, but retail trade as of April has been down, so it’s not growing right now, and there’s probably a lot of reason for that. I think that there is a lot of changes happening in that industry sector currently, so we aren’t seeing much growth. The information sector has been struggling somewhat too.

Right now, you have growth through most of the state’s industry sectors over the year, but that could change. Things could change on a dime, and in the labor market there is potential to see jobless rates decline, but they can turn it around.

Q: Going back to your original statement, you said that the question was loaded. Could you explain?

Rhein: I think it was a very general thing to say. He’s right in the sense that it’s a very good labor market period right now and it has been for a number of years, but that doesn’t correspond to individuals. There may be individuals that continue to struggle. It’s a very broad statement but in general its correct. It depends on your circumstance. That’s why I brought up the northern areas of the state. Even in the best of times, in the winter months jobless rates go high. Because of the winter, these areas are more isolated than downstate where there is a lot more opportunity. There’s always room for there to be some problems in the labor market depending on the area and depending on your field that you’ve gone into, so it’s a broad statement, but it is correct.

Q: Should people just trust such a broad tweet, even if it is coming from the president? How important is it for someone to do their own research when they see such statements online?

Rhein: Do your own research, definitely. You just don’t want to take what you hear, that’s the smartest thing right there. It’s really important to find out what’s going on out there. Without question, these things can change. This is as of April 2018. Within six months things could turn and other sectors could improve. It’s very dynamic and fluid depending on the U.S. economy and Michigan economy, you’ve just got to follow where it’s going to go.