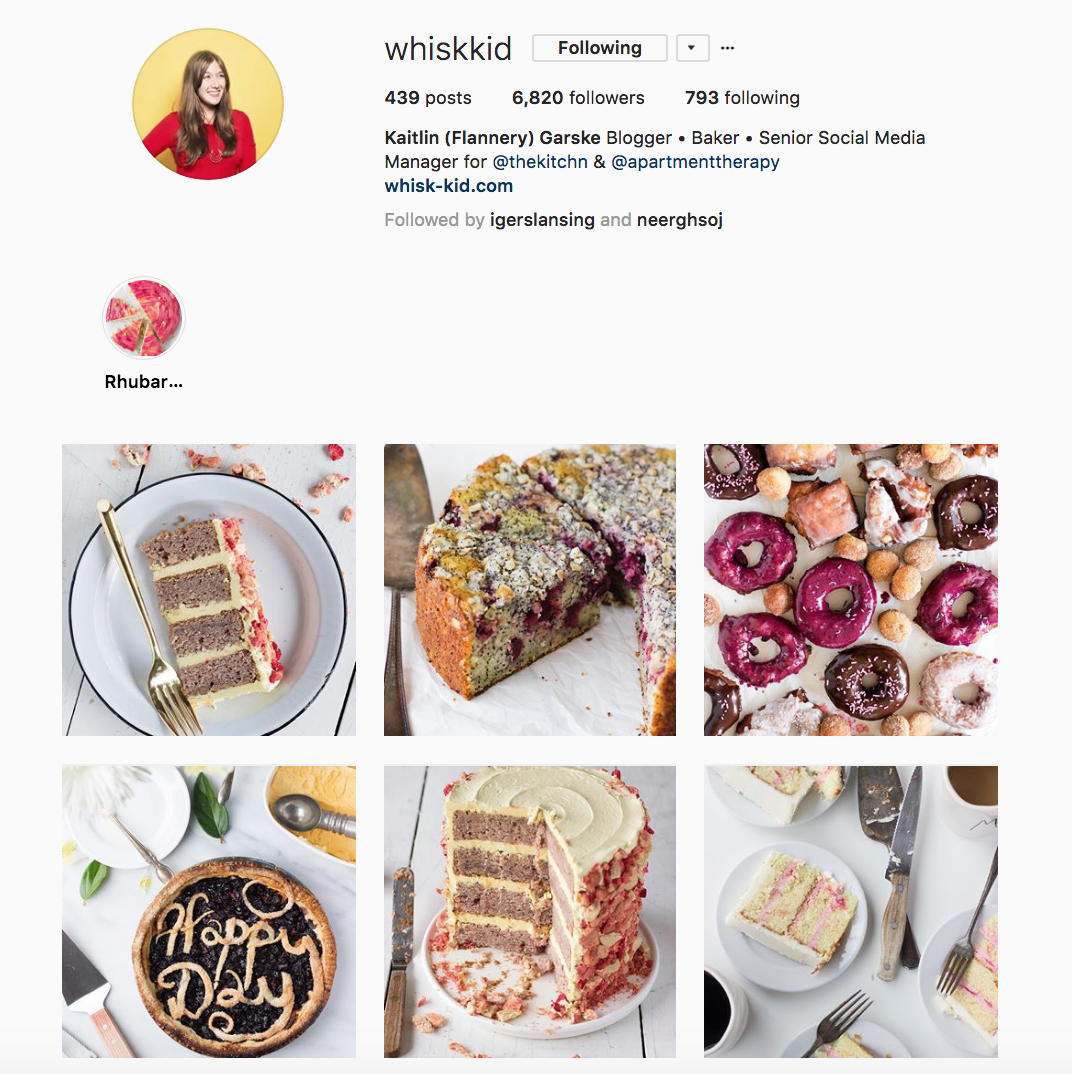 If you’ve spent any time on social media in the past few months, which according to the Pew Research Center, 68 percent of you reading this have, you’ve probably noticed a growing trend: food.

More and more food videos and photos of food are popping up on your feed and you may be wondering why. What is it about food that allows people to build a huge following, like Kaitlin Garske of Mason, Michigan? She started an Instagram account in 2009 merely out of boredom. Just nine years later, the food blogger has nearly 7,000 followers.

“I like having something to work on,” she said. “Food blogging was a great way for me to channel energy into something productive.

Garske’s account is cleverly titled @whiskkid and it features a mouthwatering array of cakes, cookies, donuts, and other delectable desserts. The craziest part– she bakes every single thing on her page herself. Now the majority of you probably aren’t food bloggers, in which case you’re probably wondering what it takes to run a food blog. For Garske, it’s as simple as being real.

“There’s a lot to be said about inspiring people to want to achieve some kind of aspirational lifestyle, but for my social presence, I just kind of want to be myself,” she said. “Nothing pretentious, just a chick who bakes and talks about stuff.”

As for the process, Garske says it starts before she even turns on the oven.

“I’m always thinking of props and styling, thinking about how different colors work together and might look in the frame. It’s time-consuming and messy from start to finish and I take a lot of test shots to get something how or where I want it to be,” she said. “I color balance all photos in photoshop and typically boost the contrast.

For Garke though, it’s all worth it in the end. “I think food blogging is so popular because it’s so relatable. Everyone has to eat and everyone wants to eat delicious things. I think for people to see so many people getting out there and trying new things is so inspiring. It’s a fun and beautiful hobby that anyone can be a part of.”

Connecting with your audience is key when it comes to blogging, but for another food blogger, it’s about connecting with those battling an all too common disease.

Katie Winter started a food blog because she is currently in recovery from anorexia.

“[She] wanted a place to connect with people that were going through the same as me and finding a love for wellness or looking after themselves again,” Winter said.

Winter has nearly nine thousand followers and like Garske, she believes it’s all about being real and honest.

“I don’t really use any specific technique. I am totally honest on my account and I just engage with people regularly,” Winter said.

For Winter, the process starts when she makes her meal.

“Sometimes I only post half the meal as it fits better on the plate, and then I go outside into the natural light and take a picture. I use VSCO to edit my pictures and then I come up with a caption that related to me that day,” Winter said. And as to why she thinks it’s becoming so popular, well it all comes down to survival.

“We need food to live and I also think people have become a little too obsessed with it because there’s so many different diets trends, and techniques, so the variety is huge which means there can be so, so many different types of people and blogs,” Winter said.

The big question still remains though, why are people so drawn to photos of food? For Joshua Green of Holt it’s simple.

“I love food. I love how many different kinds there are, I love eating it and I especially love looking at it. Obviously, I can’t eat every kind of food all of the time, so following food blogs is a way to help satisfy that.”

Green said he loves to explore the different accounts and is especially attracted to the ones that are most aesthetically pleasing.

“We live in a generation where everyone posts everything on social media. I post photos of my food often, and I know other people do too. Sometimes I have an amazing looking meal and I try so hard to make it look just as amazing on my Instagram story or Snapchat, but it just never does it justice. When people are able to capture photos of an amazing meal and make it look just as amazing, that’s what I like to see on my feed,” Green said.