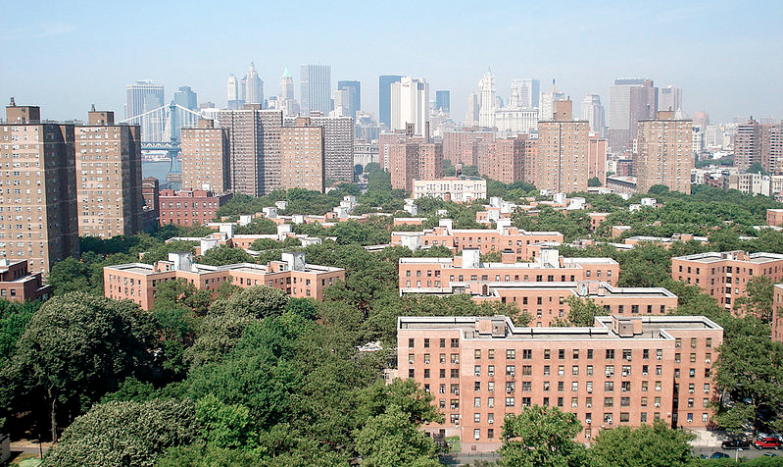 NEW YORK — As more people move into a city, population, housing and overall living expenses seem to go one way—up. Manhattan is no different.

People move in, prices increase, and those who have lived in a neighborhood their entire life may find that they can no longer afford it, said Nicole Gelinas a Senior Fellow at the Manhattan Institute, a local based think tank, and an expert in state and local fiscal policy, along with public transportation and infrastructure.

The cost of living has changed significantly over several different time periods, and for different reasons she said.

“Since the financial crisis, so we’ll say since 2008, the sales market has certainly increased markedly in prices,” Gelinas said. “The main driver of that is not so much local people purchasing houses, but the residential market turned into an investment market for global investors.”

What does that mean? Gelinas explained that some investors are afraid that their assets may lose value closer to their home countries, so they buy apartments in places like New York City, London and Miami. This ‘global market’ has increased rental prices in Manhattan and other boroughs, she added.

“If you were making a good income but you were pushed out of the Manhattan market you bought in Brooklyn, you bought in parts of Queens, that pushed the prices higher in those markets.,” Gelinas said.

“If you look at the market rate for a one-bedroom new-build apartment in Manhattan, the prices really only kept up with inflation over the past 15 years or so,” Gelinas explained.

Gary Malin is the President of Citi Habitats, a residential real estate brokerage firm in New York City that specializes in the rental market. He said he has seen little change in the prices of rental properties.

“Over the last few years pricing has remained relatively stable, it might go up a point or down a point or two,” Gary Malin said.

Emily McDonald, the PR Specialist at Streeteasy, an online real estate market place, shared data that their research team gathered, regarding changes in rental and purchasing prices dating from January 1998 to April 2018.

The first graph shows the increase in purchasing prices from 1998 to 2018, the second shows the rate at which rental prices have increased during the same period. Malin explained that people seem to be more open-minded about looking for apartments in new areas, like Brooklyn and Queens.

“People are more adventurous in their sort of searching process now,” Malin said.

Adding, that the surge of potential new renters in these neighborhoods may be attributed to the newly available transportation opportunities such as Uber.

“It ultimately comes down to the price that people need to make sacrifices with, so you know the amenities are a nice add-on, it’s just whether or not you plan on using them,” Malin said.

There is still another side of the market, Gelinas explained, a side that cannot afford to pay rent, even in an apartment with the least number of amenities.

“That part of the market is basically ignored,” Gelinas said. “You’re stuck in older builds, lower-quality rental apartments, or far out into the boroughs where mass transit is not as good as it is in Manhattan and Northern Brooklyn.”

Adding, “think about who builders build for—they build for people who can afford to rent a new apartment, they assessed the market pretty well, the real risk for them is that they over build.”

If you lived in a neighborhood that has had a major demographic change over the last 15 years, you may not be able to afford the same neighborhood you grew up in, Gelinas said.

“The rental apartments, anything that’s under $2,000, there’s massive competition for a scarce number of apartments,” Gelinas added.

Malin explained that because the number of affordable rental units is limited, people need to understand how competitive the market is.

“Sometimes owners take multiple applications, so just because you submitted an application doesn’t necessarily mean you’re going to get the apartment,” Malin said.

In addition, Malin explained why owners of these apartments want money and proof of money upfront, a process that not all income brackets can afford.

“I explain to people that get upset about the process, it’s like the owner is giving you a loan, you know if you’re going to rent an apartment for $2,000 a month, you’re basically asking them to loan you $24,000,” he said.

Manhattan is and has been expensive Gelinas explained, that is not going to change.

“I think the Manhattan part of the story, that’s been done,” she said. “You can’t be a middle-class person and rent an apartment with a family on the Upper West Side, I mean that’s been true probably since the ’90s.”

Gelinas added that the new part of this story is that neighborhoods outside of the city, that are supposed to have cheaper cost of living, or the ‘safety-belts’ as she described them, these are becoming less affordable.

The idea that more people, some that may be able to afford a higher cost of living, are moving into areas that were once these ‘safety belts’, brings up the question about gentrification in the neighborhoods, which Gelinas said does contribute to more people being squeezed out of Manhattan.

Over the past 30 years, as more people have moved to New York, it’s neighborhoods have changed Gelinas explained. People who may have stayed in some of these neighborhoods, they wanted gentrification, they wanted less crime, less vacant lots or buildings, but gentrification also comes with a lot of different results, she added.

“If you owned a home in these neighborhoods 30 years ago, that home is worth much, much more today, so you benefited,” Gelinas said. “If you were a rent regulated renter you’re doing ok in that you can’t be kicked out of your apartment, but your children certainly can’t live nearby and you’ve seen the neighborhood change.”

If your apartment is not rent regulated, this is when you start to see people being pushed out by a higher rent, Gelinas explained.

“If you’re a poor earner, you’re working class or even a middle class person or family and your neighborhood has improved, it’s no surprise that people with more money want to live there and that makes it more expensive for you to live there,” Gelinas said.

As Malin explained, more people are willing to move further into these neighborhoods.

“Going up into Harlem, into the Bronx, you know those areas are becoming more popular,” Malin said. “So, I think that these other areas start to strengthen, areas that weren’t that strong, start to get more invested in them.”

Gentrification does not only change the housing market Gelinas explained.

While some people may blame gentrification for the growing population and price increase in New York, that is not necessarily the only force at work, Gelinas explained.

“More people who are native New Yorkers or native-born Americans move out of the city every year, the people who replace them tend to be immigrants,” Gelinas said. “They come from places that are poorer, they do crowd into apartments, they cut up the one bedroom, they move in illegal basement apartments and that’s because they obviously have no other choice, but that’s what keeps our population increasing.” Public housing has also been suggested to ease the cities’ expensive cost of living, however it is not a long-term solution Gelinas said.

“The public housing issue, and we have 407,000 people who live in public housing, there’s not very much turnover,” Gelinas explained. “It’s a one-time solution.”

Gelinas added that the city, in return for permits to build more expensive housing, has developers put aside a varied-small percentage, usually around 20 percent, of their property toward affordable housing.

“But that’s not very much, you’re thinking it’s about 20,000 affordable housing units a year, they award these things by lottery, it’s harder to get one of these apartments than it is Harvard,” Gelinas said.

Gentrification and immigration are only two factors in this complex issue, she explained, adding there is a new factor known as ‘The Airbnb Effect’.

“The same global cities where you have global investors buying up these apartments, you have a significant percentage of the apartments in the most popular neighborhoods that are just full time Airbnb apartments,” she said.

This effects rent in a significant way she added.

Gelinas explained that the New York City Comptroller Scott M. Stringer conducted a study that explains how many apartments are taken off the New York Market because of this effect, and in turn how this has increased rents for New Yorkers.

The study reports, “between 2009 and 2016, approximately 9.2 percent of the citywide increase in rental rates can be attributed to Airbnb.”

Gelinas added, “if you have an apartment not on the market, supply and demand, everyone else is competing for a smaller number of apartments.”