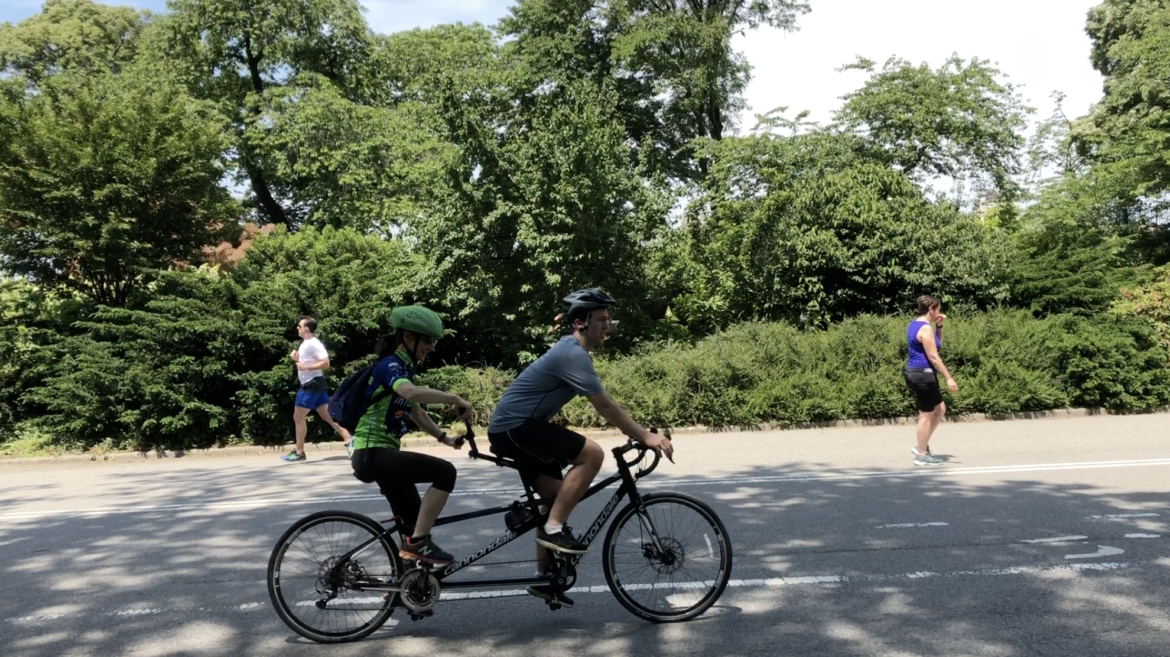 NEW YORK — Susan Genis has limited vision. When she’s out, she wears dark, bulky sunglasses that cover all sides of her eyes to protect the vision she has left from the sun. She doesn’t use a walking stick or need a guide dog’s help to navigate the hustle and bustle of New York’s streets – she has already been doing that for years.

But when it comes to some things, Genis needs a little help. One of those things is riding a bike.

“It wouldn’t be safe,” Genis said.

Almost every Saturday morning, Genis makes her way to the East 90th Street entrance of Central Park and meets a group of about 20 that gather in front of a row of tandem bikes. They all sport the same deep blue and bright green jerseys and put on the same bright green helmets that bear the logo, “InTandem.”

Most of the individuals in the group have some sort of visual or physical disability. But their disability doesn’t stop them from getting on the back of tandem bike and riding through Central Park. Thanks to an organization called InTandem, they can do so safely and comfortably with the help of a guide riding at the front of the bike.

“It really just brought a lot of joy into my life,” Genis said. “It’s something I can come out and just let go of other things and enjoy the physical aspect of it and being outdoors and moving fast. I do a lot of walking, but it’s not the same as flying on a bike. There’s great sense of freedom.”

InTandem was founded in 2010 on the principle of giving those with a disability an opportunity ride a bike. It’s founder Artie Elefant lost his vision due to retinitis pigmentosa, a disease that causes the retina to deteriorate. He loved cycling and wasn’t prepared to give it up.

With InTandem, the captain – the guide sitting at the front of the bike – assists the stoker – the person who sits at the back (in this case, the person with the disability) – by leading the bike’s navigation.

It’s a system that’s based on communication; both the captain and the stoker must work together in order to be able to ride the tandem successfully.

“It doesn’t get much more inclusive than being on the same bike as a member of your community. You really get to connect with people that way,” InTandem’s director of operations Jonathon Epstein said.

Epstein has dedicated his life to advocating for more accessible opportunities for those with disabilities. As an employee for the Human Rights Campaign, he’s been a part of several different projects over the years. He says out of them all, InTandem has been the most successful initiative he’s worked on.

“People do not focus on people’s disabilities when they’re here. They just go on a ride with people and have a good time,” Epstein said. “There’s a lot of stigma around disability. I think the best way to educate the general public around disability is to create an opportunity for people to just do something fun alongside people with disabilities, where all this stigma goes out the window and all you’re doing is just riding with people and having fun.”

It’s Epstein’s responsibility to organize and lead each of the group’s weekly Saturday morning and Thursday evening rides around Central Park. Since joining in 2013, he’s trained over 300 captains and over 100 stokers.

“I train them on safety tandem bike techniques and communication and disability awareness,” Epstein said. “All of our stokers, I train them around everything they need to know and to ride safely and comfortably and efficiently.”

Giving those who have a disability a chance to learn how to ride isn’t the only goal of InTandem. Epstein hopes to create a social community for its members.

“A lot of our members have said, ‘The thing that gets me out of bed in the morning is thinking about that ride on Saturday,’” Epstein said. “People have made real lasting friendships. They go on trips together. They’re like family.” 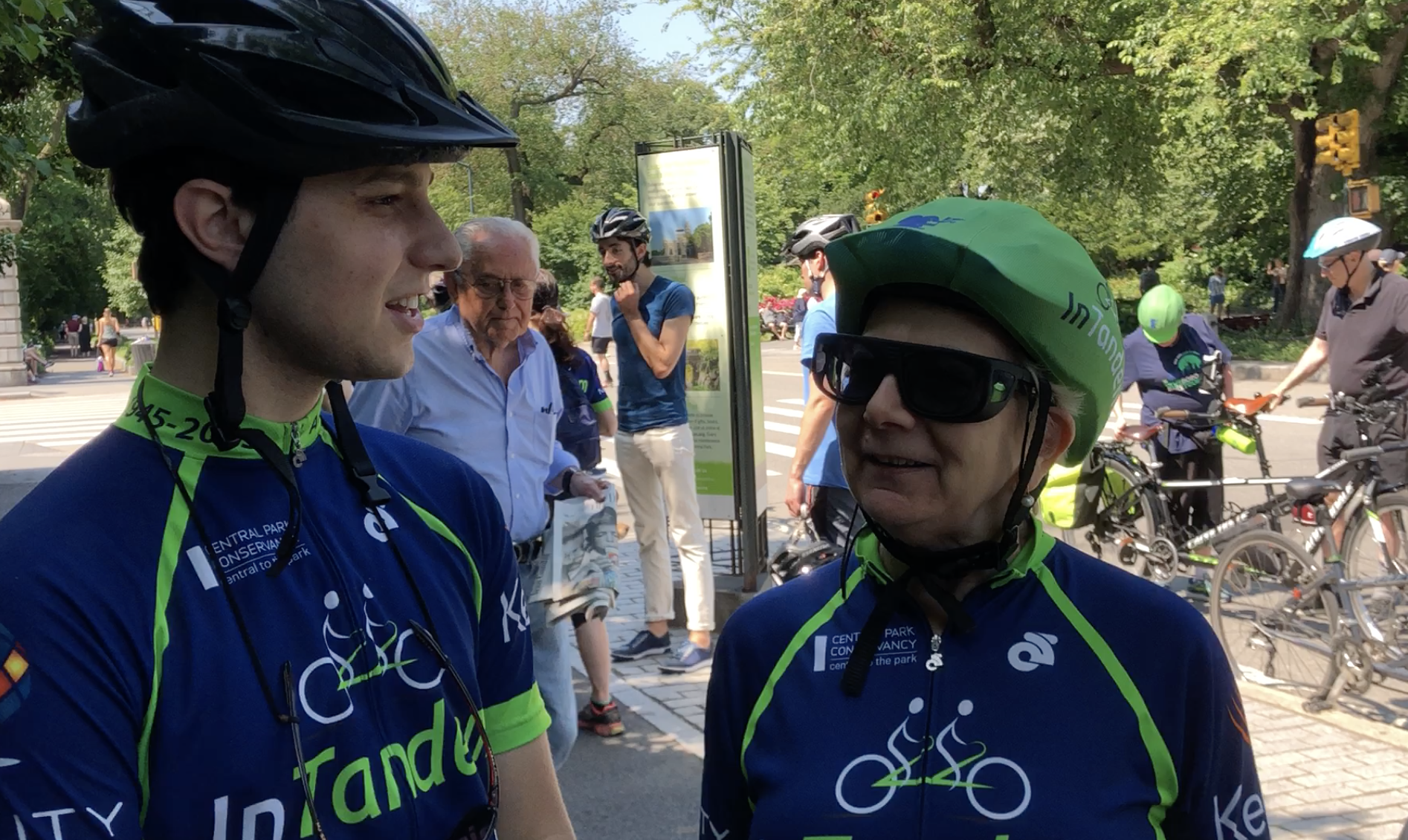 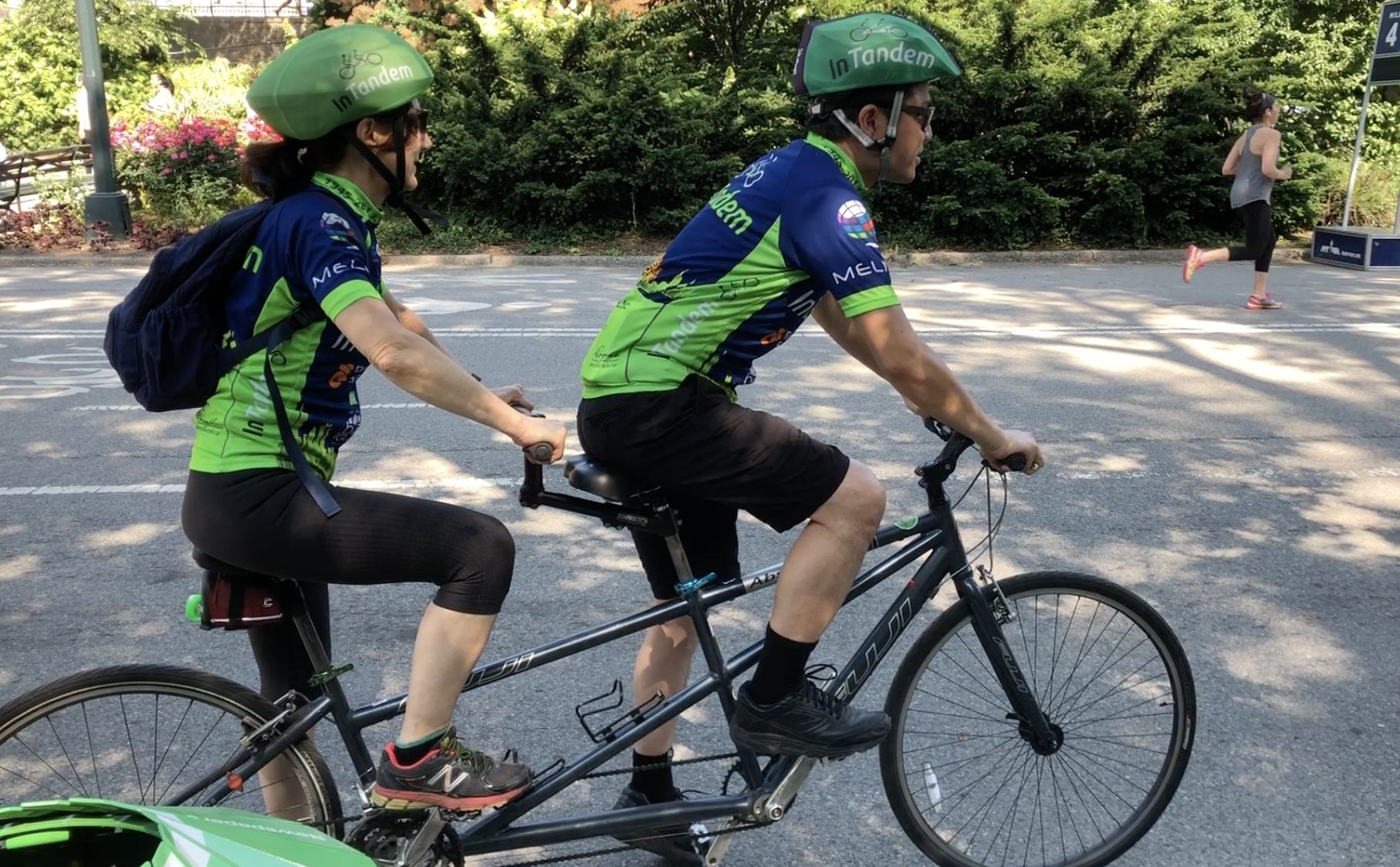 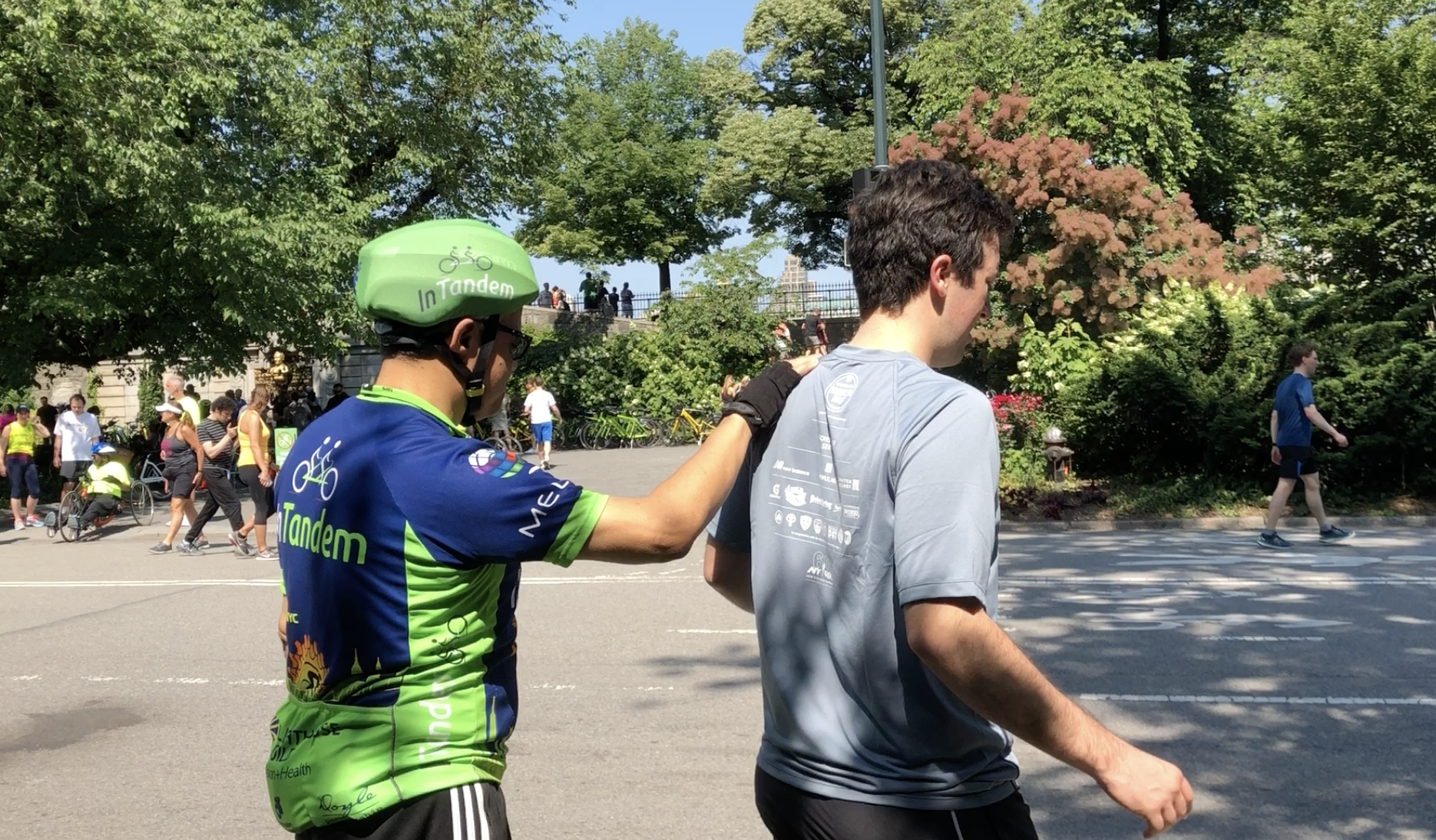 An InTandem captain (right) leading a stoker (left) to one of the tandem bicycles. Photo by Camille Douglas. 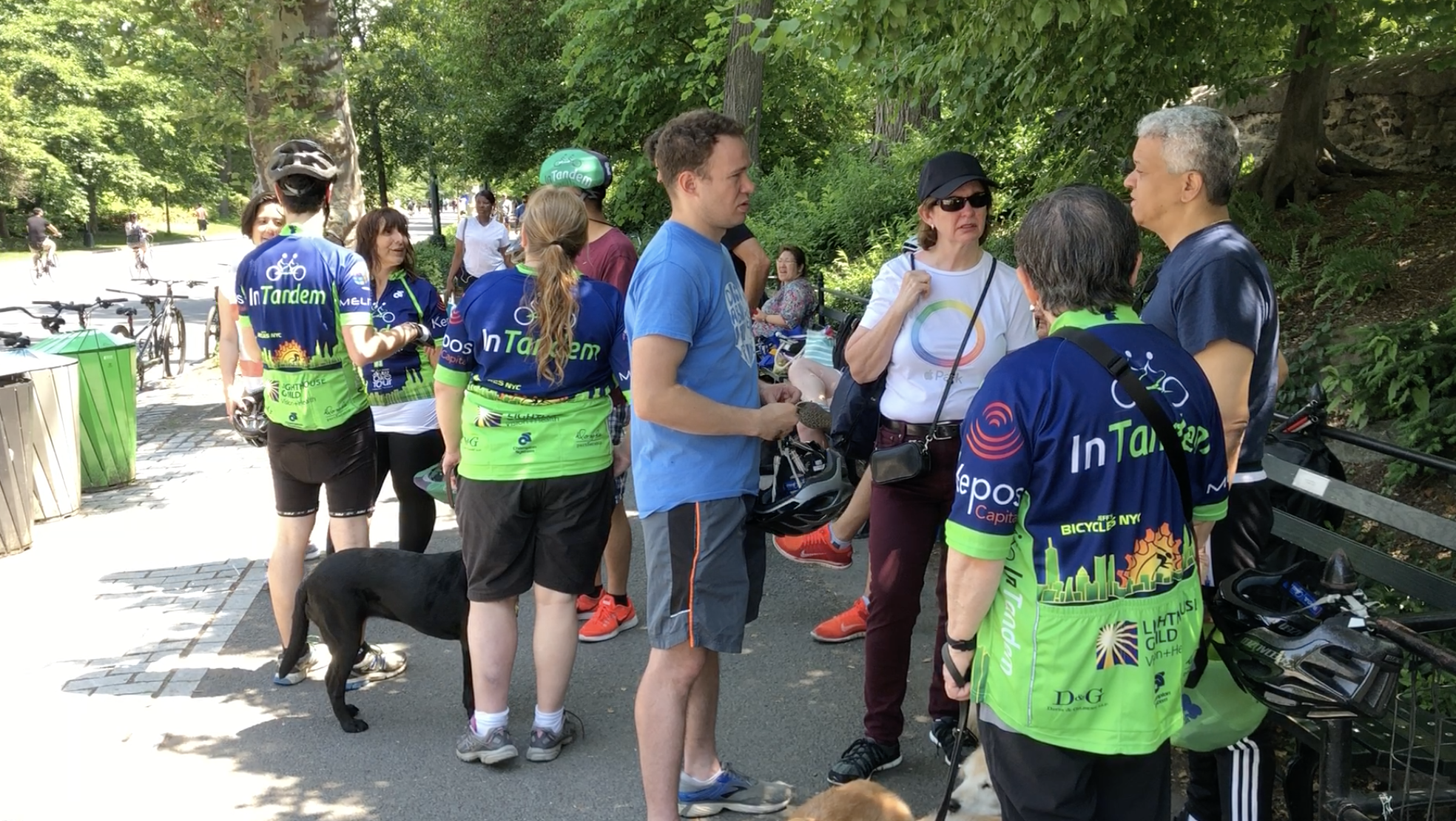 The InTandem group meeting on a Saturday morning in Central Park. Photo by Camille Douglas.

Through the group, Genis met Jordan Stein, a volunteer that serves as a captain. The two joined InTandem around the same time and have been almost inseparable ever since.

“We’ve biking together since early on and had some great experiences,” Genis said. “We did the City Streets Ride together last summer and along the way, we did a zipline. I had never done that.”

Stein and Genis are gearing up to complete the Epic Ride in Brooklyn – about a 40 mile ride – at the end of July together.

“We’re actually going to be marshalling it together on a tandem and we’re going to be stopping and fixing people’s bikes along the way,” Stein said.

“He’s going to do the fixing, I will do the stopping,” Genis added.

As for the future of InTandem, Epstein hopes to create jobs for the members to become more involved in shaping and expanding the organization.