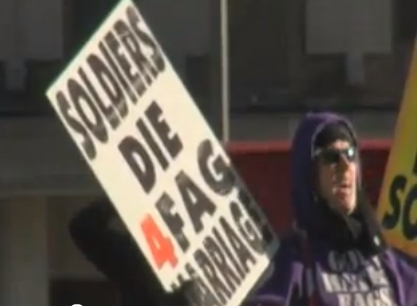 When Westboro Baptist Church announced last month that East Lansing had been added to its protest schedule, freshman Sasha Chemey knew he had to act quickly.

“I wanted to bring people together to make sure that nobody got hurt and that nobody had to lash out,” he said, while outside the MSU Union at the counter-protest he had organized.

The church has been controversial for the past decade due to its anti-gay positions and protests, including picketing at the funerals of American servicemen.  The fact that they are allowed to protest at all, though, is something Chemey says is very important.

“I think it’s really great that America can have a First Amendment that not only protects the hate speech of Westboro, but also the radical love and acceptance of here,” he says, gesturing to the counter-protesters.

Prior to the Union, the group protested outside Lansing Eastern High School.  There, they were met with a large group of community members, who formed a “wall of love” separating the picketers from students arriving at the school.

“And that’s what this is all about,” says Chemey.  “Love always wins here.”

The stop was scheduled by the church to coincide with an event it was participating in at Central Michigan University later in the day.  It was the first time the group had made a stop in East Lansing since November 2010, when it protested outside East Lansing High School.