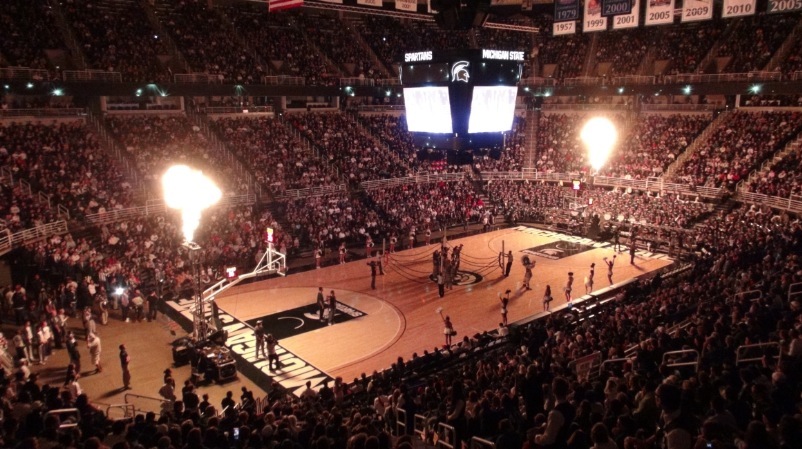 This year’s MSU basketball teams took the court for the first time. The annual midnight madness marked the official beginning of the basketball season.

Even if you try, you would not be able to avoid getting excited. Thousands of fans and students came to the Breslin center for Midnight Madness.

“I have been here a few times. I think it is really cool. How everyone shows up to watch favorite teams. How the coaches come and represent themselves. It is really entertaining,” said Rhett Burton, a Sophomore from Waverly High School.

After arriving in a model fighter jet, men’s basketball head coach Tom Izzo electrified the crowd. The marching band, the drum line and the cheerleaders entertained the crowd to keep them fired up.

It is the frist time this year that MSU basketball teams are allowed to practice together and the fans are treated to a great show.

“This event is always been very fun. I think we come here every one they had so far. Some of the players, they are kind of very great. On the women side, the women come out and we get to see some freshmen for the first time. There are a lot of screams and there are a lot of funs. We are really the guys who are their fans. So we really love this event,” said Patrick Baughan, a retired business man.

After a long evening of fun, basketball fans left tired but satisfied. ” We are really the guys who are their fans. So we really love this event,” Patrick added.

Midnight Madness opened the 2011-2012 Michigan State basketball season and the first game is on October 30th at the Breslin Center.