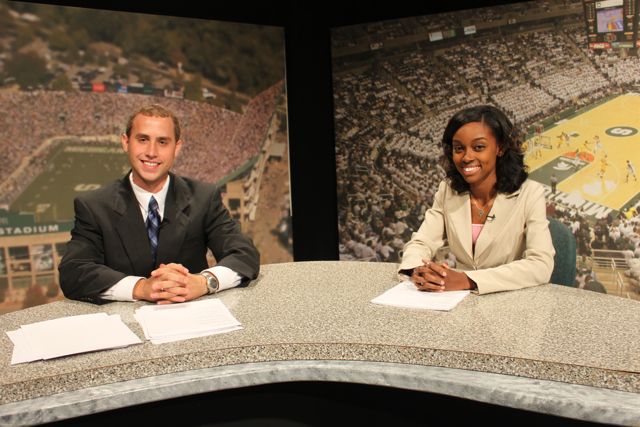 Welcome to focal point…I am Erica Zazo, your “Behind the Scenes” blogger for the night (in a very anchorly voice). Lets take a look at the highlights from tonight’s show:

The night definitely started early for the crew, as they arrived an hour before the cast showed up at 7:00 . I personally believe it was a prank on the newbies but who knows. The cameras were rolled out, plugged in, and turned on. The stage was all set and the anchors and directors filed in one by one. Eventually the light switches were flipped, only for all of us to realize that none of them worked. Our handy dandy lighting class came in to fix them, and in about 30 minutes the set was lit.

While some anchors practiced their lines in the hallway, others were getting powdered up 🙂

The crew members were positioned behind their cameras and the others packed into the control room to man the behind the scenes equipment. It is now 9:40 and we are finally starting to shoot…only one hour and forty min behind schedule. “STAND BY!”

Take one…Take two…Take three… It took a few tries to get the show rolling, but the anchors and crew worked together to get the first segment done.

Due to our late start filming, we went over our rented studio time. Once the clocks hit 10:00 we were warned that the alarms on the building were set and that we were locked in until filming was over. I felt like we were all jail birds, locked up in the studio at this point. We had to make sure not to prop the door too long or the police would show up!

It was very humorous to sit in the studio and watch the crew and anchors when the audio and film was running. Everyone was super quiet and whispering, but the second the video ended, they were fixed on the cameras again. I’m pretty sure my fingers typing away on my keyboard was the loudest thing in the studio during this time. Maybe next week I should think of something funny to yell to give everyone a laugh 🙂

After a quick break, the second half of the show was filmed and we all celebrated with our first Focal Point victory!

Overall, the show ran smoothly with minimal interruptions. The crew joked around off set about each others performance and the lead anchors had some laughs off camera. Bob our producer was super pleased with the job well done by the cast and crew during our first filmed show for Focal Point.