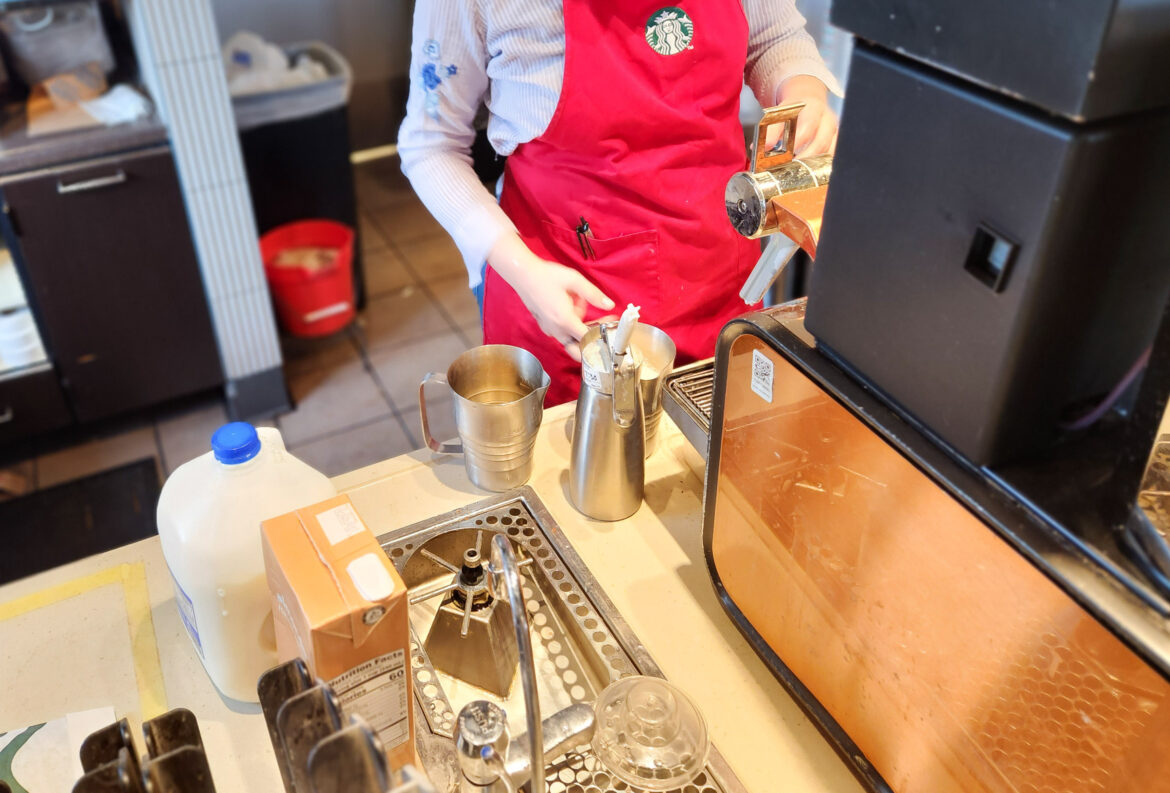 A Starbucks barista mixes a drink at the Glencoe Crossing Starbucks in Ann Arbor, Michigan. Workers at the store voted to unionize in July and have gone on strike four times since.

A steady stream of customers rolled through the drive-thru at the Starbucks at Glencoe Crossing, a shopping center near U.S. 23 between Ann Arbor and Ypsilanti, Michigan. Inside, several baristas in dark green and red aprons bustled back and forth behind the counter.

The Glencoe Crossing Starbucks, at 4585 Washtenaw Avenue, has become a hotspot for union activity. Workers at Glencoe Crossing and about 100 other locations led a three-day strike over the weekend to protest what they say are unfair labor practices by the Seattle-based coffee giant.

“They were one of the first stores in the area to organize,” said Alec Hershman, an advocate who has been working with partners at the Glencoe Crossing location on their legal rights and how to use direct action tactics, such as strikes.

In 2018, Hershman and his coworkers at Mighty Good Coffee founded the second baristas union in the country, the Washtenaw Area Coffee Workers Association. He now co-chairs the Education Committee for the Ypsilanti chapter of Industrial Workers of the World.

Workers have successfully unionized at more than 260 Starbucks locations in the United States, including five in Ann Arbor. But union advocates say Starbucks is engaging in unfair and illegal union-busting tactics to stop the movement. Baristas say the company has fired union leaders and closed stores with strong union support.

Starbucks officials have criticized union tactics and said they’re committed to the bargaining process. The company has more than 9,000 company-owned U.S. locations, in addition to more than 6,000 licensed stores.

Sasha Anisimova, 26, a social work student at Eastern Michigan University, organized the store’s union drive in January and its first strike in August. She is a former member of the UAW from her time as a machinist in Ohio.

“I was no stranger to organized labor,” she said.

Staff concerns include pay, unruly and unsafe customers and understaffing.

Anisimova said workers don’t have “control of the floor,” meaning they cannot decide who comes in or out of the store. If they are overwhelmed with orders, they cannot turn off mobile ordering or close the drive-thru. If a customer is sexually harassing or verbally assaulting a barista, even supervisors don’t have the authority to remove them from the premises.

“The fact that I had to sit here and beg for my protection at work was just ridiculous to me,” Anisimova said.

Mell, a former Glencoe Crossing Starbucks employee involved in the unionizing effort who asked to be identified only by her nickname to avoid retaliation from her current and potential future employers, said staff aren’t able to keep up with Starbucks cleanliness standards when closing the store because they have so few workers. She said customers sometimes have to wait 40 minutes for their drink orders.

“It is an unsafe, toxic work environment,” said Mell, who recently left Starbucks for another job, saying that working there was detrimental to her mental health.

“I am hilariously overworked,” Mell said. “My breaks are at least an hour late, if not two hours late from when they should be.”

She said employees have occupational safety concerns as well. She said the drains behind the counter in her store are not properly sloped, so baristas often have to walk through standing water. Starbucks put down non-slip mats, but Mell said that is not enough. Workers filed a complaint with the Occupational Safety and Health Administration.

OSHA cited Starbucks and fined the franchise $2,100. The case is still open.

Workers at the store won their union election in June, almost six months after filing the required union authorization cards. After the election, workers began negotiating with Starbucks for a contract.

But union organizers said Starbucks has not been cooperating in the next step of the process. Workers at Glencoe Crossing say they’ve been waiting for six months for a date to negotiate. The labor board recently ruled that Starbucks broke federal labor law when it refused to negotiate with its flagship Seattle store.

The Glencoe Crossing store is using other tactics to apply pressure to Starbucks – namely, going on strike.

The store has struck four times since August. Anisimova said the first strike was held to protest expanding the store’s hours.

“It went incredible,”  she said. “We had overwhelming support in our first strike.”

Anisimova worked at the Glencoe Crossing Starbucks for about a year before she was fired shortly after that first strike. She and other partners at the store said it was retaliation for union activities.

Hershman agreed, referring to allegations across the country from other baristas who say Starbucks fired them for minor infractions after they successfully organized a union drive.

“A lot of times they look like something very pedantic,” he said. “And it just so happens that that someone is also like, you know, a key organizing person in their shop.”

Anisimova said she was fired for “yelling” during several different meetings with store leadership. While her termination letter referenced five write-ups for such behavior, she said she was not notified at the time they were issued.

The store’s second strike started less than 12 hours after Anisimova was fired. Workers at the Glencoe Crossing Starbucks shut down the store for most of Labor Day weekend, only opening on Labor Day, when they would be paid time and a half because of the federal holiday. It did not get Anisimova reinstated, but she said it was “a monumental success” because of the message it sent to Starbucks.

Anisimova filed an unfair labor practice charge with the board in September. Allegations include retaliation for union activity and discharge in order to “discourage membership in any labor organization.” Starbucks has not yet responded to the charge.

In October, a board judge ordered a barista in Ann Arbor be reinstated with back pay for wrongful termination. To date, the board has issued at least six complaints to Starbucks in response to unfair labor practice charges. Hundreds of cases remain open.

The third strike was part of a nationwide action on Nov. 17, Starbucks’ annual Red Cup Day. During the holiday event, customers receive a free limited-edition red cup with any holiday or fall drink they order. Partners said it is an extremely busy and stressful day.

The Glencoe Crossing store joined two other stores in the Ann Arbor area and more than 100 across the country in “Red Cup Rebellion.” Workers closed their stores and protested outside with signs during their scheduled shifts.

“The only demand we have is to negotiate a contract,” Anisimova said.

Workers say they’ve received support from customers and other unions. Members of a local postal workers union stopped by to drop off hand warmers and gloves.

Anisimova now works at Michigan Medicine but is still part of the bargaining process for the Starbucks union at Glencoe Crossing.

“What’s been really cool is this ‘step up’ mentality of the workers,” she said. “You cut off one head and two more grow back in its place.”