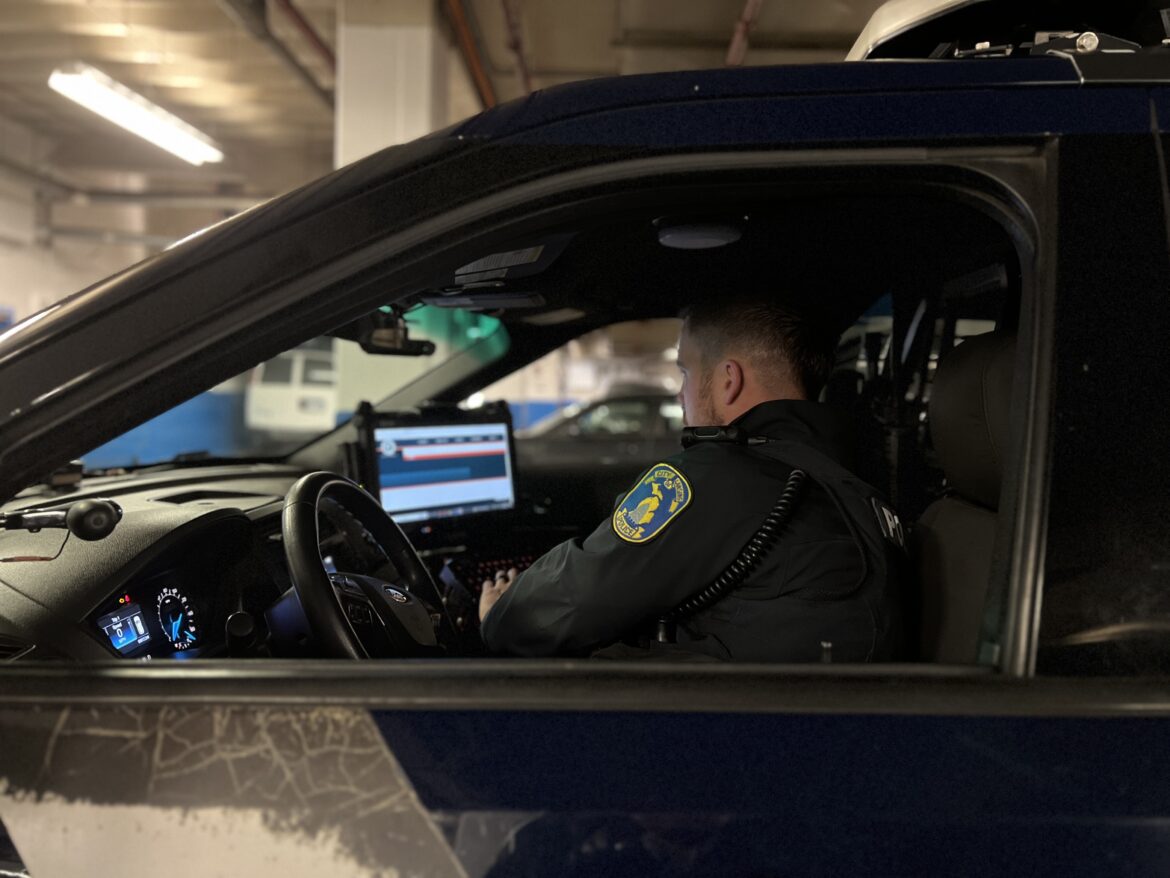 Lansing Community Service Officer Glenn Briggs scrolls through the city’s website while in his police vehicle. Briggs has been an officer in the police department's community service unit for about two years and has been working in the department for five years.

Efforts to reform local police departments — along with an influx of targeted local, state and federal funding over the past decade — are fueling an expansion of community policing units.

The goal is to better connect police officers with local residents to work together to identify and solve problems facing communities, according to the U.S. Department of Justice. The model rose to popularity in the 1990s, with federal funds available to implement community policing initiatives.

The Bureau of Justice Statistics says by 2015 95% of departments in cities with populations over 250,000 had an official mission statement with a commitment to community policing.

The Biden Administration’s American Rescue Plan is pouring more federal resources into state and local law enforcement, with over $511 million allotted in 2021 to the Department of Justice’s Community Oriented Policing Services Office.

Glenn Briggs, a community service officer for the Lansing Police Department, said he has a smaller assigned area than a typical patrol officer, which allows him to make a personal connection with people in the area. He said he typically responds to fewer calls and spends more time on service duties, like connecting with local nonprofits, than a regular officer.

Every month, Briggs attends a meeting at a community center near his assigned neighborhood.

“That’s not law enforcement related,” he said. “But there’s always a portion where I get the floor and I give them an update on what’s going on. And then I say, ‘What do you guys need from me?’”

Briggs’s daily work is dependent on those monthly meetings. For example, if residents are concerned about traffic, Briggs is likely to put more focus on traffic enforcement for the month.

“That’s how it’s designed to be – to be a part of the community you’re assigned to and address the issues that they have,” he said.

Lansing, a city with a population slightly above 110,000, says connections between residents and police officers has reduced crime and allowed officers us to hold themselves more accountable, according to the department’s website.

Jessica Martin, a social work supervisor for the police department, said that she began approaching policing in a different way while working as an officer. She said she became invested in the area’s crisis intervention team and got her master’s of social work from Michigan State University.

“We work together to connect people in the community to the resources and support that are available,” she said. “Social service needs are not police officers’ area of experience. They want to try to help but they don’t always know the resources or who to call or how to help in some of those circumstances.”

Other area departments use similar approaches.

MSU police spokesperson Dana Whyte said the department’s community engagement unit is responsible for interactions with students on the East Lansing campus, including attending events and meeting with campus groups.

Whyte said officers serving on the unit do more field work. Officers’ schedules are determined by the events they need to attend to get to know the community better.

Although the unit has been around for the past decade, MSU Vice President of Public Safety and Chief of Police Marlon Lynch has expanded the unit.

“Since he started, we’ve allocated more resources to the unit and we’re really trying to make those officers more known to our community members,” Whyte said. “We changed all of the signage on the outside of the offices so students can become more familiar with them and know that they are the police department, and we are out there and able to help.”