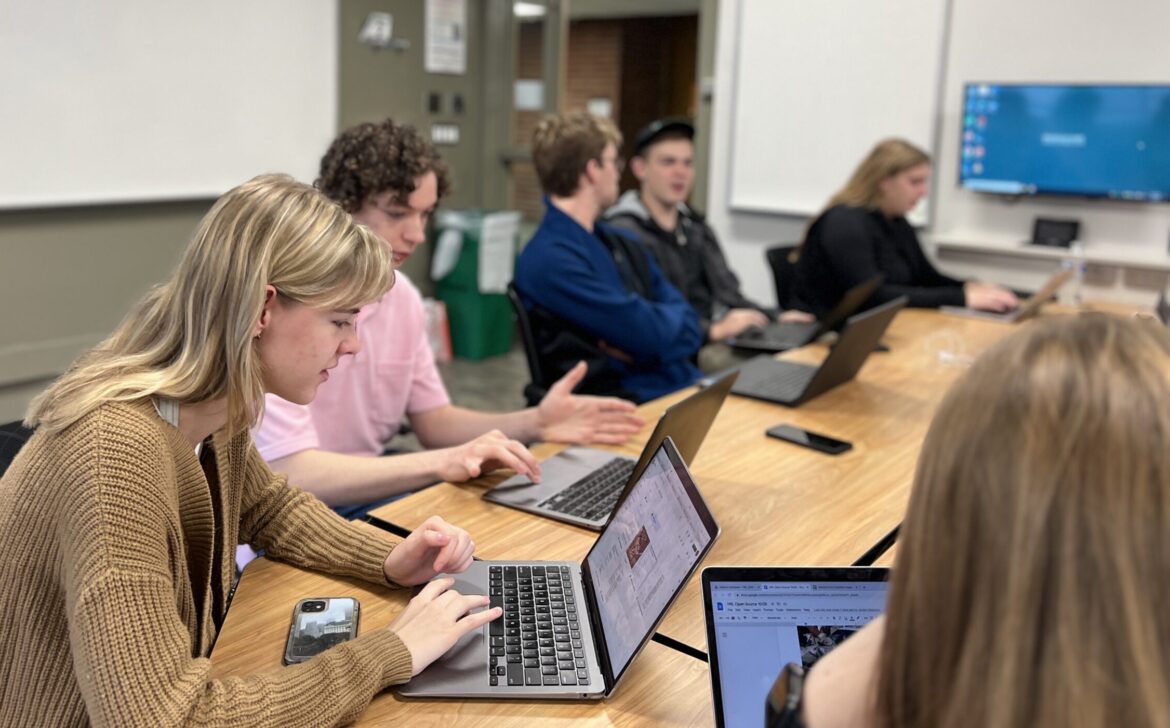 Abe Frank and Grace Cannon work with other students to review satellite imagery during a Human Rights Lab meeting on Nov. 4. The students discussed progress on a Libya project for the International Criminal Court.

Abe Frank — nose and forehead scrunched with one eyebrow slightly raised — looked at his computer screen. He was searching through satellite imagery, looking for locations he wouldn’t talk about.

Frank, a lab leader for James Madison College’s Human Rights Lab, is working with other students in the program to assist the International Criminal Court on a project. The lab searches for evidence of crimes such as genocide, crimes against humanity, war crimes and the crime of aggression under review by the international organization.

Frank said he can’t disclose much about this project, which originates in Libya, because releasing information about ongoing investigations could endanger the court’s work.

Frank started working at the lab during his sophomore year. Last fall, he compiled a database of private military companies including Raytheon, Northrop Grumman and Blackwater.

“We were trying to figure out who’s in charge, where they were, what country, who had contracts with anything fishy that they’ve done,” he said. “That was sort of casting a wide net …. We found a couple of different companies that had gender-based violence allegations against them, and so, we started to look for that.”

Frank was offered the role of lab leader this fall. He’s primarily focused on organizational leadership, delegating tasks to students. Frank also has weekly meetings with the other lab leaders and faculty adviser Robert Brathwaite.

“I enjoy doing research. A lot of research is finding dead ends and just doing the same thing over and over, but it’s also nice being rewarded,” Frank said. “It’s nice having a bigger say in things we pursue or deciding who does what and then also being able to be in-charge of communicating with students.”

Lab leader Emma Frank, who is not related to Abe Frank, said the role of lab leaders is to simplify complicated tasks for other students.

Emma said Frank does a good job of simplifying and delegating work.

“He’s really organized and he’s really good at communicating,” Emma said. “I think when you share power on something like that, probably the most important thing is shared communication, understanding what’s going on. And he’s just smart. He’s good at what he does.”

This was international relations sophomore Grace Cannon’s first year joining the lab. She said the lab has taught her the power of information on social media sites and how to recognize data to put together a story.

Cannon said Frank is always ready to help when she needs it.

“When it comes to open-source researching, he was really helpful in showing us how to narrow down and really get information,” Cannon said. “He also knows specifically what to look for, how to work the system so that you can find what you need. So, he’s found a lot of important information.”

Frank gives his students a goal while giving them the freedom needed to reach that goal, Cannon said.

“And then when we have questions along the way, he’s free to help us and we come together and talk about it and connect it together,” she said.