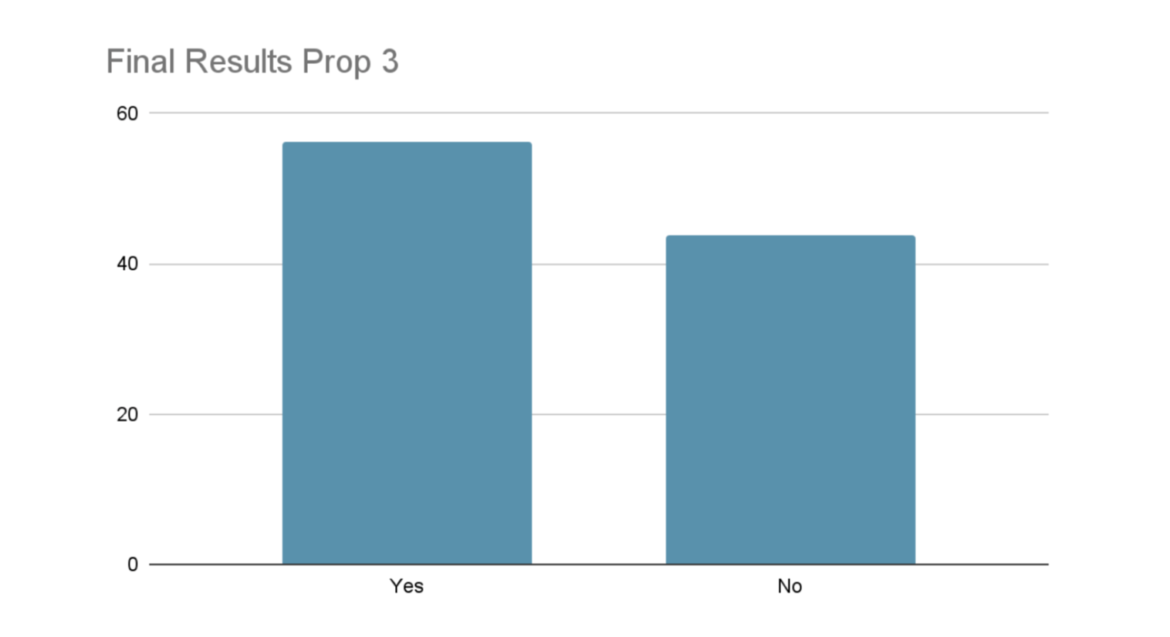 After Roe v. Wade was overturned in June, states like Michigan put abortion rights on their 2022 ballots. Over four million Michiganders lined up to vote Tuesday to make an important decision whether to make abortions a constitutional right.

Prop 3 was the name of the abortion rights proposition on the ballot which passed overwhelmingly.

Many communities had different views on Proposition 3 prior to the election. Grand Ledge resident Ryan Dahl thought his community was divided over Prop 3.

“It seems the Grand Ledge community is mixed. Many of my neighbors seem to be in support of Prop 3, but there is a large demographic of people that do not.” Dahl said. “Some of the sentiment that I have seen have talked about how Prop 3 is too confusing, or how abortion is murder.”

Metro Detroit felt differently about Prop 3. In Bloomfield Hills, a suburb 20 minutes away from Detroit, resident Avery Geller believed that Michiganders will vote “Yes” on Prop 3.

“Many of my friends back home and in the Michigan State community have seen an overwhelming amount of support for Prop 3.” Geller said. “When I go back home I see most of the signs say ‘Vote Yes.”

Geller’s observations were correct. Prop 3 won by a landslide in his community. In Oakland County 64% of the voters voted “Yes” compared to 36% voting “No”.”

Women were disturbed about the decision passed by the Supreme Court in June. Hannah Charlip, a Farmington Hills resident, was very upset with the decision.

“The most disappointing part is that men think they have the ability to make a life altering decision for a female. All of the work that so many important influential people fought for, for so long to instill in the country is now possibly being overturned,” Charlip said.

Prop 3 was also important to many families across Michigan. Dahl felt that laws regarding abortions are an attack on families.

“We need to protect not only the people that can give birth, but also the potential children that could be born in very hard situations,” Dahl said. “I was born in poverty, and I don’t believe that people should have to continue to go through that if it can be avoided with safe birth control.”

Some Michiganders believed that if Prop 3 didn’t pass, it would have been a way to take away women’s rights.

“It’s a major attack on women’s rights. No one should have the ability to make the decision except the woman, period. If the person does not have the means to raise a child, but is forced to [give] birth, the parent is putting the child at a disadvantage which is unfair too,” Charlip said.

Pre-election polls across Michigan consistently polled “Yes” to Prop 3. A poll conducted by a Detroit news station, Local 4, between October 26-28 concluded that 55% of Michiganders were in support, while 41% were not. Additionally, 3.8% of voters were undecided on Prop 3.

Polling was correct. The final results for Prop 3 was 56.2% “Yes” compared to 43.8% “No”. Abortions are now a constitutional right in Michigan.

Hi guys my name is Kenny Eaton! I'm a Senior with a concentration in Sports Journalism. I have a sports podcast called Motor Up Sports. I focus on Detroit sports, and Michigan/Michigan State. I also announce play by play basketball for Lansing Catholic High School.