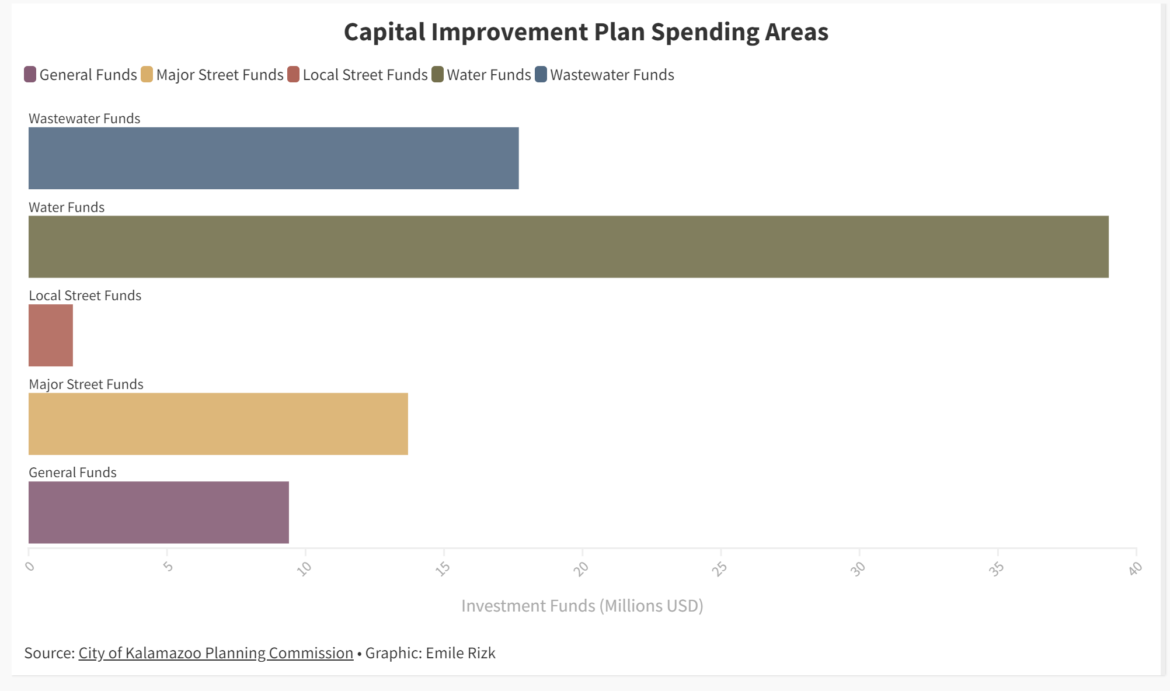 The capital improvement plan budgets for a broad range of areas, however a bulk of the funds go towards both water and wastewater funds.

Kalamazoo’s Public Services Director and City Engineer said the bulk of the Capital Improvement Plan is dedicated to maintaining and improving the groundwater-based and wastewater systems, an expenditure important to the city’s future.

“Investment in water and wastewater is historically, and will continue to be, orders of magnitudes greater than investment, say in streets or what we call our general fund,” said Baker. “The scope of those projects are tremendously greater than a park project or a street project or something like that.”

The Capital Improvement Plan will take place over the span of five years, with projects such as the north Kalamazoo lead service line replacements set to begin in April 2022 and is projected to finish in November 2023. .

Baker said, “Kalamazoo is committed to reducing our lead numbers, and the only way to do that is to replace our lead service lines.”

The Capital Improvement Plan allocates $15.3 million to improve major and local streets such as Stadium Drive, which goes through Western Michigan University.

“We’ve got a good team on that,” said Baker. “We think we can make that happen. We’re adding some non-motorized use — a shared use path — that would go from Howard street following Stadium drive and go toward the football stadium there to enhance pedestrian accessibility.”

In total, the plan budgets to repave or preserve for 33 local roads such as Parkeview, Miller Drive, and Paterson Bridge are mentioned. Baker said the city’s asset management plan focuses on the PASER rating of streets to determine which streets need attention.

“It’s great that the community is willing to invest in our market and that they see a need to increase food access.” said Katelyn Bekken-Simpson, manager of the Kalamazoo Farmers Market.  “We’ve been operating out of the same location since 1947 so as you can imagine it was pretty run down and needed quite a few updates throughout the years.”

“I’m looking forward to it. We had a meeting that kind of gave us an outline of what the changes were going to be and how everything was going to look and a timeline for these things,” said Collison, “I think they’re pretty positive over what they’re going to be trying to do so I’m pretty excited about seeing forward about what is going to happen.”

The Kalamazoo Farmers Market operated out of a different location in 2021 due to renovations, said Bekken-Simpson, and plans to open May 7.