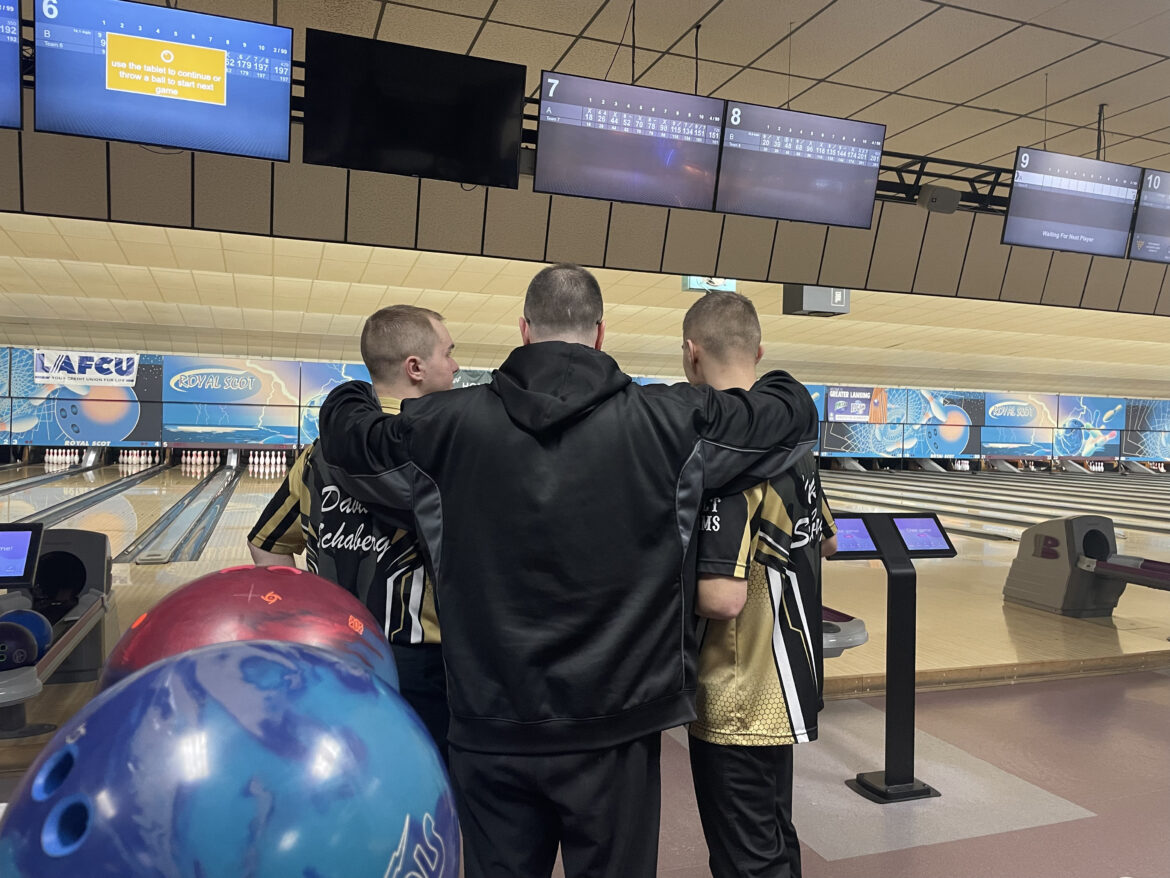 Scott Schaberg embraces his sons, David (17) and Nick (15), before the championship match at the CAAC singles tournament on Sunday at Royal Scot.

HOLT, Mich. – Even before the start of the Capital Area Athletics Conference singles championship bowling match, one thing was for sure– a Schaberg would win.

The Schaberg brothers have dominated the local high school bowling scene for the past few years with David, a senior, and Nick, a sophomore, leading the conference with  averages over 220 per game. It was clear that the brothers were the favorites to win the conference tournament, but no one knew which one it would be.

Nick Schaberg earned the tournament’s top seed in qualifying with his older brother in second, setting up a collision course for the championship match.

But the family roots don’t stop there in the Holt bowling program, as their father, Scott Schaberg, is in his first year coaching the team.

Nick Schaberg knew that with his dad at the helm, this season needed to be different. “Knowing that my dad’s the coach, I can’t act the same way as I did last year. I have to be very good at the mental game if I want to win.” Nick Schaberg said.

While Schaberg said seeing his sons’ success has been “wonderful,” these head-to-head matchups can be tough for the father. “Personally, I’m getting mixed emotions about the whole thing. I love all these kids. In these instances, watching them bowl against one another, it’s tough because they all want to win. It’s a wonderful feeling, but it’s mixed feelings.” Scott Schaberg said.

Holt stands in a tie for first at the top of the CAAC Red Division at 8-2.

“It’s been great. (Nick’s) a really good bowler, so just to have him on the team and for us to succeed together, it’s really cool.” David Schaberg said.

This year, David scored his first perfect game in high school competition, which was the eighth of his life and the 11th in CAAC history. He is coming up on breaking a decade-old school record for average score. But even with all of David’s success this season, it was sophomore Nick who came out with the conference singles title on Sunday at Royal Scot.

Both Schaberg brothers will be among the favorites to make a run at the Division 1 Regional Finals on Feb. 25-26 with David coming off a semifinal appearance in the state championship as a junior in 2021.

But on Sunday in the conference finals, it all came down to a family affair.

In moments like these, it can be hard to separate the parent from the coach. Scott Schaberg said that while it’s great to see the boys win a title, the one negative is “that it had to come at the expense of the other.”

I am a sports broadcasting student in the class of 2024. I love sports and bringing the stories of the game to the people. You can find my work at Impact89FM and on B1G+ as well as with the Tri-City Chili Peppers of the Coastal Plain League.