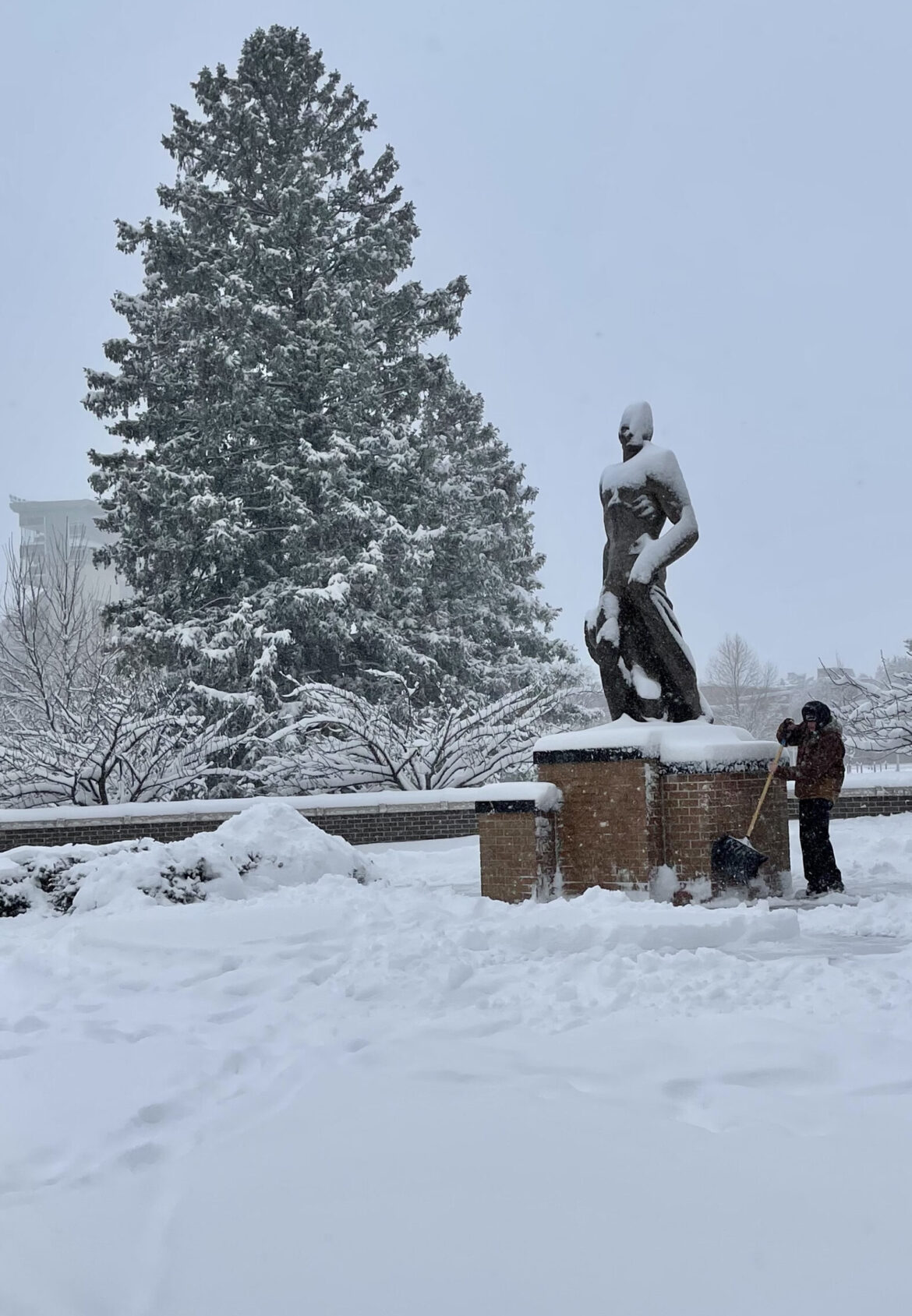 On Wednesday, after 13.3 inches of snow covered East Lansing, Garrett Daggett was busy plowing and salting the driveways of friends and neighbors around his home in Bath Township.

While working, Daggett came across several people who had gotten stuck in snowbanks and ditches while braving snow-covered roads. He knew the conditions were going to be bad and had prepared to help people with his full-size Chevy Silverado.

“That used to be me a couple years ago when I had a little tiny car and I was always getting stuck, so I’d rather save someone a couple hundred dollars from using a tow truck and just be able to help them out for free,” Daggett said. “I love driving and I love just helping people.”

On Michigan State University’s campus, many others were also clearing snow on the roads and walkways. Jackson Heon began his shift at 8 a.m. Three hours later, he was still hard at work, beginning to shovel the pavement and paths around the famous Spartan statue. A Michigan State student, Heon said that he was covering for other members of the snow removal team who had to attend class.

Despite the weather, the university did not cancel classes. MSU has historically been unlikely to suspend classes, only doing so seven times in the school’s history according to MSU Today. While many in-person lectures were pushed online, some students still went out into the snow to attend classes face to face. Collin Jones was one of those students, walking from his off-campus apartment to MSU’s STEM Teaching and Learning Center.

Although he had not been excited about getting to class, Jones said he “felt like in-person was definitely worth it” for his class.

Jones’ professor, Dr. Geoffrey Recktenwald, said he saw only about 60-70% of his students on Wednesday. He said he felt that the decision to cancel class was not his to make and he left it up to the university.

“I wish we had a snow day!” Recktenwald said.

The 13.3 inches of snow that fell Wednesday broke multiple single-day snowfall records for the area according to the National Weather Service, however it did not stop the hustle and bustle of mid-Michigan. With the help of those pulling cars and clearing paths, many East Lansing residents’ plans were detoured, but not deterred by the weather.

I am a Michigan State student in the class of 2024 pursuing a degree in Journalism with a concentration in Sports Reporting and a minor in Photography. I have a strong affinity for both print and visual media and I am looking forward to furthering my expertise in both as I continue my education! In the future I could see myself writing about or working for a professional sports organization.