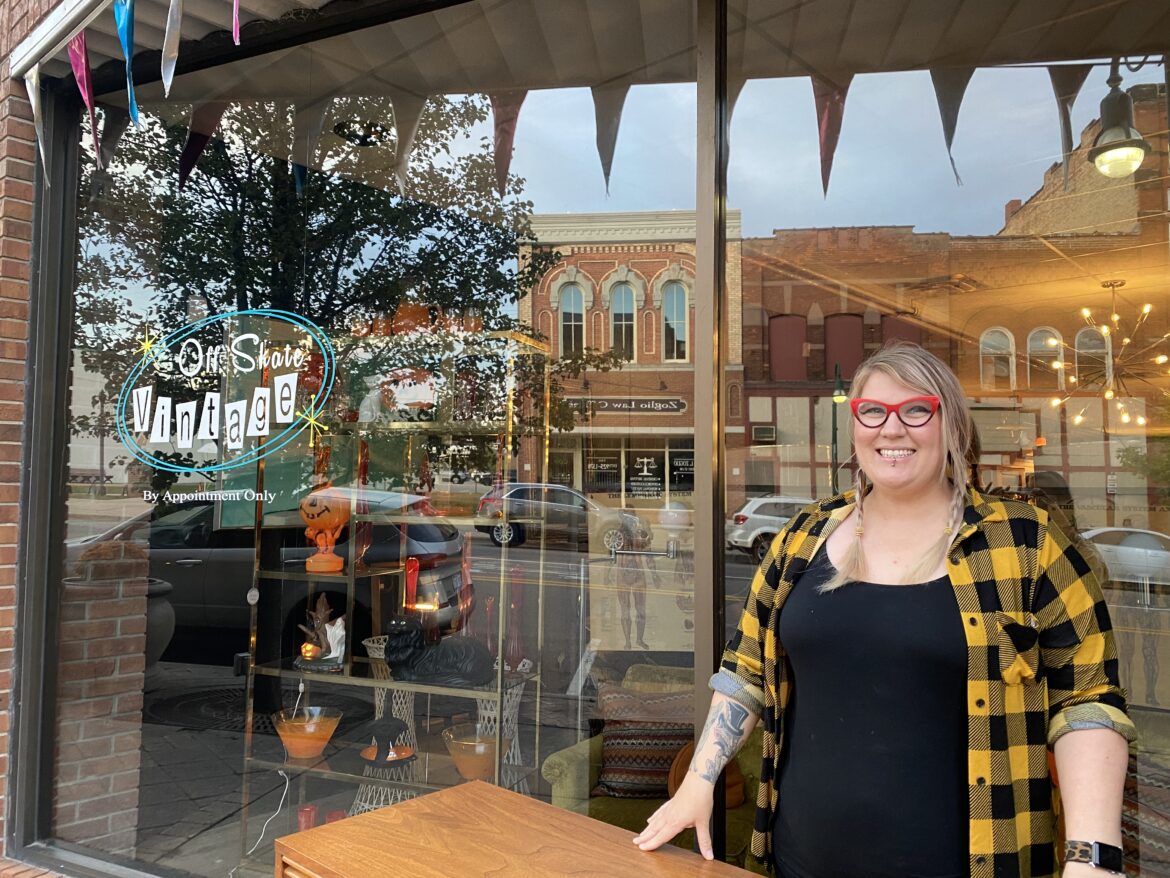 Carmen Weatherbee's downtown Grand Ledge shop, Off Skate Vintage, specializes in mid-century modern furniture. She said her style is inspired in part by a childhood love of the television series "Pee-wee's Playhouse."

As a child, Weatherbee used to watch the live-action television series and became obsessed with the retro, old-but-futuristic-style furniture and scenery used in the show. As she got older, she began going to garage sales and collecting antique furniture and art pieces that aligned with her liking of old things.

“It actually became quite the hoarding issue for a while, but as time went on and my partner and I had our first child, I needed to start making money,” said Weatherbee, who now runs Off Skate Vintage, an appointment-only retail shop on South Bridge Street in Grand Ledge.

Weatherbee said her next-door neighbor Ruth Creyts, who owns The Salvage Yard Antiques, told her she had talent and a great eye for high-quality antiques. Weatherbee said she spends most of her time searching for merchandise and sorting the great from the good.

“I’m always working and most of my work is sourcing,” she said. “Lately a lot of people contact me with things that they have for my shop. I mean I still do this, but more in the past I went to a lot of estate sales. The market has become so popular that the people there become very aggressive, but I guess it’s just a necessary evil.”

Off Skate Vintage specializes in mid-century modern furniture, which Weatherbee said has  come back into style. She said trends always repeat in fashion and then that transitions to furniture and home decor.

Postmodern style is trendy again now, she said, but to her it will always be a classic and won’t ever go completely out of style. She said the pieces she finds are also built better than newer furniture.

“These pieces have already lasted 60 years, and furniture today is only built to last two years,” Weatherbee said. “It’s quality over quantity for me. Some people will comment on my posts saying they can find a couch similar for way cheaper at say Art Van and I just have to laugh.”

Grand Ledge resident Kylee Pier said she often shops second-hand because it is better for the environment. She said she likes to bring older styles back and make them her new style.

“Department and chain stores don’t have the kind of stuff you can find second-hand,” Pier said. “I want my pieces to be unique. I’ve never really liked fast fashion and I think supporting local is important.”

Weatherbee said she doesn’t like to think of her store as used or thrifted but rather investment heirlooms. Her pieces were often owned by people who have passed or of older age and she sees the sentimental value.

“I see it as history and passing down someone’s story. I want to stop these pieces from ending up in a landfill. They are built to last, that’s the whole reason I do this,” Weatherbee said.

Customer Amanda Dean-Jarman said she found Off Skate Vintage when it was previously located in Marshall. She was recently shopping for furniture for her house that was built in 1975 and wanted to keep that style with mid-century furniture.

“Carmen is doing everything right,” Dean-Jarman said. “I have continued to follow her store on social media and referred several friends. She’s is super responsive on social media, and on top of being a mother she takes a lot of time to track this stuff down, It’s history, designer brands from the ’50s and ’60s, not to mention her prices are great.”

Dean-Jarman said it is hard to find these pieces in good condition. She said Weatherbee has a talent for seeing their value.

Weatherbee said she even has a customer from Tokyo who flies in twice a year to look at her stock. Weatherbee on average sells 10 pieces a week and overall almost 500 pieces of art and furniture a year. She said she works work 75 hours a week in addition to being is a mom and wife.

“I don’t think people realize the work that goes into this, from the sourcing, retrieving, cleaning, display and advertising,” Weatherbee said. “It’s a lot but I love doing it.”

Adriana is from Grand Rapids, Michigan and attends Michigan State University on track for law school. Her other interests include journalism and politics. She hopes to pursue a career in contract law or political journalism.