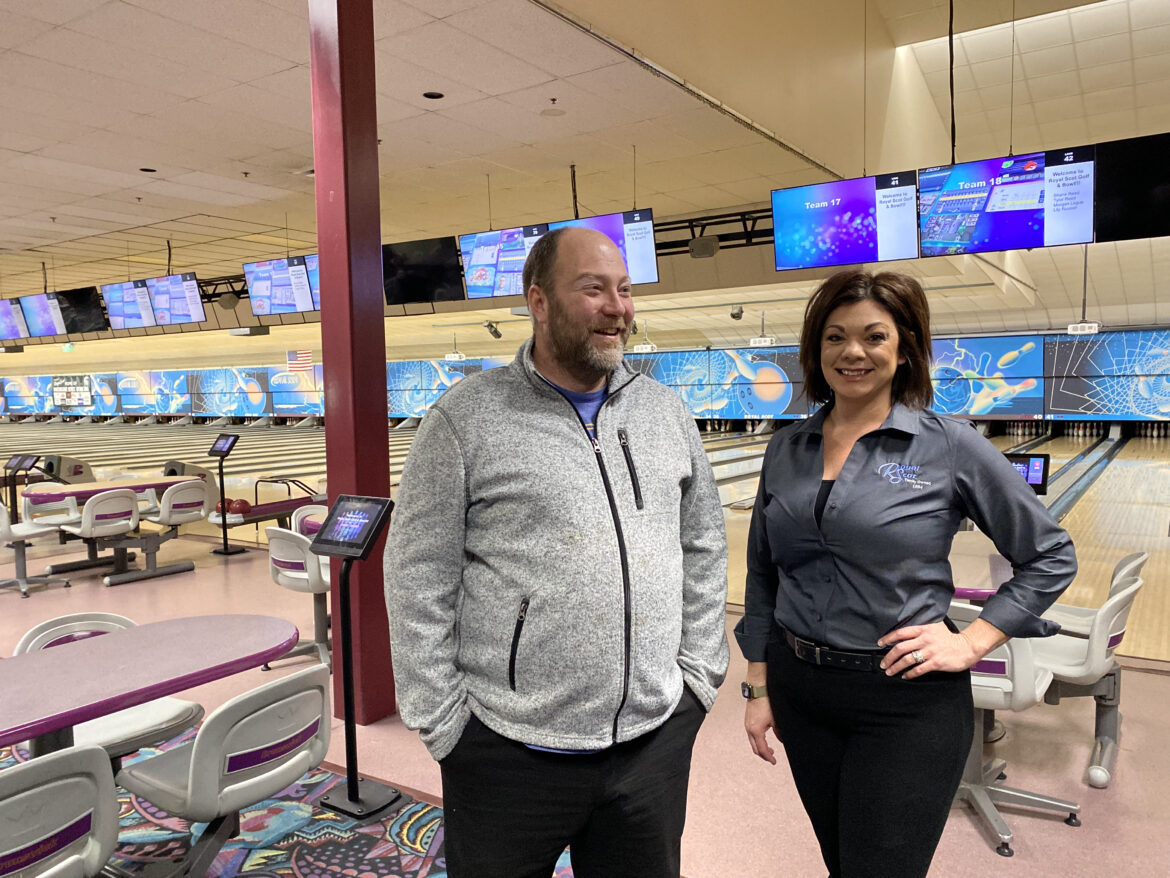 Chris Bowen (left) and Joanie Kilchermann (right) are part of the management team at Royal Scot. They said they have been working over 70 hours a week in the face of staffing shortages.

Joanie Kilchermann said her staff is being pushed to its limits.

Her staff shortage is not for lack of trying. Kilchermann said she’s attempted to use social media to lure in new employees. Royal Scot has also raised the starting hourly wage for waitstaff from $3.67 to $10. So far, it hasn’t worked.

“We haven’t been able to get staff,” Kilchermann said. “And when we do, they don’t last long because it’s so much work.”

Royal Scot Manager Chris Bowen said the business’s issues almost completely stem from a basic need for more employees. Prior to the pandemic, Royal Scot had double the employees working events as it has now. In March and April 2020, the business had to cut employees because they were not getting customers, like many other businesses early in the coronavirus pandemic. Now that business is picking up again, Bowen and Kilchermann are scrambling to find new hires.

“It’s not that we have tons of customers, but we have enough customers to survive and get through the pandemic,” Bowen said. “We just don’t have enough staff to actually take care of all of the customers. We have two waitresses and maybe one person running the counter, so it’s a huge problem here.”

Dubbed by many economists as the “Great Resignation,” the Bureau of Labor Statistics reported a record 4.4 million Americans, or about 3% of the workforce, quit in September. The industry with the highest quit rate was leisure and hospitality, with accommodation and food services businesses facing a quit rate of 6.6%.

Michigan State University economics professor Charles Ballard said the high quit rate is a sign of a strong economy and it means many workers recognize businesses are hiring.

“That puts upward pressure on wages and I think a lot of people are saying, ‘OK, I might be able to get better wages, better working conditions, better something at a different job,’” he said.

Ballard said the pandemic-related shutdown of many businesses also provided workers a chance to reassess what they wish to do with their lives.

“COVID disrupted things in a way that caused millions of workers to make a once-in-a-lifetime reassessment of their connection to the labor force,” he said.

Ballard said he believes burnout and treatment from customers plays a substantial role in the reason why many workers are choosing to leave food service and customer service.

“We’ve heard stories of airline passengers being rude or even disruptive about being asked to comply with federal regulations when flying. Lots of people who are in customer service. I’ve heard of burnout in health care,” he said. “So some people may make a change in their career, not necessarily going to better pay, but just to something that’s less stressful.”

Kilchermann said not having enough servers or cooks means longer wait times for food, and some guests take out their frustration on the ones who are there.

“They’re being mistreated by the customers so badly that these poor girls are driven to tears,” Kilchermann said. “Customers are not very forgiving with us being short-staffed.”

The toll is not just being paid in tears. Kilchermann said the Royal Scot’s supervisors are exhausted, and it has affected relationships with family members.

“Myself and the kitchen manager work over 70 hours a week,” Kilchermann said. “I have a 2-year-old, so it has been really hard — and my marriage is taking a beating because I am never home.”

Zyara Grill, a Mediterranean restaurant in East Lansing, opened this summer. Cashier David Esa has been with the business since its opening and recalls pulling 12-to-16 hour shifts daily due to lack of workers.

“We’re hoping to find a lot of people to work, but we just couldn’t find it,” Esa said.

Esa said nearly every other restaurant in East Lansing was facing the same challenges, with workers pulling the same grueling shifts.

Some businesses have fared better when it comes to staff numbers, but have found employees have more boundaries and different standards after the pandemic.

“When they come in, they’re ready and they have their boundaries ready,” Mackie said. “They’re set and they don’t want to be crossed.”

She said Sleepwalker has adapted to ensure these boundaries are accepted.

“We really try to work hard on that here,” Mackie said. “To give everyone the time they need off and work them as much as they want.”

Stephagios said she hasn’t had a drastic drop in staff, but the shortage has had noticeable effects on its customers. Folino said the extra stress of working in understaffed environments has led to customers not coming in as frequently.

“People that are working are impacted by the labor shortage because they have to take on heavier workloads,” Folino said, “which gives them less time to receive beauty services.”

Drew Goretzka is a native of Portage, Michigan, and came to Michigan State University in 2019. His journalistic interests include international correspondence and investigative journalism. His reporting has appeared in The State News and Study Breaks Magazine.