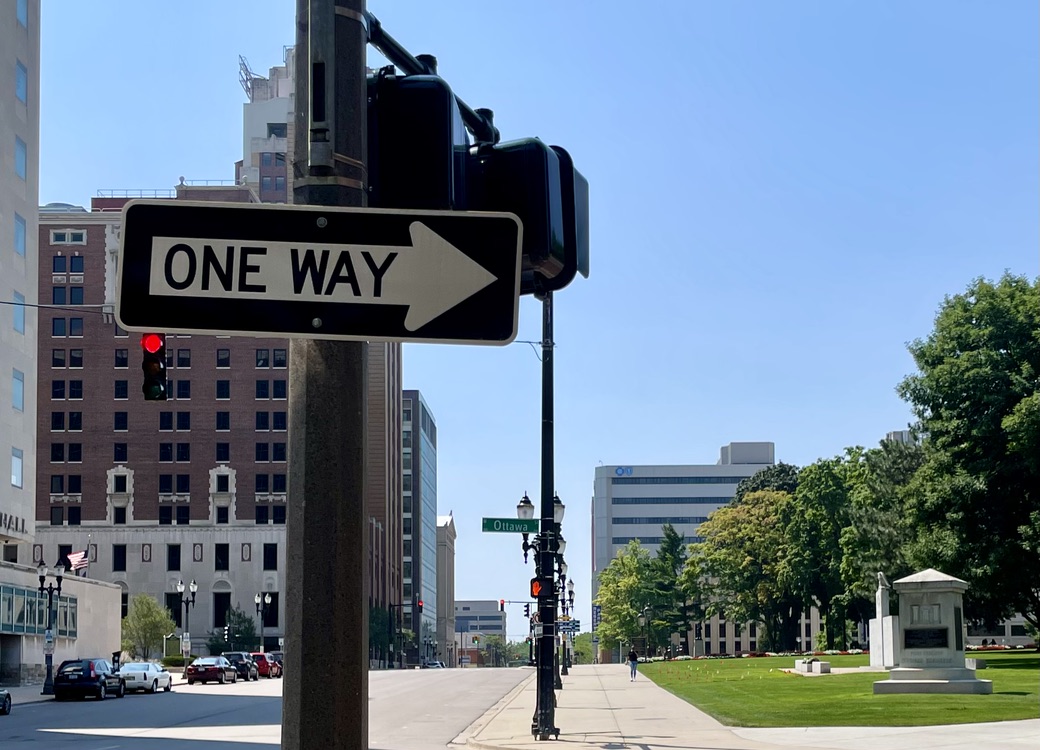 One-way streets are soon to be a thing of the past in Lansing. Photo by Gabrielle Morton.

“It will definitely make things less confusing for those not familiar with downtown,” said Kilpatrick. “Generally, there is a positive correlation between two-way traffic and retail businesses and the economics of the area.”

After COVID-19 pushed back many meetings regarding the street conversion, the city finally was able to start the informational campaign this spring. This campaign was done in order to inform business owners, employees, CATA users, and residents about what changes are to come.

On July 15, Lansing held its first of two informational meetings. The meeting was held to start a conversation with the community about the conversion and hear the public’s comments and concerns. Will Hartwick, a Lansing Community College student, is among those who said he was excited about the change.

“Having easier access to campus is something I am looking forward to,” said Hartwick. “I am a bit worried about parking, as finding places to park will become more challenging with the increased traffic through the streets.”

The project is located on these streets:  Capital and Grand, Ottawa and Allegan, and Pine and Walnut. Kilpatrick said the majority of the funding for the construction is going toward changing the traffic signals.

The city is hoping that these changes will increase accessibility to businesses and residential properties, make travel more direct for emergency responders, and provide simpler routing for those visiting. But at least one business owner is concerned about the immediate impact. Joanna Liu, an employee at Anqi Sushi Express located on Allegan St., said that she is worried about how construction will affect business.

“If the construction is finished quickly, I don’t have a problem with the conversion considering students will be coming back soon,” said Liu. “I will be happy to see the change because our restaurant can be hard to find due to the one way.”

The project is still working on the exact dates and order of which streets will be under construction. Kilpatrick said that they will be starting some north and south streets this fall to allow for detour routes the following summer. Ottawa and Allegan construction date schedule is still pending.

The next informational meeting regarding the one-way to two-way construction will be held on Aug. 12, in the Lansing City Hall from 4 p.m. to 6 p.m. This meeting will be held in an effort to educate the Lansing community on the change and encourage the public to voice their concerns moving forward.