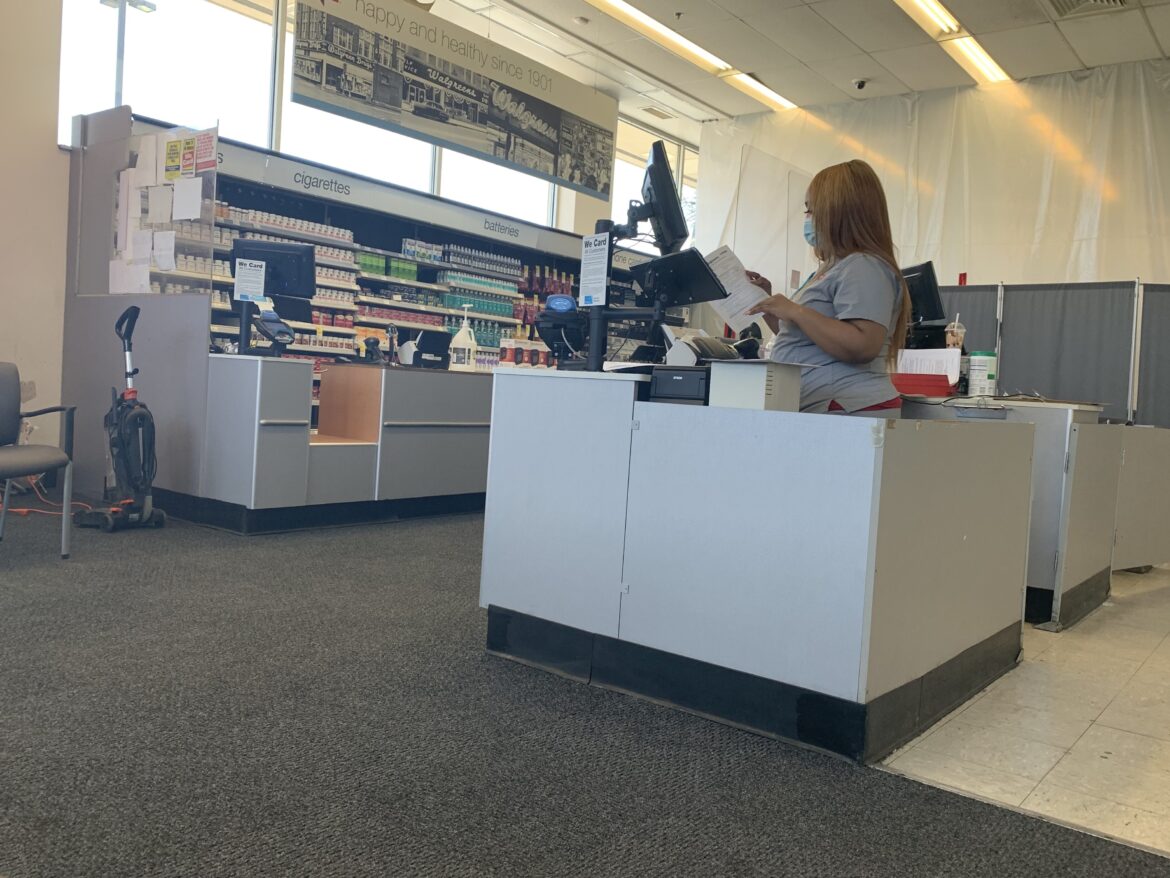 The Walgreens at 10300 S Michigan Ave has transformed from a pharmacy store to a vaccine distribution center.

As vaccination rates have improved over recent weeks, many essential workers in Chicago are getting their opportunity to protect themselves from COVID-19. The city is currently in Phase 1B Plus of its vaccine rollout plan, meaning only residents 65 and older, essential front-line workers, and those 16 and up with underlying conditions are eligible to receive a dose.

Illinois, like many other states, had trouble with the rollout at first, resulting in large discrepancies in vaccine administration by race and income, especially in its largest city.

According to the City of Chicago’s website, during its first week of vaccinations, only 18% of the total doses administered were given to Black and Latino citizens, who together make up 59% of Chicago’s population. As of March 28, the city has brought that number up to 54.6% but still has work to do considering that minority communities have been disproportionately affected by the coronavirus pandemic. Over 3,700 local Black and Latino residents have died from COVID-19, over three times the amount of white Chicagoans who have died due to the virus.

As of March 27, Illinois has given out 78.95% of the doses they have received, which ranks 23rd among U.S. states. About a month ago, that number was 71.99%, placing Illinois at 40th in the nation. Chicago hit 2 million doses administered in the last week of March, but positivity rates also topped 3% for the first time since early February, possibly due to a St. Patrick’s Day surge.

Vanessa Jasek, a behavior analyst who works with special needs children, received her second dose of the Moderna vaccine in February.

“It was seamless. I got there, got in and out, and we only had to wait about 20 minutes,” Jasek said. “They made us stay 15 minutes afterward just to make sure there weren’t any reactions.”

Jasek was somewhat apprehensive about getting the vaccine.

“I’m not an anti-vaxxer, but I definitely value research, and I didn’t think there was enough research,” she said. “I felt like I was kind of a guinea pig, but I’m glad I got it.”

There are now three vaccines that have been approved for emergency use by the U.S. Food and Drug Administration: Moderna, Pfizer, and Johnson & Johnson. All three have been deemed “safe and effective” by the Centers for Disease Control and Prevention, and each has undergone rigorous testing for safety and effectiveness. Reported side effects include headaches, dizziness, fatigue, and swelling around the injection area.

“I didn’t have any negative side effects from either one,” said Steve Seeger, a U.S. district judge for the Northern District of Illinois. “The first one felt like someone slugged me in the arm for about a day and the second one, I didn’t feel a thing.”

Roseland Community Hospital, a vaccination distribution center on the South Side, teamed up with the Northern Illinois District Court to vaccinate all of the judges, including Seeger.

“I felt fortunate. I felt blessed. I felt a smidge of guilt because other people can’t have it,” he said. “Truthfully, I don’t view myself as deserving of the vaccine yet. I wish my wife could get it instead of me. But it wasn’t offered to my wife, it was offered to me, and I thought it would be reckless not to take it.”

Even as the state continues to vaccinate more people every day, the sense of safety the vaccine is bringing to its hosts varies across the board.

“I feel like I’m protected,” said Jasek, who deals with clients face-to-face on a regular basis. “I feel safer going out and being exposed to everybody.”

Seeger, however, hasn’t changed his behavior at all since getting the vaccine.

“I still double mask and limit my interactions with people,” said Seeger. “I have seatbelts in my car now; I can’t just go driving recklessly.”

As of March 27, Chicago has managed to give a first dose of the vaccine to 26.7% of its residents and a completed vaccination series to 13.7% of Chicagoans, which is both a signal of progress and a reminder that there’s still a long road ahead in the fight against the coronavirus. The city planned to begin Phase 1C of the rollout on March 29, which adds more essential labor fields and underlying conditions to the eligibility list.

President Joe Biden hopes to make all American adults eligible for the vaccine by May 1, the same day the city is planning on starting Phase 2, which includes all residents above the age of 16.

Carter Frye is a sophomore journalism major with a sports minor at Michigan State University. He is passionate about basketball, baseball, football, and digging for the important stories in sports that are happening off-the-field. Carter is currently a part of the Spartan Sports Podcast, a weekly roundtable discussion with other MSU students about all things sports. He was also an editor for his high school newspaper, the Blueprint, at Jones College Prep in Chicago, IL.