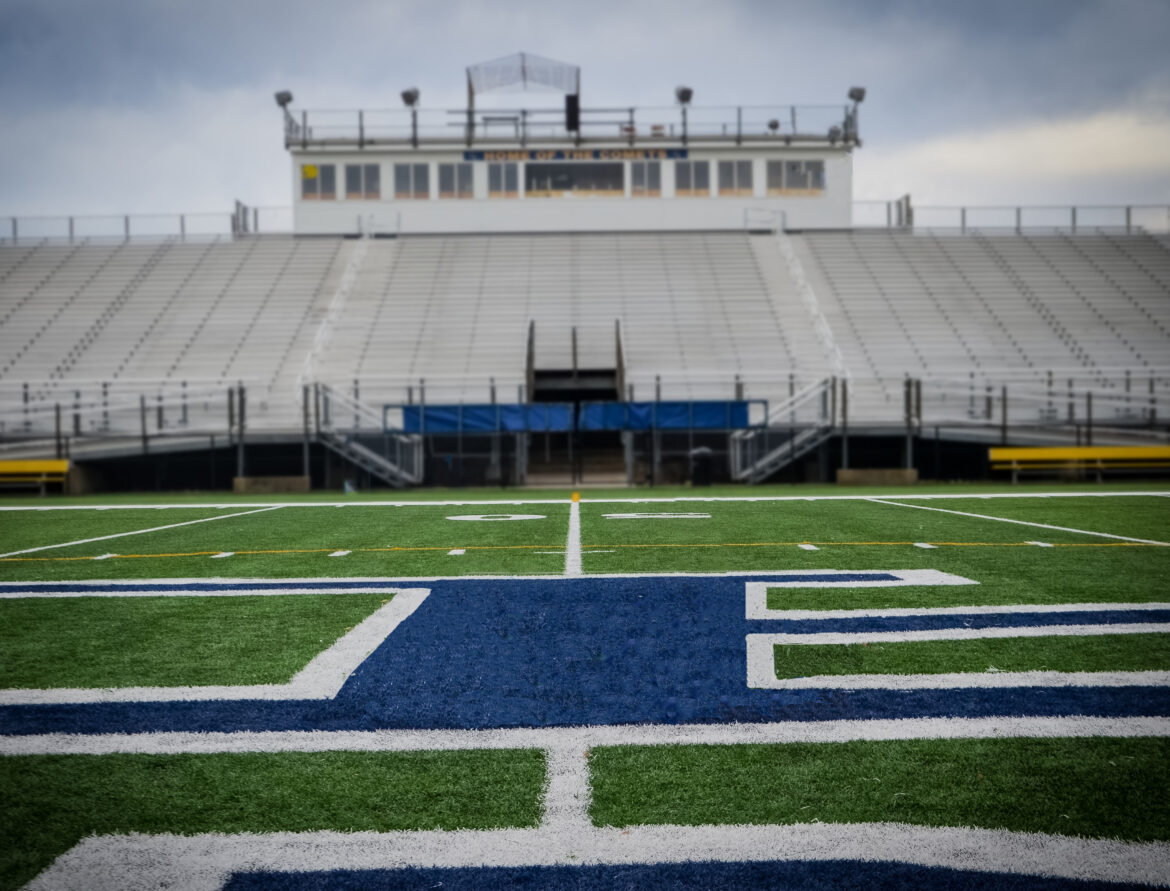 View from the field of the Grand Ledge football stadium after a season like no other.

GRAND LEDGE – The continuing COVID-19 pandemic led to a season like no other for the Grand Ledge varsity football team.

Grand Ledge Public School District classes have been held remotely since the start of the year in August. Sports, on the other hand, have been allowed to play with some accommodations. Although the Grand Ledge football season was delayed, the season still gave them enough time to play each game that was scheduled.

Head coach Joe Brya had to make it work even with the virus. The restrictions that were set in place to keep the team safe included temperatures readings, social distancing, facial coverings for all, and sanitation for both the players and equipment.

Brya said these precautions allowed the team to do well – the team finished 5-3, 2-2 in its conference – and avoid the coronavirus.

The students did their due diligence by wearing masks and sanitizing before touching equipment and never got infected or had to get tested because of exposure. The coronavirus has infected about 600,000 people and has taken a little over 15,000 lives in Michigan, according to the State of Michigan.

With extra safety comes complications in game play. In the beginning, temperature readings and mask wearing were a little weird, the players said.

“The obscured vision and trouble breathing were a side effect from wearing the mask,” senior wide receiver Emery Mills said.

The coronavirus was not a fear of Mills during the season. He knew all of the players, coaches, and staff were under tight watch when they were in and out of the stadium.

To keep within the Michigan High School Athletic Association (MHSAA), protocols there was no student section or band allowed, but the team found other ways to stay motivated for their Friday night games.

“All of the guys would come together and hype each other up and we never let each other get down for any mistakes,” said Mills.

Furthermore, parents of players just wanted to give them a chance to play.

“I wasn’t too worried about him catching the virus because they were having workouts and practices for months before,” said Tina Lowell, parent of junior linebacker Preston Lowell. She added that her family “wanted some sort of normalcy back.”

There were struggles on and off the field in September until the playoffs in November. Since the Grand Ledge Public Schools were fully remote, the varsity team had to be split up to view any film, which wasn’t ideal to learn as a team.

Along with the challenges, the Grand Ledge Football Boosters Board of Directors takes care of the finances, scheduling and hosting events.

Board President Sandy Reynolds said only two tickets per player were allowed and there were no concessions or game program that local businesses could donate to. Limiting these activities not only took away from the excitement of the game but also put the program in “financial strain,” Reynolds said.

The highlight of the season, Brya said, is that they got to play at all, which was important for seniors with their last chance to shine for college recruits.

“Overall, having the team come together everyday was a feeling of normalcy,” Mills said.

Madison Stoddard is a journalism major with a minor in sports journalism at Michigan State University. Stoddard has a deep interest in sports reporting as she was an athlete herself. She hopes to become a sports sideline reporter for ESPN someday.