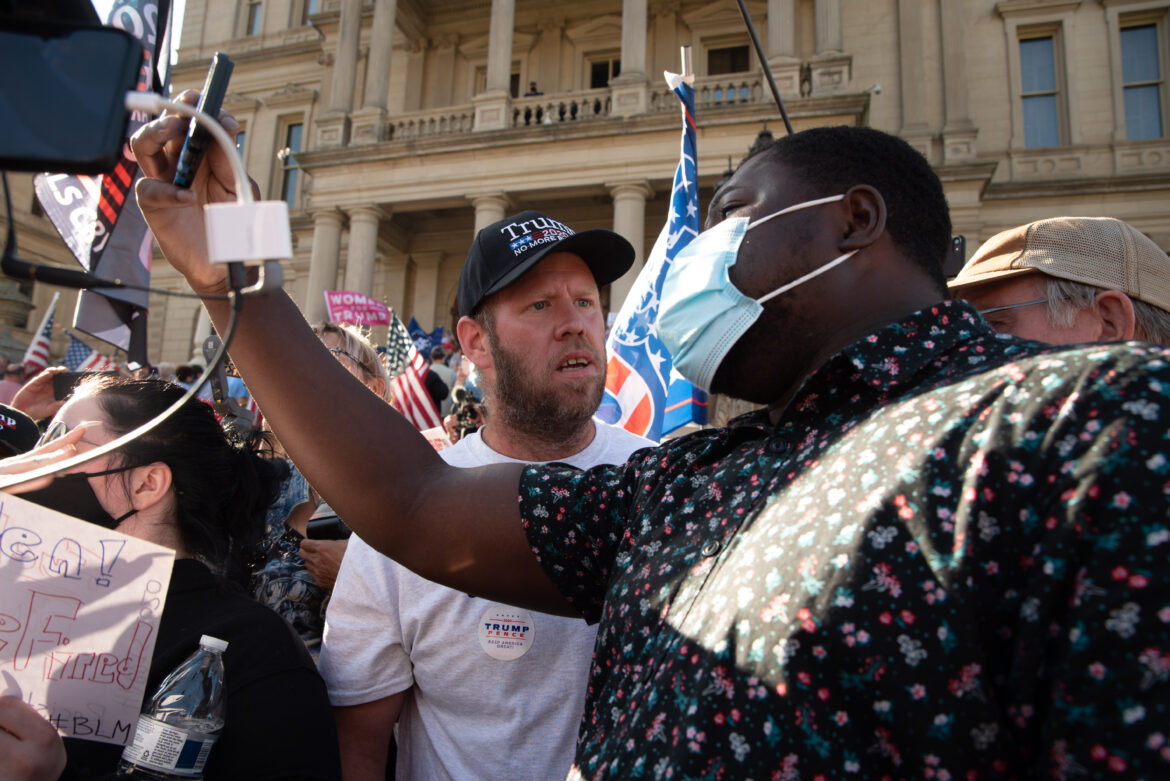 A supporter of President Donald Trump argues with a Black Lives Matter protestor wearing a face mask at the state Capitol on Nov. 14. Trump supporters were rallying to protest the results of the presidential election, which Trump lost.

Jason Relyea stood on the lawn of the state Capitol holding a camera in one hand and an AR-15 rifle slung over his shoulder.

Relyea was part of a protest in November that brought hundreds of people from across the state to Lansing to voice their frustrations with the election process. Protesters alleged fraud and other irregularities cost President Donald Trump the election, although state and federal courts to date have rejected those claims as inaccurate or not credible.

Supporters who arrived at the event armed with semi-automatic rifles at the request of event organizers said they were armed to “protect their freedom of speech” from organizations like Black Lives Matter and antifa, who attendees cited as responsible for altercations in the past.

Some Lansing residents and elected officials consider wielding weapons during a protest a form of intimidation, adding to the tensions seen at the Capitol during the past year over the state response to COVID-19 and now the election. But protesters like Relyea say there is a false impression of their motives.

Because of those misperceptions, Relyea felt it was important to livestream the event.

“That way the general public can see,” Relyea said. “Especially with the stigma we carry, that we aren’t all racist, we aren’t violent, we are a good group of people and that we stay very quiet and are very peaceful.”

‘In support of free and open political debate’

The protest, however, was not without tense moments. When a passerby on a bike stopped to debate the outcome of the election with protesters, a flurry of radio chatter could be heard and several armed members protesters moved closer. Police put themselves between the passerby and the growing crowd.

Still, Trump supporters like Nathan, who preferred not to give his last name because he feared possible harassment over social media, claimed they were only there to “keep the peace.”

“If people who have different viewpoints want to express themselves then I’m totally fine with that,” Nathan said. “The Second Amendment protects the First, so we are exercising that, and we are in support of free and open political debate.”

Nathan could be seen walking along the perimeter of the Capitol grounds during the event holding an AK-style rifle while wearing a camouflage hunting jacket.

Controversy around the results of the presidential election in Michigan and other swing states has only added fuel to the fire. Despite important states like Michigan and Georgia certifying their election outcomes in favor of President-elect Joe Biden, many Trump supporters still have a lot of questions.

“If that means that Joe Biden won, that’s fine, that’s the will of the people,” Nathan said. “But I think we need to investigate any irregularities or any potential fraud, just for all of us as a country.”

Claims of fraud or a rigged election have been rejected by state and federal courts, as well as elections officials. The Elections Infrastructure Government Coordinating Council and the Election Infrastructure Sector Coordinating Executive Committees released a joint statement on Nov. 12 calling the election “the most secure in American history.”

Jay Stap from Allegan, Michigan, said he believes in free and fair elections. But also said the number of accusations of irregularities have left a knot in his stomach.

Despite the views of these protesters, local county clerks say they have confidence in Michigan’s election system.

In the area surrounding Lansing, Trump won Clinton and Eaton counties. Each county’s respective county clerk said they were confident in the security of their elections.

Eaton County Clerk Diana Bosworth said one reason she is so confident is that elections are decentralized. There are numerous governing bodies involved in the election: the state Bureau of Elections, county clerks and county boards of canvassers. Local township and city clerks are the people who actually polling locations.

“They are the unsung heroes of Michigan elections,” Bosworth said.

Eaton County typically has about 500 precinct inspectors —evenly balanced between Democrat and Republican — who ensure elections are not skewed toward a particular party. Bosworth said her office had been preparing for the election the whole year.

“It was a long year of details and planning and hard work,” Bosworth said. “I would hate to have people feel like their vote didn’t count. So I hope that whatever work we have to do in the coming years to reassure people, I hope we can do.”

Clinton County Clerk Diane Zuker said she held 25 training sessions for the November election and was in constant communication with local city and township clerks.

Questions still remain among skeptics who point to voting machines as a possible point of vulnerability in the election process. There have been unverified claims that ballots were sent to foreign countries to be counted or that Internet malware may have been used to distort counting.

Courts and local election officials have rejected those claims, but protesters at the November rally at Michigan’s Capitol remained concerned.

“The machines were made to be exploited,” Stap said. “I’m not a programmer, so I can’t get into specifics, but I work with people that are and they all say it would be pretty easy to do. It’s just as easy as opening up an email.”

Zuker said there are many checks that happen on Election Day after the polls close at 8 p.m. Receiving boards review the records on election night before they are turned in, the county Board of Canvassers reviews the records again in the days following the election and the county conducts a post-election audit of the precincts.

Given all the work that goes into putting on a secure election, Zuker said it’s hard to see so many Michiganders not trust the process.

Bosworth said those who are skeptical should get to know their city and township clerks, and get involved in their local elections.

“People really need to go to the source of election administration for the correct information,” Bosworth said.

Grebner, a Democrat, said that Trump supporters, and Republicans in general, look a lot different than they would have 50 years ago. He said the demographics of both parties are in transition right now — with Democrats losing white working-class voters while Republicans lose the upper middle class.

“The two parties have really redefined themselves, and they have been moving in that direction for a long time,” Grebner said. “And Trump crystallized it, (he) precipitated a move that accelerated that transition.”

Grebner said Trump-era Republicans have been unwilling to challenge untruthful statements by the president and his supporters.

“It may sound good, but you’re going to discover that if people don’t accept truth as a fundamental principle, it’s really hard to have sensible discussions,” Grebner said. “You pretty quickly find that the people you’ve collected can’t be trusted. They’re just going to discover that over time, bless their hearts.”

Some Trump supporters agree that the Republican Party is undergoing a shift. Stap, a frequent attendee of political rallies at the Capitol in the past year, said he is not sure what the future of the party after Trump may be, but he is interested to find out.

“If I’m being honest, Donald Trump is the only candidate for any office — at any level — where I felt like he had my back, period,” Stap said. “A lot of that has to do with his ‘America First’ strategy, his safety through strength rhetoric and his total willingness to stand up to anything, both foreign and domestic.”

Stap said that he felt like the Republican Party pushed Trump supporters to the wayside, without realizing how many of them there were. He said this makes Stap feel conflicted when voting for other Republican candidates.

“The worst you can do is vote them (establishment Republicans) out, and if the elections are rigged you can’t do that anyway,” Stap said. “Part of me thinks the elections might just be rigged permanently.”

The Clinton and Eaton clerks acknowledged that tensions from this election could leave permanent scars on the process, but Zuker said she is hopeful that positive changes will be made to give clerks’ offices more time to prepare ballots.

“I think you’re going to see a lot more participation by voters in the future,” said Zuker, of Clinton County. “But I also think that there’s going to be some legislative changes to make things even better than they are now in coming months and years maybe; hopefully before the next election cycle.”

Di'Amond Moore is a junior studying journalism with a minor in media photography at Michigan State University. She is interested in visually telling the stories of people directly impacted by the decisions of all levels of government.

Nicholas Simon is a multimedia reporter from South Haven, Michigan. His areas of interest include international relations, commercial spaceflight, ecology, and globalization. He has covered events for both print and broadcast outlets ranging from protests to presidential debates and currently covers the Grand Ledge community for the Spartan Newsroom.

Hope O’Dell is from Midland, Michigan, and came to Michigan State University in 2018, where she majored in journalism and Social Relations & Policy. Her journalistic interests include investigative and political reporting. In addition to the Spartan Newsroom, her reporting has appeared in the Red Cedar Log, the Grand Haven Tribune and the Midland Daily News.