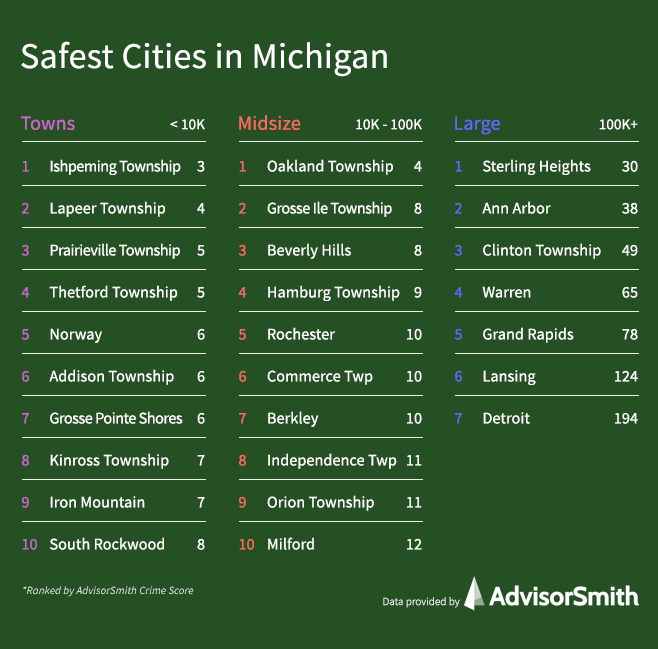 The safest small, midsize and large communities in Michigan, based on 2018 FBI Uniform Crime Reports.

If so, check out the Upper Peninsula, which has more of Michigan’s 10 safest small communities than any other part of the state.

Among communities with 10,000 or fewer residents, Ishpeming Township had the lowest rate of reported crime, according to an analysis by New York City-based research firm AdvisorSmith. Three other UP communities made the top 10 list as well – Norway, Kinross Township and Iron Mountain.

That’s because the accuracy of the underlying data is far from certain, said Robert Stevenson, the executive director of the Michigan Association of Chiefs of Police.

The study by AdvisorSmith, which researches topics of interest to business owners and entrepreneurs, with a special focus on insurance, compared violent and property crimes per 1,000 residents. It used the FBI’s 2018 Uniform Crime Reports which rely on data reported by municipal, state, tribal and federal law enforcement agencies.

The figures include violent crimes such as murders, rapes, robberies and assaults, and property crimes such as burglaries, larcenies and vehicle thefts, the study said.

Cpl. Kenneth Hardy, the acting police chief on Mackinac Island, said the analysis is skewed because the island’s permanent population of about 500 jumps to 14,000 to 20,000 tourists a day from late spring to early fall.

Visitors are responsible for most of the crimes, he said.

“We go from being one of the smallest in the U.P. to the third-largest in the summer,” Hardy said.

Mackinac Island hasn’t had a homicide since about 1960 – it’s still unsolved – and had three sexual assaults reported in 2018, Hardy said. Stolen bicycles account for the majority of reported property crimes. There’s an occasional breaking and entering, quite a few shoplifting cases – mostly by tourists – and some domestic assaults, also mostly involving tourists, he said.

The department has a chief, five full-time officers and three to four seasonal offices. Two State Police troopers are assigned to the island from mid-May to mid-September.

Stevenson said FBI crime reports have long been recognized as flawed as far as the amount of crime because they tally only offenses reported to police, not the total that occur.

Some categories such as burglaries, thefts from motor vehicles and sexual assaults, are underreported, and in some cases, Stevenson said, “maybe people figure police will never catch anybody”.

He also said that an anomalous year can distort the figures, especially for a small or midsize community – for example, one that usually has zero or one homicides annually on average but has a half-dozen in an aberrational year.

To illustrate, Livonia typically had one or two homicides a year, mostly involving family or friends rather than strangers, said Stevenson, the city’s former police chief. Then “one year we had seven. The next year, our homicide rate went up 700%. It skews the reports.”

Adrian Mak, AdvisorSmith’s chief executive officer, said, “It is true that there may be variances in the collection of reported crime between different agencies, as well as societal factors such as varying levels of trust in law enforcement in different communities that impact the willingness of citizens to report crime.”

Mak said the data his firm analyzed “reflects what actually happened with a city’s reported crime over the course of a year. The safety of cities can and does change over time, so we update the data accordingly when it is available.

“However, alternative methods of measuring safety, such as the National Crime Victimization Survey, also suffer from shortcomings, such as not measuring homicides or crimes against businesses,” he said.

As for Mackinac Island’s abysmal ranking, Mak said the study analyzed the number of reported property and violent crimes based on the island’s year-round population.

“Unfortunately, reliable estimates of daytime visitors or non-permanent population of cities are not widely available in a format that is suitable for comparison,” he said.

Among midsize communities with 10,000 to 100,000 residents, two of the safest 10 are in Livingston and Wayne counties: Hamburg Township and Grosse Ile Township.

Muskegon Heights ranks at the bottom among 130 midsize communities.

Among the state’s 10 largest cities with 100,000 or more residents, the study ranked Sterling Heights as safest and Detroit as least-safe.

Stevenson said, “These statistics are already a huge thorn in everybody’s side. They can say whatever people want them to say. They’re interesting. They create a lot of conversation, but statistically they’re flawed.”

Michigan will use a new national crime reporting system next year that collects more data, including whether there was an offender-victim relationship and whether police made an arrest, he said.