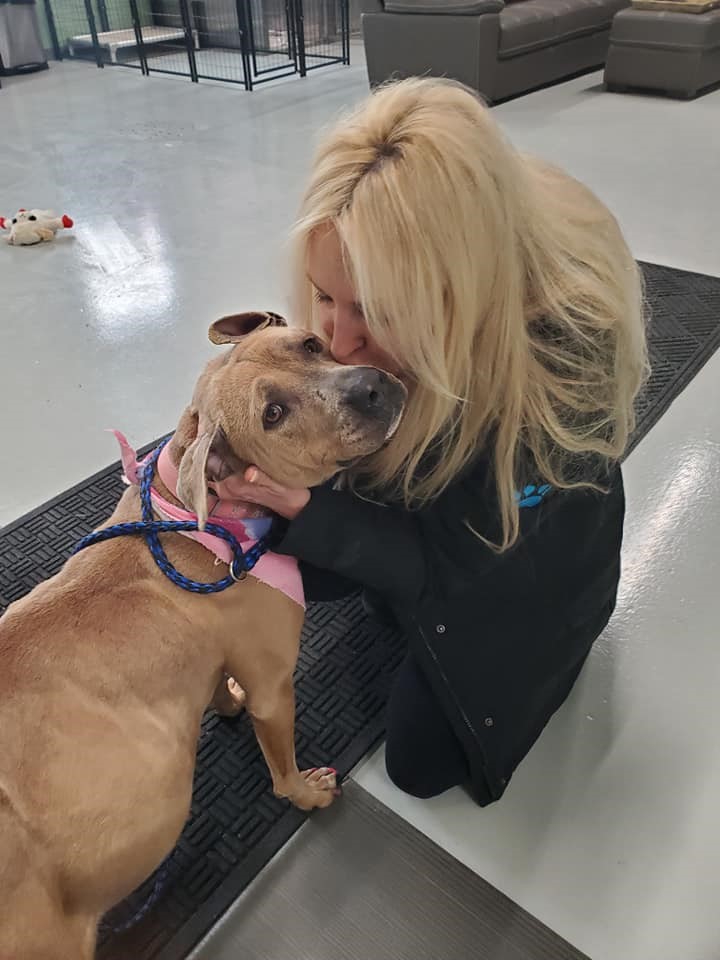 A battered, malnourished puppy was roaming the dark street when contractor Billy Koresky drove up that early morning in 2012 for his latest job.

Koresky and the workers from his demolition company were there to take down the last abandoned house on a block off Interstate 94 near Cadieux Road in northeast Detroit.

The dirty, brown and white puppy, whose eye was so bloodshot that the white in it was almost unrecognizable, joined the throng of workers greeting Koresky.

“It looked like they (had) used him for bait,” Koresky, 58, said of the young pit bull mix. “I gave him food in the morning and then I gave him water.”

At the end of a roughly nine-hour shift, Koresky, who has since retired from the demolition business, said the dog apparently was ready to say goodbye to him.

“He just jumped in the truck and I took him to my shop, and then Rachael saw him,” the Harrison Township resident said, referring to his now wife.

Rachael Koresky, a retired graphic designer, said she knew the puppy was theirs on sight. They immediately took the puppy to a veterinarian.

“His paw, the skin was actually detached from the bone,” said Rachael Koresky, 54. “The vet said, if we didn’t find him, he would have died from infection.”

The puppy joined their small family and was soon named Abel Koresky.

As Billy Koresky returned to work sites, he would find more dogs like Abel on the streets of Detroit.

“We find the worst of the worst. Ones that are hurt, ones that are starved to death,” he said. “No one would take them, but the Pit Crew, they were the only ones that helped out.”

That crew was the Detroit Pit Crew Dog Rescue, a nonprofit that serves as an emergency street crew that rescues abandoned dogs, and sometimes other animals, all in critical condition, said Theresa Sumpter, founder of the rescue.

“We pick up stray dogs off the streets of Detroit that are severely injured or sick,” said Sumpter, 50.

Rachel Koresky would eventually join the campaign trying to save dogs she found while driving through Detroit on her days off.

“I would vet them, get them bathed, (and) groomed them,” she said. “I’d pay for their boarding or my mom would watch the dog, and then I’d find the dog a home.”

In the process, she formed a friendship with Sumpter. And upon retirement that friendship turned into a partnership when Rachel Koresky joined the Pit Crew in December 2018 as a member of its executive board.

In that role, Koresky joined a group whose mission is to find and disperse funds to operate the Centerline based-nonprofit, whose main focus is Detroit with outreach into Eastpointe and Highland Park.

The majority of the organization’s funding comes through Facebook donations and other events throughout the year. The money goes to the rescued dogs’ vet bills, Sumpter said.

“Our veterinary bills this year have run about $12,000 a month,” said Sumpter, who owns four rescue dogs.

Once a dog has been rescued and recovers from its injuries, the animal will be taken to one of the nonprofit’s 10 foster care homes or to one of the Pit Crew’s 20 partner organizations. The dog is kept in that facility until adopted. Sumpter said about 450 dogs are rescued each year.

Eric McCombs, a member of the crew’s six-member executive board, said the opportunities the Pit Crew gives the animals is what made him want to get involved.

“The most rewarding part of the Pit Crew is seeing the transformation of the dogs,” said McCombs, a Detroit police officer. “My mom adopted one. My sister adopted another one.
And one of my other buddies, he adopted one.”

The rescued dogs become some of the biggest conversation starters — and ambassadors for the crew’s efforts — when they’re taken out in public, board members said.

“Everybody sees Abel,” Rachel Koresky said, while describing the plight of the rescued animals that she said have been mistreated, abused, neglected and starved to become fighting dogs. “People want to adopt them.”

“They turn out to be the best dogs,” she said.

Currently an MSU Senior pursuing a Bachelors degree in journalism with a minor in broadcasting. Katie is also a reporting intern for HOMTV in Meridian Township and is the MSU Street Teams student coordinator. She was born and raised in Macomb, Michigan but loves to internationally frequently.