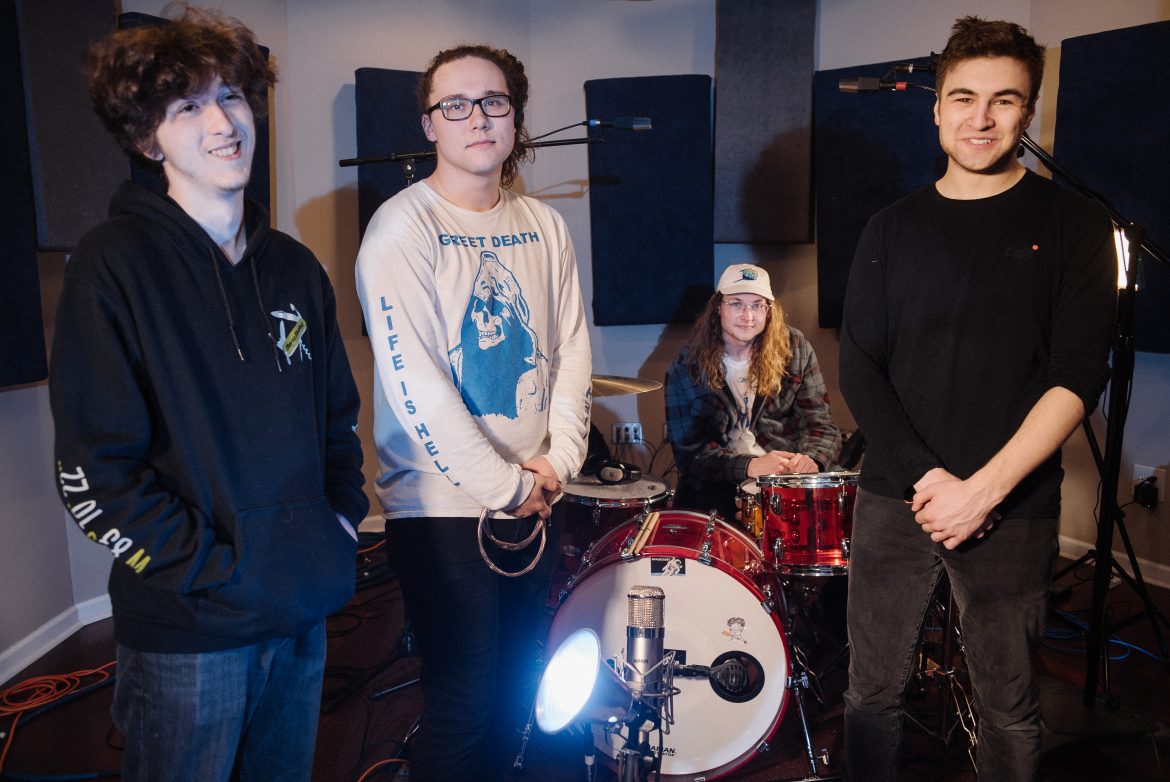 The Michigan music industry has sheltered at home and, because of empty bars, closed studios and abandoned concert stages, musicians and industry members are bringing their music live to the internet.

By streaming concerts, demo sessions and even simply putting together hang-out sessions for fans to stop in and chat, bands are finding new ways to carry on.

Detroit based punk outfit Dogleg is working to maintain prominence amid quarantine restrictions after releasing an album in mid-March.

Dogleg bassist Chase Macinski said, “We’ve been trying to keep up our social media game and just [keep] doing content essentially that we can keep churning out and keep getting people’s eyes and ears to.”

Included in this content are livestreams where fans can watch band members play video games, videos of live sessions and online concerts hosted through Instagram.

Dogleg and many other artists have performed as a part of  the HOP TV series of streams. Put together by the Philadelphia based booking company Home Outgrown,  HOP TV typically goes live at 3 p.m. on the company’s Instagram page, giving artists from throughout the Northeast and Midwest a chance to play sets from their own homes.

Mel Grinberg, owner of Home Outgrown Presents, said she got the idea watching other people put together livestream shows and decided to do it herself.

“I am the kind of person who goes hard when they commit to something, so I decided to do them daily and eventually decrease them to every other day. We encourage bands to not just play music but also get creative and have fun with their streams by playing games, doing Q&A’s and literally anything else they can come up with,” she said.

Other booking companies are setting up online sessions. Chicago based record label Audiotree is providing digital concerts through Instagram Live. Companies including the Common Ground Collective have even put together entirely digital music festivals.

Catherine Yi, one of the founders of the collective said, “We were inspired to put together the festival while working to set up individual livestreams for our bands who had shows and tours cancelled due to the pandemic. While thinking of organizing those, it started with us considering grouping all of the Common Ground bands together for a mini-fest, and then turned into us asking a bunch of friends and friends of those friends as well after realizing it’d be even better to have as many people involved as possible.”

Some artists discussed online festivals as an opportunity for musicians and fans to discover new music.

Macinski said, “It’s definitely a great thing for artists to do just to stay on people’s radars. It’s allowing, actually, for really interesting pairings of acts because you don’t have to get everyone to the same location. I feel like because of this we’re actually expanding the genre borders where it’s like ‘oh this is an emo fest, this is a pop punk fest, this is metal, this is rap.’ We’re kind of starting to see a lot more intersection because as long as an artist is willing to do it and has the resources to do so, fests are taking whoever wants it.”

In addition to keeping industry members at work, the streams have received positive responses from artists and fans.

Grinberg said, “Artists have been saying that it gives them something to look forward to and work on during these days where we all don’t have much to [do]. It’s been giving me something to do to keep me occupied and I’ve been having a lot of fun working with friends and colleagues to put these together. It’s good for morale!”

“We feel the [Alone Together] fest went pretty well! We had a lot of fun with it and received a lot of positive feedback from people saying it really lifted up their spirits that weekend, which was one of the main things we were hoping to accomplish with the event,” she said.

Nate Dorough, talent buyer for the Michigan-based booking division of Audiotree, said “I think it just gives us an outlet to be creative, when the rest of our business right now is just keeping the walls from falling in on us… When we’re all locked up at home, and just need something to get us through the day, even a poor-quality stream of Jim Adkins from Jimmy Eat World playing “The Middle” acoustic in their studio might be enough to get me through the day.”

Despite the positive reception of these streams, they are no replacement for live shows.

Macinski said “ It’s really hard to start up because you need to have the proper equipment for streaming, which is very different from recording. A lot of these places are like ‘all right we’ll just opt in to using Instagram’ and if we’re using Instagram then I have to use my cellphone and that kind of limits our capabilities. We get told we’re a very loud band and now you want us to play full band just through a phone speaker on Instagram live.”

Along with technical restrictions, there are concerns with the quality and prominence of these streams. Dorough criticized the lack of marketing efforts surrounding streams saying “Treat it like a show, promote hard!”

Chandler Lach of the band Ness Lake voiced his concerns about the lack of live shows.

“With all live performance spaces indefinitely shut down, it’s kind of daunting for artists in 2020. Streaming services have essentially gutted the music industry and leave mere crumbs for the original artists.

“Under these conditions, live performances are how most of the artists that I know scrape by. Selling merchandise and tickets is a crucial revenue stream for artists — especially small ones,” he said.

Despite these criticisms, there are very few alternatives.

Alongside streaming, many artists have taken to recording new songs and demos in their spare time. Lach is one of many artists using this time to create, writing a song describing his feelings about quarantine and releasing it as part of a multi-artist project titled “Quarantine Comp.”

Lach said the project was conceived by the band Thank You, I’m Sorry, which reached out and invited Ness Lake to be a part of the compilation.

“It was sort of an idea to stimulate ourselves and keep busy, but also to seek a little financial support in the face of the current crisis,” he said.

“It was a really fun project because the bar is usually set low for ‘lo-fi’ ‘self-recorded’ music, so it was kind of a creative exercise for me. It was a lot of fun, and really a privilege to be on a compilation with so many talented artists,” Lach said.

Alongside work on “Quarantine Comp” Lach has also performed on HOP TV and released other self-produced demos.

Tyler Floyd of Parkway & Columbia expressed optimism about the situation.

“Well, all I can say is I don’t think I’ve written my magnum opus yet, but if this quarantine lasts long enough, it may just get written,” he said.

Floyd has remained busy during quarantine, mixing and mastering the Dogleg live sessions as a part of Eureka Records and producing acoustic “fireside chats” for Parkway & Columbia’s Instagram page.

Despite many hardships, members of the music industry are still working to carry on as normal.

Grinberg said,“We all need something to pass the time, to give us motivation, and something to look forward to. It’s hard to maintain a sense of community when you can’t see your community, but thanks to the wonders of the internet we’ve found a way to maintain that even from a distance.”

On May 1, June 5 and July 3 Bandcamp will be waiving all fees on sales made by artists through the site in an attempt to aid artists impacted by COVID-19, including those referenced in this article.