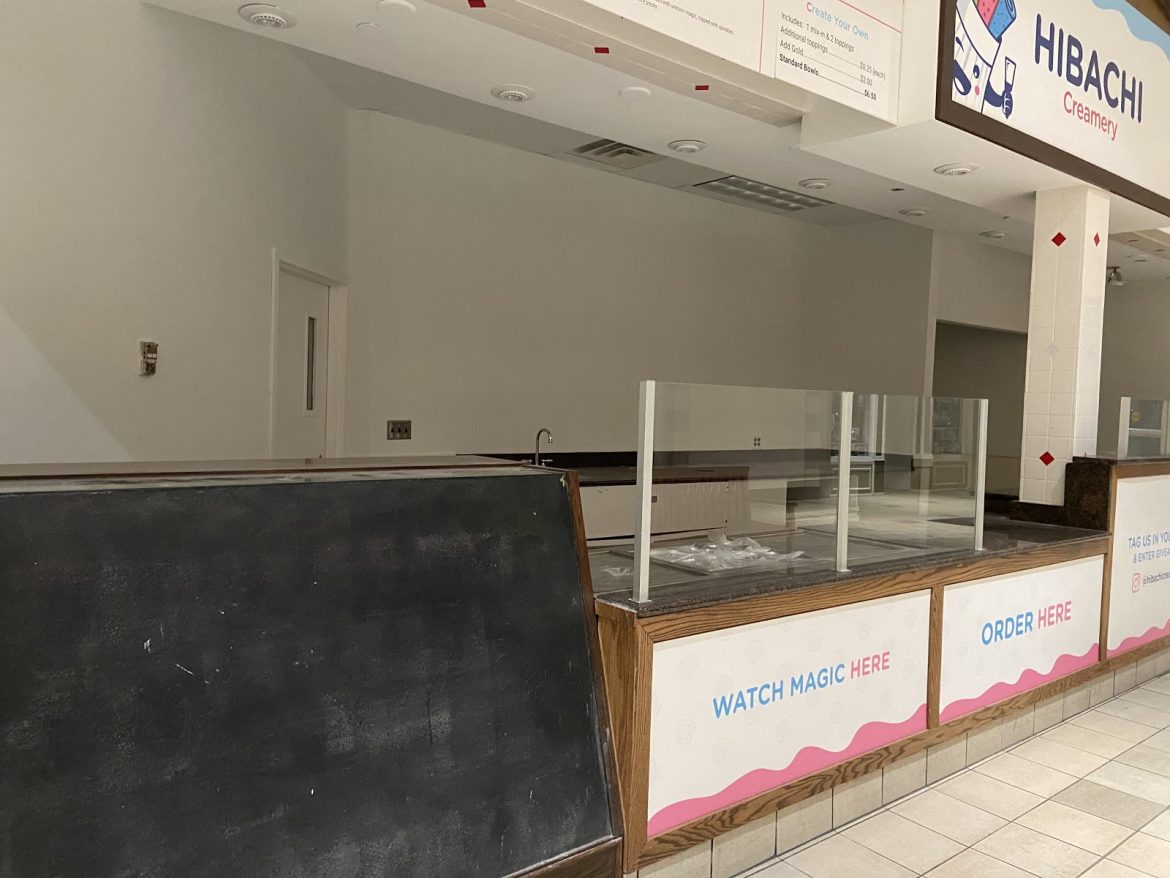 Pictured is one of the multiple closed down spots within Meridian Mall that was once occupied by Hibachi Creamery, known for their rolled ice cream.

Multiple stores in January have been shut down at the Meridian Mall that include: Express, Hallmark, Old Navy and others said mall employees but despite this, many still remain optimistic.

Meridian Mall still appears to have a significant amount of retail stores thriving said employees. Within the stores that are still open, the employees have gained respect for the stores that stayed.

Claire’s store manager Zana Lewis said she’s only worked at this fashion jewelry and accessory store for a few months, but mall goers are in high spirits.

“I’ve always liked retail,” said Lewis. “It’s great at a place like here. … Very rarely have I had a bad customer experience. This store is too positive and too happy for anyone angry to come in here.”

Lewis said she likes the location of Meridian Township because of how close it is to Michigan State University but is disappointed with store closures.

“I wish the stores would stop closing — that would be great,” said Lewis. “I feel bad for all the people that lose their jobs. It was like three stores that closed last week.”

Kayla Hays, a Gilbert Chocolates employee, said working in the mall she has seen several businesses close because of online shopping and the new businesses coming in are not realistic to the demographics in Meridian.

“As someone who works in the mall I would like to see a bit more diversity,” said Hays. “Because so many stores are closing and they aren’t bringing in interesting businesses. … People are shopping online more often. Old Navy just closed, Express just closed within two days of each other. … I think people would rather see a small business than a big chain.”

Similarly, Auntie Anne’s employee Matt Guthrie, a Meridian local of over 20 years, offered an anecdotal observation, when he said he sees new visitors coming from all over, which is a change.

According to an article written by Business Insider in 2019, their research suspected that between 20% to 25% of malls will close by 2022.

Despite industry forecasts, employees are grateful for the opportunities that the mall provides. Journey’s shoe store manager Virginia White, an Okemos resident said this is her first time working at a mall but through it she has created many friendships during her time as a mall employee and views her coworkers like family.

“We get along really well with all the other employees, and it’s kind of nice because certain employees come in and like, it’s like a secret club,” White said.

Employees see shifts regarding which stores are closing, but she argues that it is not a reflection on the lack of interest in visiting the mall itself but rather a reflection of the decrease in popularity of the actual stores that have closed.

“I know a lot of clothing companies that have been here for a while are kind of fluctuating- they’re not as popular as they used to be or their pricing like Express, was very expensive,” said White.

Residents of Meridian Township and beyond can keep updated on the mall’s recent news and status changes through its’ public Facebook as well as the website.

Check out the scenery at Meridian Mall:

Click the link to hear the natural sounds of the guests on their weeknight trip and see what Meridian Mall looks like on a casual weekday night.