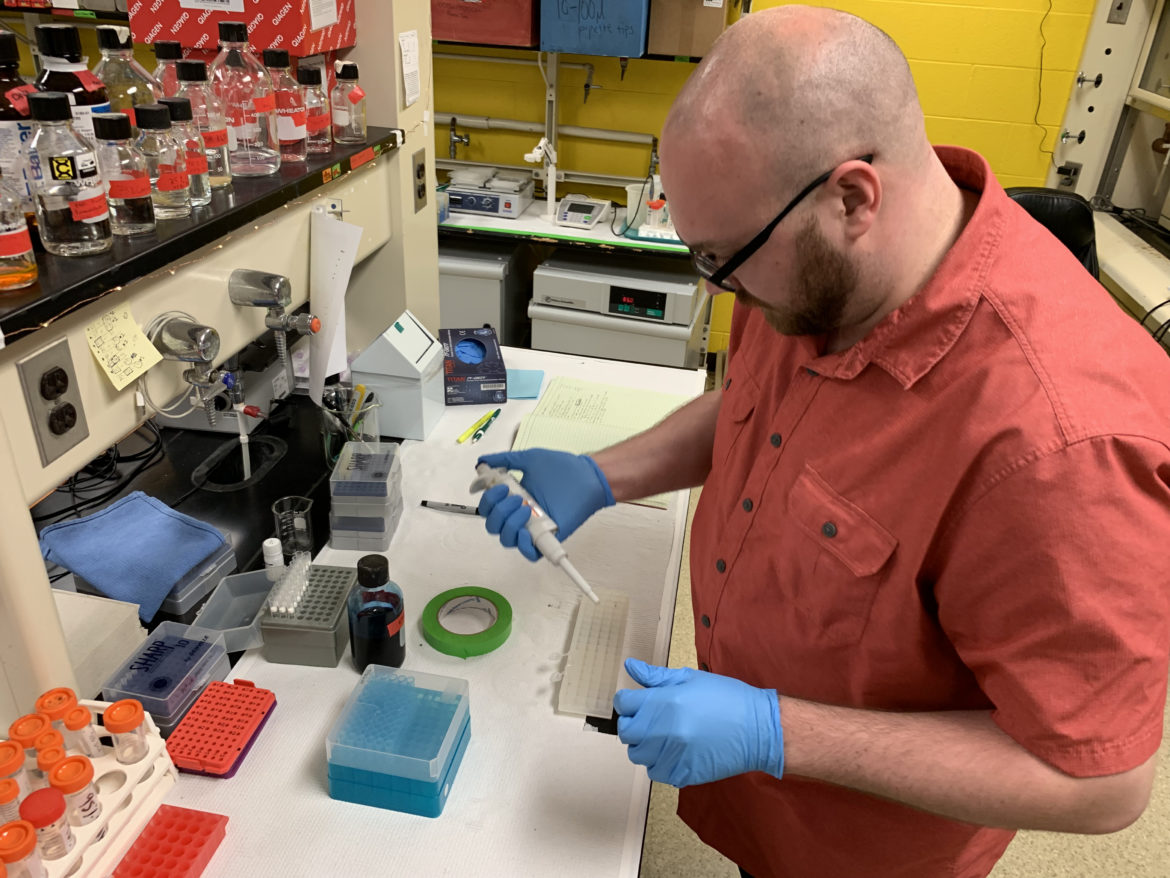 Graduate student Chris Gottschalk works on an experiment in a Michigan State University lab. Graduate students face a variety of pressures, from finances to family life, as they pursue their educations.

When Chris Gottschalk first entered graduate school as a master’s student, he didn’t receive any scholarships or funding to help pay for his education.

Now, as a Ph.D. student with a paid assistantship, he fusses less about money and how to pay for his education. That allow him to focus more time on academic endeavors, such as getting his work published in journals, which is important in many scientific fields.

But Gottschalk said he sometimes has to sacrifice his personal life to focus on his research.

“It’s hard putting my life on hold when I’m doing my work but I’m lucky because I’m doing something I love,” said Gottschalk, who works Michigan State University’s plant breeding, genetics and biotechnology program. “There’s a give and take, I guess.”

Gottschalk’s challenges are common occurrences for graduate students — and among several key issues that cause stress and hardship for students in master’s and doctoral degree programs. Students also commonly deal with a sense of isolation, according to mental health experts who work with college students.

Most graduate students pay for their tuition in one of two ways: out of pocket or by working as research or teaching assistants. Research and teaching assistants typically get help with tuition, receive a stipend, and may have other employment perks like health insurance. Non-employee graduate students face much of the same academic issues but have the added pressure of needing to find alternative sources of covering tuition, such as taking out loans, working additional jobs and hoping to shape class schedules around it.

Recently, at MSU, graduate student employees have been working to negotiate a new contract with the university. During one of several rallies, the student employee union gathered a crowd of over 100 people where speakers discussed wage issues, support for students with families and other university policies. Other universities, such as the University of Michigan and Wayne State University have had similar issues in the past as well.

Kevin Bird, a board member of the Graduate Employees Union at MSU, says many students have a family or long-term relationships and find it hard to juggle their studies and make rent on time. Even in cases where students work for the university, they often don’t make enough to support the needs that graduate school require

“This culture of overwork really feeds into isolation,” Bird said. “People feel like they’re failing their duty as a grad student if they’re not working enough, or if they take time to be social.”

The issue of isolation and not feeling like you belong, sometimes known as “imposter syndrome,” plague the university community at large, but especially graduate students, said Quaneece Calhoun, a pre-doctoral psychology practicum counselor at Wayne State University and a Ph.D. student at the University of Michigan School of Psychology.

Purabi Devi, a social policy and evaluation master’s student at the University of Michigan, said she has experienced isolation as a student in both her master’s program and as an undergraduate student.

Devi has spent the past seven years involved with U-M as a student and employee. She said a lot of her feelings of isolation comes from being disconnected from her peers. She works full-time and then goes to class in the evening, but does not have as much opportunity to interact with classmates.

“There are still instances when I feel imposter syndrome but … I keep reminding myself that I went to one of the best institutions in the country,” Devi said, “I got a degree without debt. I am valid. I belong here.”

In medical programs, many students feel like they aren’t smart enough to be there, said Wayne State medical student Amy Lewandowski. However, some universities are attempting to combat these negative thoughts. Students at Wayne State can seek resources to help them, she said.

Lewandowski said she sought therapy to cope with the workload she faces as a medical student and feelings that she didn’t belong in the program.

She said she was left feeling that she might not belong in medical school because she thought many of her peers were more accomplished before coming to the program. However, after talking through her problems, she said she was able to discern that others’ success did not mean she was a failure.

As a student who entered medical school directly after her undergraduate program, she is also among the youngest students. She said many of her peers took time off, worked in their respective fields and went to school for other degrees before entering medical school.

Other issues also can leave students feeling isolated. LGBTQ students and students of other minority groups many work with many other students or faculty members like them, which can lead to isolation. That can make speaking your mind in a tense experience almost impossible, said Cody Mejeur, a Ph.D. student studying English at MSU.

“It can be a professor saying something that is often unintentionally exclusive — but it can be a microaggression and those things can add up,” Mejeur said.

Mejeur said a professor once used the word “fag” to describe a coded-gay character in a book the class was covering. As the teaching assistant, Mejeur did not feel comfortable addressing the issue to the professor.

“It wasn’t quoting the text. He was just he chose to go to a really homophobic slur in order to try and — I don’t know what he was trying to do honestly,” Mejeur said.