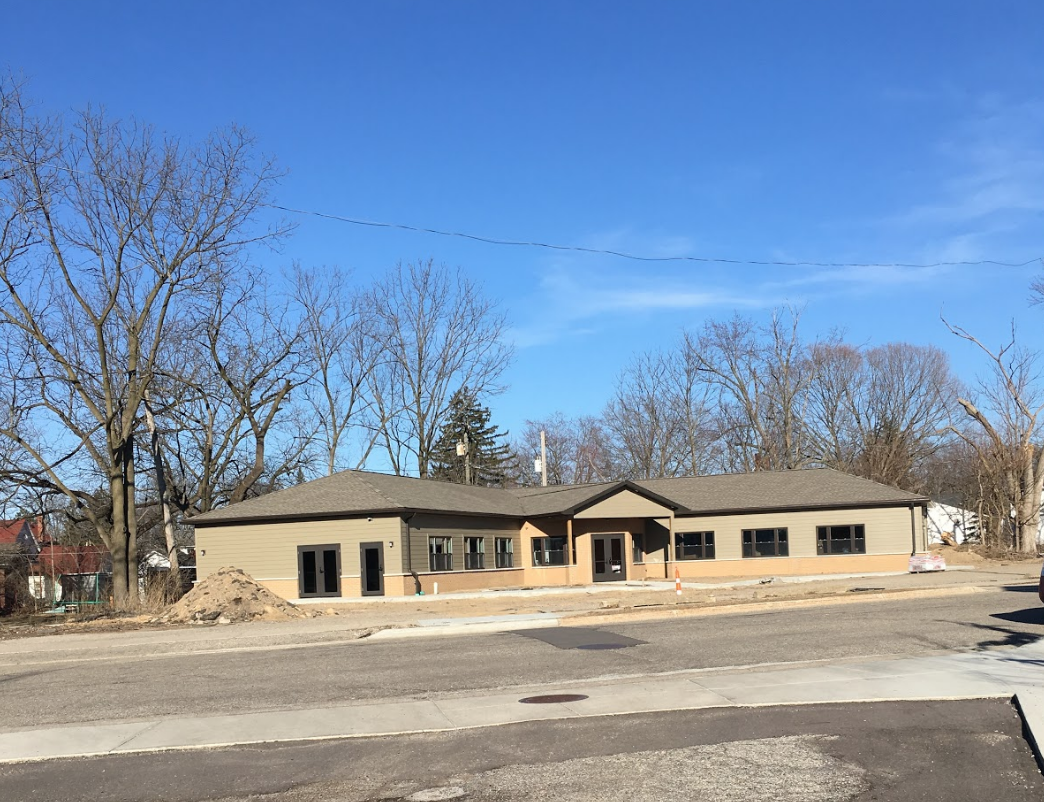 In the months to come, the Harold Larson Williamston Food Bank will be moving to 202 School St. in Williamston. This pantry will be like a grocery store for families to choose what they want within the given guidelines.

In 2018, the Harold Larson Williamston Food Bank was able to provide 81,390 meals for 144 families who walked through their doors. Recently, they have noticed there has been an increase in the number of children per month. The graph above shows data from the last three years on the average number of families, adults and kids that the food pantry helps.

The Williamston Foodbank is a pre-pack foodbank that provides food supplies based on the family being served. Jill Cutshaw, director of the Food Bank, said it has an area of the food bank that is called ‘client choice’ that allows families to fill up a bag or two depending on the number of people in their household.

Later this spring, the Harold Larson Williamston Foodbank will be getting a new home across the street from its current location. The building across the street will be just like a grocery store or client choice, offering families the option to pick what they would like. The Harold Larson Williamston Food Bank will soon move to 202 School St. in Williamston. This pantry will be like a grocery store for families, allowing them to choose what they want within the given guidelines.

The Food Bank, which is currently located at 201 School St., has been providing a hand up for families in the Williamston zip code for 66 years.

“The most rewarding part of volunteering is seeing everyone smiling,” said Dakota VanErp, who is now Head Boy Scout. “Knowing that I’m making a difference to them every day is a great feeling.”

“As time went on I fell in love with the idea of helping those who had nothing or who couldn’t afford new things,” VanErp said.

Kim VanErp became the treasurer for the organization in 2012 when she was temporarily filling in for an individual who had a health problem; however, she became hooked on helping people in her community and has remained in this position ever since.

In 1953, Harold Larson opened the Food Bank when he was diagnosed with polio, rendering him unable to work, VanErp said. “Harold is gone now, but his legacy lives on.”

Cutshaw began volunteering at the Food Bank when Larson was still actively involved. She said when she was the postmaster in Williamston, she started helping with the post office’s food drive. The Harold Larson Williamston Food Bank, located at 201 School St., serves low-income individuals who can prove residency in the 48895 zip code. However, the Food Bank also has a policy that will help an individual one time once a year if they are outside of the Williamston zip code.

“I just fell in love with him (Larson) and his wife,” Cutshaw said. “The mission reeled me in and after a while, I was helping not just with the food drive at the post office.”

Cutshaw has been the director for 20 years and has been making sure the Food Bank provides food and other services for families in need.

“Part of what we do is finding out the individual’s situation,” she said. “We try to stay current with resources to refer people to, often times being 211.”

More than just a Food Bank

The resource center based in Tri-County, 211, will refer people who call to a resource that can help with what they need. Cutshaw and VanErp said they find themselves directing people who need a little extra help to this resource.

“We wish we could, but we can’t help them with payments,” VanErp said. “Because we have so many families now that we can’t, but that’s when we refer them to other resources.”

“Because we get so involved it’s hard to treat everyone the same,” Cutshaw said. “However, we do our best and try to provide everyone with the same help.”

The Food Bank strives to help families in any way possible which is why they pride themselves in giving more food to families, especially when school-aged children are home for the summer.

In the summer, we send kids home with bags, VanErp said. “It’s extra food in the summer, normally more snacks.”

VanErp and Cutshaw also said money is a challenging variable in running the Food Bank, but so far they’ve sustained the service because of community donations. Cutshaw said that in the 66 years of the food bank, they have never actively fundraised.

“The money just comes in,” Cutshaw said. “We are the recipients of the 4th and 5th grade musical and Rib Fest that is put on by D&W Fresh Market.” Fundraisers for Piper’s Diapers, based in Williamston, helps the Food Bank to have a supply of diapers and wipes for families with babies and toddlers. The Williamston High School senior girls raise money for this organization during their powder puff football game every year.

Where does the food come from?

D&W Fresh Market in Williamston helps with the food bank in more ways than one. They donate their day-old bread and desserts, as well as food that is past the sell-by date. Their efforts don’t end at donating food since they communicate frequently with VanErp and Cutshaw if they get an overstock in a product. This is just one of the three freezers full of desserts and bread that D&W Fresh Market has been donating to the Food Bank.

“Besides getting donations from D&W we buy from the Greater Lansing Food Bank,” VanErp said. “We also shop Meijer 10 for $10 sales and regularly buy from Aldi.” The chart shows where the Harold Larson Williamston Food Bank receives and buys food. Food Bank directors said the amount of food it can purchase with money that is given is unbelievable, but it is because of the Greater Lansing Food Bank.

VanErp said the Food Bank has always been trying to increase the variety of food it can give out and making sure it’s healthy food too. Cutshaw said the pantry buys a lot of its food from the Greater Lansing Food Bank because most of their products sell for 18 cents a pound.

“Now since the Greater Lansing Foodbank has been created, we can do more,” Cutshaw said. “We have four freezers full of protein, plus extra turkeys from Thanksgiving and Christmas.”