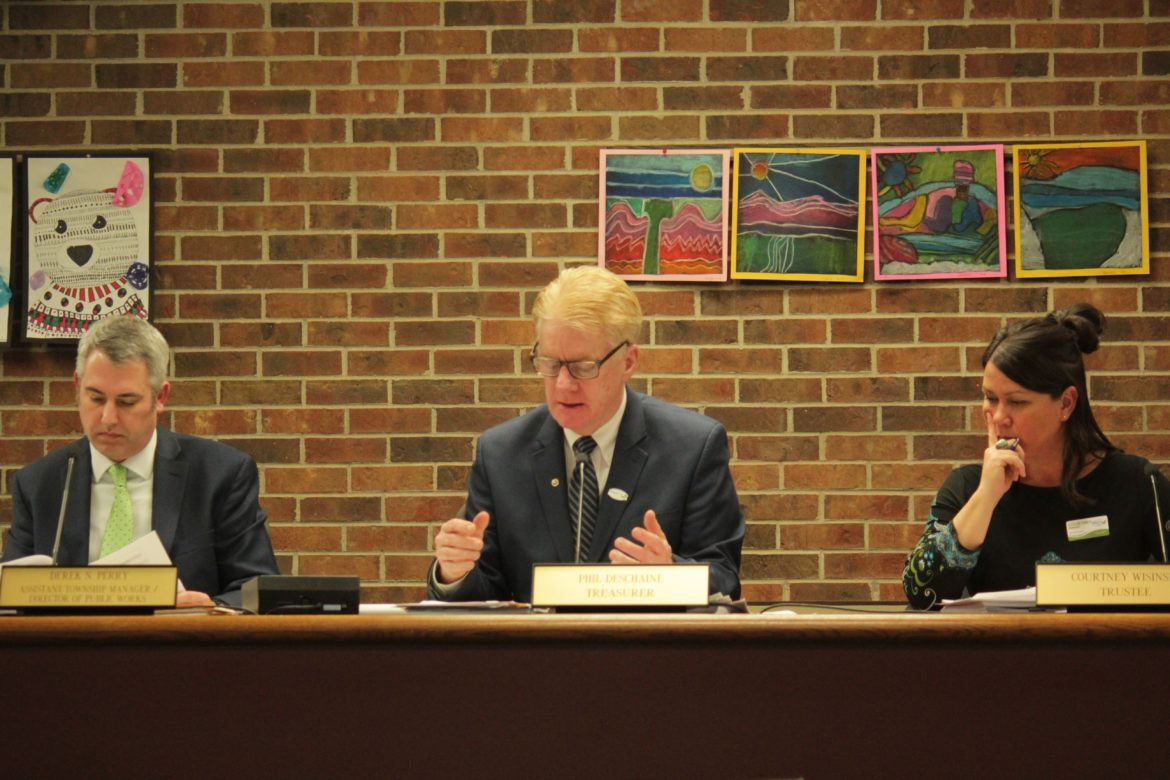 Meridian Township Treasurer Phil Deschaine asks a question about the boundary lines of the water main expansion during the meeting on Feb. 19.

The Meridian Township Board voted 7-0 in favor of the Grand River water main expansion that will bring water to a mobile home park and gas station.

The board supported Township Clerk Brett Dreyfus’ final special assessment role and set a date next month for a public hearing to discuss the project.

Dreyfus said this approval is a big deal for Meridian Township.

“We’ve had a long history with extending the water in this section of the township,” Dreyfus said. “There’s been issues and concerns about all of the ramifications of doing this at various times, but we all felt that this was the right time, and it was a public improvement that was needed.”

Dreyfus said they wanted the residents’ approval to go through with the plan.

Township Supervisor Ronald Styka said a couple of Meridian Township homeowners petitioned to be a part of the project to move it forward.

“We’re now going to have water available to areas that could be at risk if they were without water,” Styka said.

Residents of Winslow’s and businesses near Grand River Avenue will now have better, cleaner water for all of their drinking and cleaning needs, and it will also be available in case of fire issues at the gas station.

Winslow’s has dealt with fire-related issues in the past. A woman died in a fire at the park, and several additional people were left homeless after a fire destroyed their mobile home. The addition of water in this area is not only beneficial to the residents, but also the fire departments that aid this area.

Residents and board members see many benefits to the extension, and reacted positively to the community taking the next steps to make the extension happen.

Assistant Township Manager and Director of Public Works Derek Perry confirmed the logistics of the extension.

“Essentially, the work has been completed,” Perry said. “This is the next step in the process.”

Township Treasurer Phil Deschaine asked for clarification on the boundaries of the expansion. He questioned the inclusion of a number of homes and lots south of Bracken Woods Drive.

Perry referred to the map attached to the back of the plan’s document to indicate the included and not included areas in the extension. He said anything outside of the line drawn is not included, and will not be receiving water from the extended water main line.

“That’s as far east as our water supply goes,” Perry said, referring to the east end of Grand River.

More deliberation is set to take place on March 19, 2019, at a public hearing in the Meridian Township Office located at 5151 Marsh Rd.