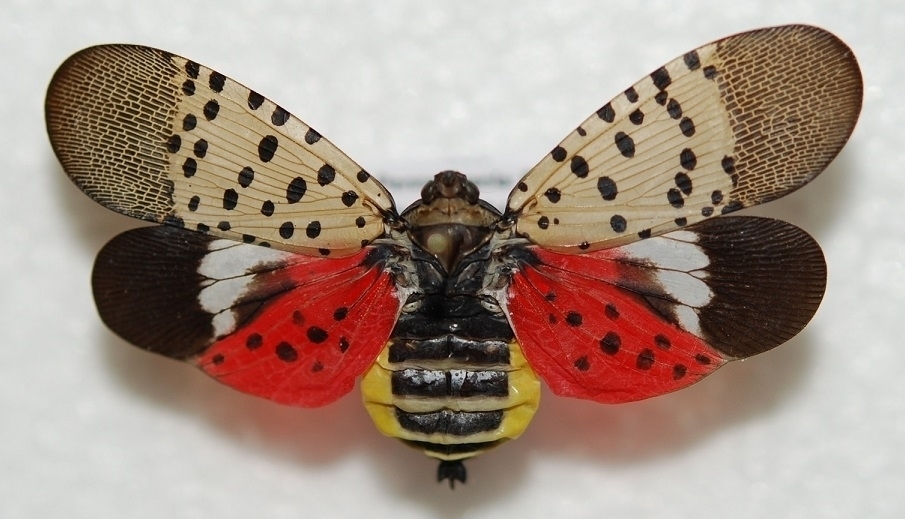 Residents are asked to be on the lookout for spotted lanternfly, an invasive pest that could make its way to Michigan.

LANSING — An insect that sucks the sap out of plants and a Japanese flower that chokes them out threatens Michigan.

“We put them on the watchlist now because we have a range of concerns,” said Joanne Foreman, the invasive species communications coordinator with the  Department of Natural Resources (DNR). “We want people to start watching out for them.”

The spotted lanternfly, an insect that sucks the sap out of a range of plants and crops, has been found in Delaware, New Jersey and Virginia. It’s making its way across eastern Pennsylvania, according to the DNR.

These insects can damage more than 70 plants and crops, including apples, grapes, cherries and hops, Foreman said.

“We are concerned because the spotted lanternfly has the potential to cause a lot of crop damage in Michigan,” she said. Residents are asked to be on the lookout for Japanese chaff flower, an invasive plant that could soon make its way to Michigan.

This plant grows in flood plains, Foreman said. When a river floods and the plants along the shoreline are washed away, Japanese chaff flower grows quickly along the bank. That makes it nearly impossible for anything else to grow.

“It creates a chain reaction,” she said. “If Japanese chaff flower grows on the bank, then no other vegetation can grow. If you lose that vegetation, you lose some insects’ homes and some animals’ food sources.”

But how do you know if what you’re looking at is an invasive species?

There’s an app for that.

The Midwest Invasive Species Information Network has an app that allows anyone with a smartphone to identify invaders.

The app was created by the Applied Spatial Ecology and Technical Services Laboratory at Michigan State University. It allows users to not only identify invasive species but to also report the sighting.

“There are over 400 species currently on the app,” said Claire Peterson, the data manager for the Midwest Invasive Species Information Network. “It’s very simple to use and can really help you identify what you’re looking at.”

The app is broken down into several sections, starting with plant or animal. The users then choose the type of plant they are looking for, such as algae or grasses. Then they can scroll through all of the invasive species of that type of plant. There are photos and fact sheets with each species to help identify it.

If the users believe they have found an invasive species where it hasn’tbeen reported, they can use the app to report their sighting.

Because of reporting by app users, there have been several cases of early detection and rapid response, Peterson said.

“We currently have over 23,000 registered users,” she said. “With so many people using the app, we can work to stop the spread of invasive species.”

The MINSIN: Report Invasive Species app is free to download and available through the app store on any smartphone.