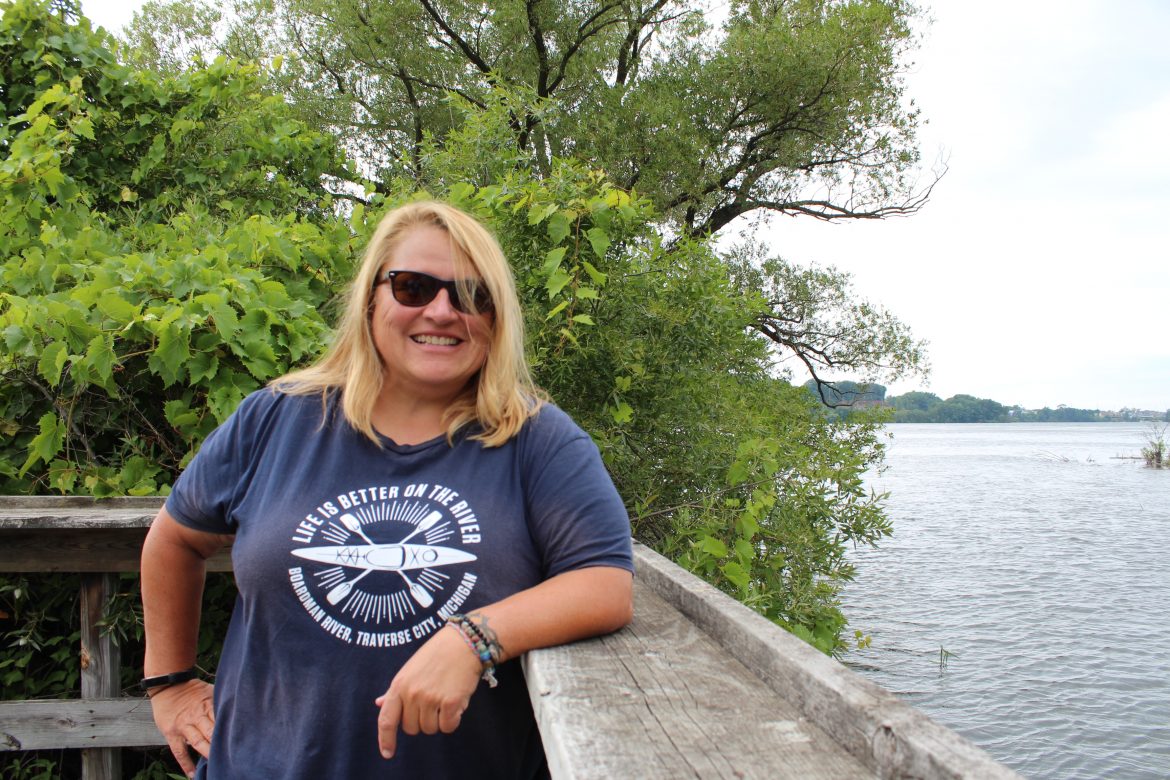 Tawny Miller of River Outfitters in Traverse City by the Boardman River.

LANSING — Tawny Hammond had known she was going to live in Traverse City since she was young.

“It just felt home to me. I felt like I belonged here,” Hammond said.

“There was something calling me. For me it felt rare, it felt remarkable and special, so I spent a lifetime trying to get here,” she said.

She spent more than 20 years working in parks and management in Northern Virginia, where her duties included community engagement, maintenance and programming.

While doing that, she drove to Northern Michigan four times a year. Aside from the fact that her in-laws live there, she’s always loved its environment.

Later, she moved to Austin, Texas, to become the city’s chief of animal services.

After about two years, she decided to retire and make her dream come true. She moved to Traverse City, bought a home by Boardman Lake and took over the River Outfitters, a company that rents kayaks, canoes, paddle boards and bikes.

“I was a customer of the River Outfitters for the past seven or eight years, and I would joke with the owner that I was going to come up and sling kayaks for him,” Hammond said. That’s exactly what she did last year.

She told the owner that she’d retired from her job, and the conversation turned to whether she’d be interested in running the business with him. He wanted to be out sailing by Grand Traverse Bay and needed help with operating the rental business. Hammond didn’t hesitate to say yes.

She took over the business after the Brown Bridge and Boardman dams were removed, projects that caused a controversy in the community as folks were divided between removing the dams to improve the health of the Boardman River or keeping them because residents grew up with the dams and hold special memories.

It’s still a point of tension in the community, as Hammond quickly learned.

She supports the dam removals because they were falling apart, no longer generating electricity and costly to take care of.

Hammond said she doesn’t think her business will lose anything when the Sabin Dam is removed soon.

Rather, she predicted it will gain more customers for her. “That’s going to open up the river because you’ve already removed two other dams, and so people would be able to paddle down the river unencumbered without any portages. I think it’s going to be beautiful.”

Asked what she thought of the residents who’ve lived there for generations and grew up with the dams, remembering their first time fishing or kayaking on the Boardman.

While she said she empathizes with them, she pointed out that the river doesn’t belong to anyone but to the earth.

By greater good, she means restoring the river’s native brook trout and lowering the water temperature so the river becomes a cold water stream again.

Additionally, she said she’s educating the community and visitors about the importance of the river. Her goals include working with the Grand Traverse Band of Ottawa and Chippewa Indians on the history of the stream, and how the river’s name was changed from Ottaway River to the Boardman River.

“We all want to be thinking about our legacy. I want my legacy to be the one that I made the world a little bit better in the places that I touched,” Hammond said.