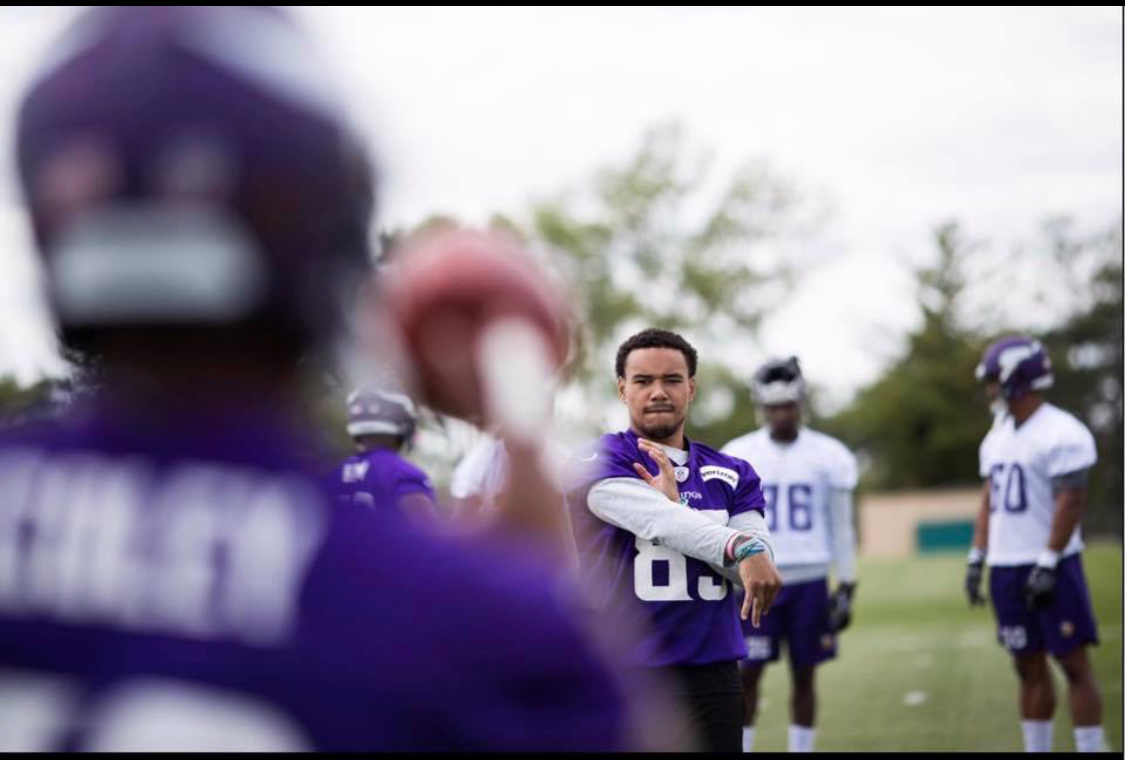 R.J. Shelton works through drills during training camp with the Minnesota Vikings. Shelton was signed as an undrafted free agent following the 2017 NFL draft.

There are only 32 picks in each of the seven rounds in the NFL draft. Yet there are more than 16,000 NCAA players who are draft eligible, according to the NCAA.

But the draft is not always the end for players pursuing professional careers. Michigan State a streak of players being drafted in the NFL going back to 1941. Some NFL players are memorialized in the Skandalaris Football Center.

Former Spartan wide receiver R.J. Shelton went undrafted in 2017, but the Minnesota Vikings saw something in him and signed him to the team for training camp. Shelton said his transition from college to the pros was simple.

“I prepared myself like I was in the NFL when I was in college by watching film and learning the playbook inside and out, so I can play at a high level,” Shelton said.

Though Shelton’s stay in the NFL only lasted one season, he continues to try to make it in the sport. He has signed with the Canadian Football League’s Ottawa Redblacks, where he is once again teammates with fellow Spartan alumnus Darien Harris.

Michigan State has 27 active players in the NFL, according to the league. That doesn’t count current free agent players, who have hopes of securing contracts with one of the league’s 32 teams. The Spartans also have a streak of players being drafted that dates back to 1941.

Ryan McCumber, a leading contributor to Michigan State’s page on Fansided, a fan site featuring sports, movies and TV shows, thinks this year’s draft class has a few members that could make an impact in the NFL. He said many of the guys that come out of Michigan State are tough and gritty players.

“Some guys are late bloomers. It depends on how you develop.” McCumber said. “I think Gerald Holmes is a guy who can man an impact on a roster as a third-down back.”

Joe Janosik may not know what it is like to play football at a collegiate level or higher, but he knows the X’s and O’s of the game. The MSU sophomore played high school football in Ohio, prime recruiting territory for MSU’s coaching staff, and also volunteers as a coach at local high school near his hometown of Piqua, Ohio.

“You can look at a running back who runs a 4:31 40-yard-dash and drool over a lineman who put up 42 reps on the bench press, but you can’t overlook effort,” Janosik said. “If your motor is as high as any other player in the draft, they’re going to give you a chance because they see how hard you work and how determined you are to succeed.”

Shelton said that hard work is important. He said it’s important for players aspiring to the NFL to perform at their highest level.

“You want to see where you match up with those athletes to see if you put yourself in that category,” Shelton said. “For me, I want to be put in that category so I bring it every time I step on the field.”

Michigan State has a smaller group of NFL prospects this year, with a smaller graduating class of players and no early departures. Here are the four players who analysts generally think could make it in the NFL: