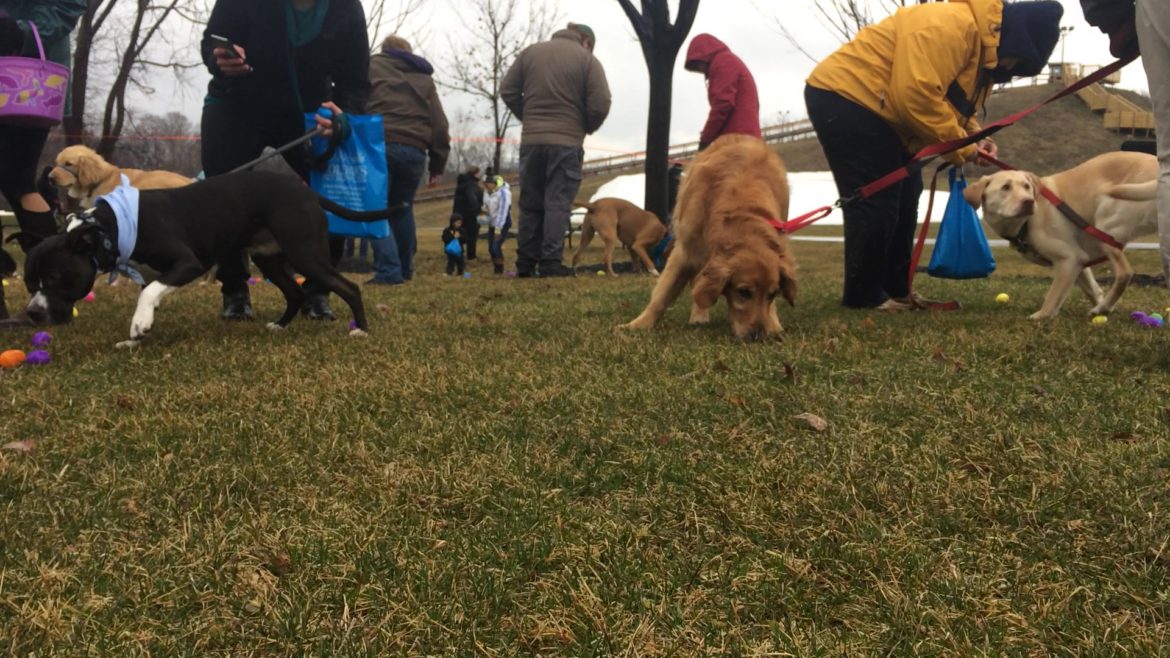 Some of the larger dogs trying to sniff out treats during the March 31, about 20 volunteers from the Ingham County Animal Shelter Fund's Easter egg hunt on March 31.

It was a windy and rainy day at Hawk Island Park in Lansing, but dogs still showed up to hunt for some treats.

On March 31, about 20 volunteers from the Ingham County Animal Shelter Fund spread 1,000 plastic eggs filled with grain-free treats across the grass, and dozens of dogs lined up to sniff them out. There were three separate sections for each size of dog.

Once the announcer gave the go-ahead, they were off. Small, medium and large dogs sniffing the ground and occasionally coming across an egg with a prize inside.

Afterwards, many of the dogs and their partners quickly sheltered under the large roof next to where they had been hunting to escape the winds and rain.

Some of the eggs didn’t contain treats, but instead a bigger surprise: Seven winners received a gift basket of even more goodies. Amanda Gilpatrick from Lansing and her dog Ditto were one of the teams that won.

“It’s absolutely filled with treats,” she said about her basket. “She’s going to be very happy.”

Jennifer Schuster heard about the event on Facebook, and she wasn’t going to let a little rain ruin a good time with her dog, Charlie. However, after the hunt, she was quick to get to her car.

We’re going to go home and get warm,” she said as she walked Charlie to their car.

Ashley Shaffier, a board member of the Ingham County Animal Shelter Fund, said she was happy with the turnout considering the conditions.

“I don’t think anything would have stopped this event,” she said, “the dogs were troopers and they braved through it.”

This was the fourth annual Dog Easter Egg Hunt put on by the organization. There were also other activities such as agility training.

The next event to be put on by the fund will be the Woofer Walk, a 5K in which participants can run competitively or casually with their dogs, on May 19 at the MSU Auditorium. You can visit http://icasfund.org/ for more information.

A journalism major with a focus on sports at Michigan State University. Have covered stories on campus, East Lansing, and Lansing. Always improving video and video editing skills and likes creating video packages as well as writing.