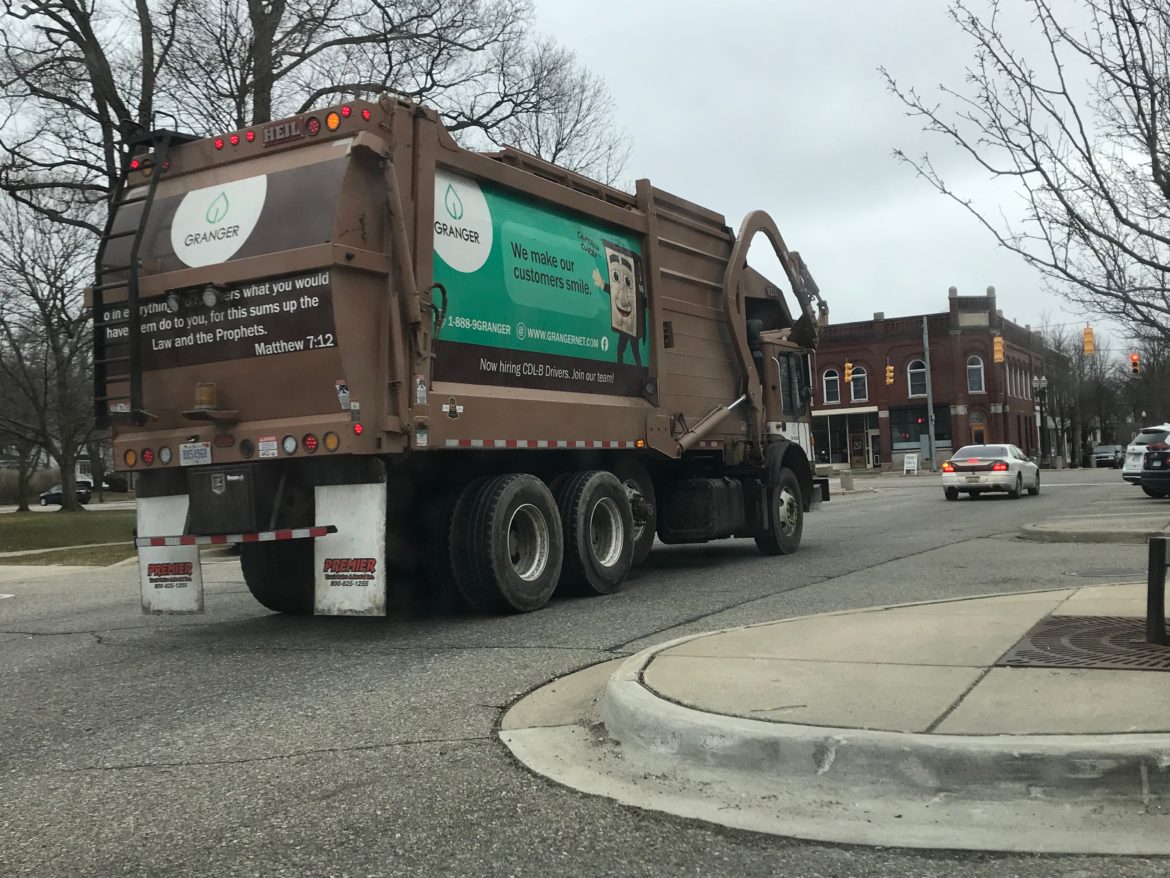 Mason has been doing its part in protecting the environment for quite some time and as the city keeps growing that doesn’t seem to change with companies like Granger and Cleanlites Recycling.

Mason resident Kevin McCoy said, “The waste pickup runs through end of April through October, put those up front and that comes on Fridays … They’ve always picked up the waste, right now they just got into recycling.”

Granger provides the Greater Lansing area with waste hauling, disposal and recycling services for commercial, residential and industrial customers, according to the Granger website.

Breina Pugh, community relations coordinator at Granger said, “In Mason we provide residential waste and recycle pickup as well as other cleanups throughout the community.”

With the waste and recycled materials Granger picks up, they’re doing a number for the environment by picking up the waste and how they maintain what they collect.

“We try to provide an all around safety, us collecting the waste keeps the city clean… we take all the waste to the Wood Road landfill and we make sure we’re protecting the water and land by putting in liner systems to make sure nothing, especially liquids in the waste, is getting into the ground to contaminate it which could also lead to contamination of the water,” Pugh said. Philip O’Leary, engineering professional development professor and expert on landfills and solid waste disposal at the University of Wisconsin-Madison said, “When recycling you have to be careful the manufacturer doesn’t have a negative impact, if they’re recycling wood to make mulch then they have to be careful the dust doesn’t release into the air, and other stuff like that could release toxins into the air or ground when you put it through the shredder.”

“All of them contain hazardous wastes which should be recycled but what other companies do is they’ll resell the stuff they get, like computers some people will try plugging it in to see if it still works and try to make a profit out of it … we’re not allowed to do that by law,” Love said.

Recycling waste and other materials benefits the environment in more ways than none, which is why it’s so important to keep enforcing it in Mason. O’Leary said, “It reduces the need to do mining or drilling of oil, another benefit is it has less of an impact on natural resources… it can also save a lot of energy, by recycling a simple aluminum can and reusing it is already using less energy then just making a new can. The process of re-manufacturing takes less energy, less emission, less natural resources and less waste disposal then simply making a new one.”

“China has been facing a problem in recent years with electronic emissions being released into the air because we and so many other countries have been sending over large materials to be recycled and they’ve now set a standard to what they’ll accept and that could cause problems to third world counties and possibly us down the road,” O’Leary said.

Recycling the waste keeps it out of the landfills as well as the ground which is why it’s so important to recycle and keep them from hurting the environment, said Love.

Instead of waiting for the waste pickup every week some may think that it’s easier to get rid of everything by burning it, but Mason has enforced that rule on the residents about burning certain yard waste. Chart of some cities in Ingham County and the population to waste comparision as of 2008. Stats by Ingham County Solid Waste Management Plan, chart by Ian Kress.

Pugh said, “There are certain rules about burning stuff such as leaves, branches and other stuff like that … since we offer a weekly pick up service many people don’t feel the need to do that as much which is good for the environment. In some areas you need a permit by the city to burn stuff but most of the time it’s better off if they don’t.”

McCoy said, in his area (Maple Street) no one is allowed to burn anything at all.

For new residents to Mason or the Greater Lansing area, Granger will let them know the services they provide and also tell them how to put the cans out on the street so that the trucks can pick them up easily without any problems, said Pugh.