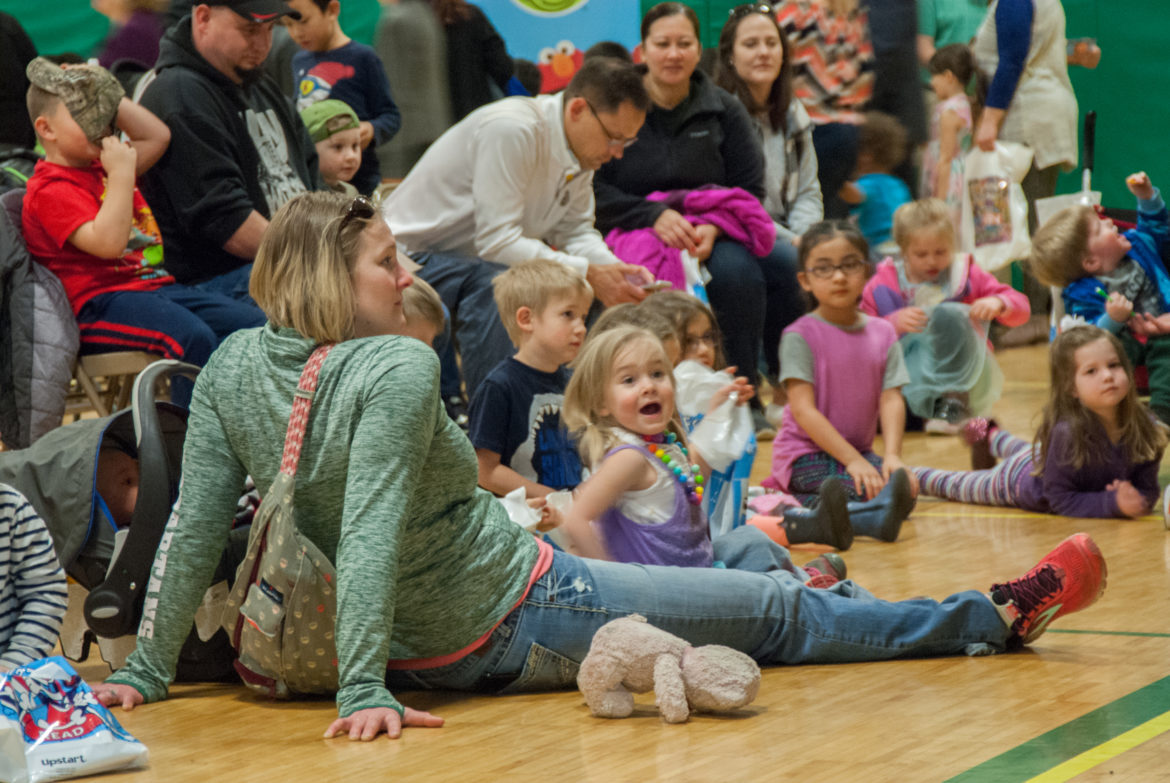 A long line of people waits inside the Hannah Community Center, reaching almost all the way to the front doors. Parents with baby carriers and strollers stand chatting with each other. Children scamper up and down the hallways. The crowd has gathered for an unlikely reason: to celebrate early literacy.

Early literacy is lagging in Michigan, where overall reading levels have been in decline since 2003 and only 44 percent of third-graders are proficient readers, according to 2016-2017 state assessment data from the State of Michigan Education Report. This comes after Michigan’s investment of over $76 million in early literacy over the past three years.

According to the Michigan Department of Education website, the period between K-3 is a critical period in literacy growth, after which the “chances of becoming proficient are minimal.” In East Lansing, the community is tackling the issue of early literacy in a variety of ways. Michigan is currently 41st in the nation when it comes to fourth-grade reading. Data from 2018 State of Michigan Education Report. Graphic by Sarah Horton.

“I always tell students that nobody wakes up literate,” said Patricia Edwards, a literacy expert and professor in the Department of Teacher Education at Michigan State University. “Those things have to be taught.”

But teaching literacy isn’t as straightforward as plopping a kid down with a book. There are many levels to literacy education and the roles and responsibilities associated with it.

“Literacy has to do with being able to read, being able to write, and having that knowledge of what goes into reading and writing, but literacy is definitely a multifaceted thing,” said Eva Weihl, youth services librarian at East Lansing Public Library.

Edwards said that literacy starts at home and goes beyond basic reading capabilities. She said parents should practice “literacy coddling” early on, immersing children in environments and activities that encourage literacy growth outside of school.

“Children who come to school and they’ve been marinated in the literature and soaking and dripping with print, they have a better understanding of how school works and they are supported,” said Edwards.

According to Weihl, lack of early literacy training at home is one of the reasons why some kids don’t meet standardized reading proficiency levels.

“The teachers now kind of don’t have as much room to lay that foundation,” said Weihl. “[Kids] are kind of expected to come in with a certain degree of skills.”

The differences between children who have received early literacy training and those who haven’t can be striking. “Children who typically aren’t read to enter kindergarten with about 300,000 words less than a child who is read to,” said Robin Pizzo, director of education at WKAR, who previously taught at Lansing schools for about 15 years.

As for parents whose children have already entered the school system, catching up or finding the time to practice literacy education at home can be a challenge.

“I just don’t know how young parents do it,” said Diane Tubbs, a resident of East Lansing who has an adopted daughter in third grade. “No wonder they’re so stressed out.”

Tubbs, an adoptive grandparent, said her family is a “reading family” and her third-grade daughter’s literacy education has been a priority from the start. In order to improve her daughter’s reading proficiency, Tubbs said her daughter meets with a tutor twice a week and participates in after-school programs. According to Tubbs, finding the time to balance these activities can be difficult.

According to Tamsyn Mihalus, an East Lansing resident whose daughter attended East Lansing schools, having Michigan State University as a local presence is another pressure on parents.

“I think there’s a higher expectation of parents, a lot because of the university, I think,” said Mihalus. A list of Michigan’s approaches to early literacy in the past. Data from 2018 State of Michigan Report. Graphic by Sarah Horton via Adobe Spark.

Weihl said she sees the role of parents, caregivers and educators as a partnership when it comes to teaching children literacy skills. Pizzo’s viewpoint is similar.

“As an educator, I’m a partner with parents and my goal is to support them as being their child’s first teacher,” said Pizzo.

For Kristin Morgan, center director for East Lansing KinderCare, involving parents in reading practices in one aspect of her work. In celebration of March is Reading Month, Morgan said that parents and children participated in book-themed days and kept reading logs together.

Parents and educators are facing increased pressure to bring third-graders up to speed due to the third-grade reading law beginning in the 2019-2020 school year, which, according to the Michigan Education Association, will retain students in the third grade if they fail to pass the state’s annual reading test.

Upholding national and state standards while accounting for each individual’s reading pace and learning methods is an ongoing challenge.

Morgan said keeping literary activities interactive can help some children learn. According to Morgan, at KinderCare children sometimes perform motions or wear clothing to help them engage with a story.

Weihl said it is interesting to see how each child learns and processes differently.

“Each child learns at their own pace,” said Morgan. “They are all different learners, just as adults we are.”

Jeanne Loh, a mother and professor in the Department of Teacher Education at Michigan State University, said one of her sons struggled with pacing and word order.

“I had to figure out how to help him in a way that wasn’t impeding his learning to read,” said Loh. Connie Schofield-Morrison reads aloud from her book “I Got the Rhythm” at the Hannah Community Center on March 18, 2018. Photo by Sarah Horton.

Connie Schofield-Morrison knows well the importance of recognizing the different ways children learn. Schofield-Morrison, a children’s author and mother of five, said some of her teachers thought she had a learning disability growing up because she absorbed information differently.

“I would have to say it forwards, say it backwards, I just would not get it, especially with math,” said Schofield-Morrison, “But if I sang it, for some reason, I got it.”

Schofield-Morrison’s book “I Got the Rhythm” incorporates visual and musical themes to engage children with different ways of learning. Schofield-Morrison co-created the book in 2014 alongside her husband, illustrator Frank Morrison. It is currently part of Ready to Read Michigan, a program that supports library efforts to promote early literacy. Today, technology also plays an increasing role in early literacy. Although it is sometimes seen as the antithesis of all things literary, technology has become an important literacy tool.

“The games for the kids today, a lot of them teach them reading and they have to read so that’s a real big plus,” said Tubbs. “[My daughter] has a video game that makes her read everything before she goes to the next step, so that’s kind of cool.”

Weihl said East Lansing Public Library has a monthly event called iPad StoryTime for children ages 3 to 5 in order to emphasize a different way of learning and encourage technology literacy. Weihl said she encourages parents to draw a distinction between active and passive technology consumption.

“When you’re interacting with screens or tablets or phones, as much as possible you should be there with your kid doing it together, talking about it,” said Weihl.

“It’s about getting their attention, getting them interested in reading,” said Mihalus, who paid weekly trips to the library as a child. “Back then there were distractions, there are different distractions now.”

Between juggling all of the different methods and challenges of early literacy training, some say East Lansing is a uniquely conscious community when it comes to early literacy.

“I think East Lansing has a lot of resources and part of it may just be because we are a college town,” said Weihl. “I think there’s a big emphasis on learning and knowledge and expanding your boundaries beyond just what you have personally and internally.”

Moving forward, Pizzo encourages the community to face the challenge of early literacy head on and instill reading values in children from an early age.

“If you can capture them at that time then you really do set them on a great path, a great trajectory toward success in reading long-term,” said Pizzo.